The Duke of Sussex said he ‘never’ thought his family’s protection by British police would be pulled after they stepped down as working royals.

Harry said he had reassured his wife on the issue. ‘M asked me, ‘Would they remove our security?’ I said, ‘They’ll never do that.’

‘Meghan’s background, her heritage, the well-documented hate campaigns against us, suspicious packages being sent to the palaces, specifically with her name on or my name on. ‘She said, ‘Do you think they’ll do it?’ I said, ‘No, they would never do that.’ And they did it.’

Harry said his family’s security was removed on March 31, 2020, leaving him with less than three weeks to make arrangements. He claims his family were left at their most vulnerable after announcing they were stepping down and found themselves ‘completely surrounded’ by the press on Vancouver Island in Canada. 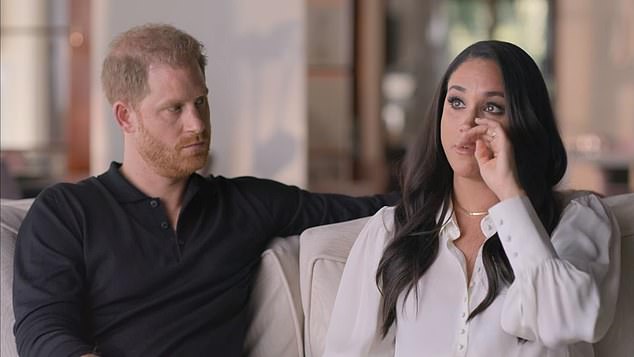 The Royal Canadian Mounted Police said at the time that it had, at the request of the Metropolitan Police, been providing assistance to Scotland Yard officers, but said that would end when the Sussexes’ status changed.

The duchess broke down as she described receiving death threats and fearing her children would not be safe. Harry and Meghan’s deals with Netflix and Spotify have since enabled them to pay for security.

But the duke has launched a legal action against the Home Office over their security in the UK.