Prince Harry was ‘desperate to avoid’ his brother William at the Easter church service attended by the Royals on Sunday, claims body language expert

Prince Harry was ‘desperate to avoid’ his brother William at the Easter church service attended by the Royal family on Sunday, claims a body language expert.

The Duke of Sussex walked ahead of his brother into the service at St George’s Chapel in Windsor, fuelling speculation they are feuding.

Speaking to The Sun, body language expert Judi James said: ‘Even the act of arriving and leaving the Easter service separately was guaranteed to deepen speculation of a widening rift between William and Harry.

‘But it was Harry’s peculiar body language behaviour once he was in closer proximity to his brother that really added to the huge question that has been hanging over their heads for months.’ 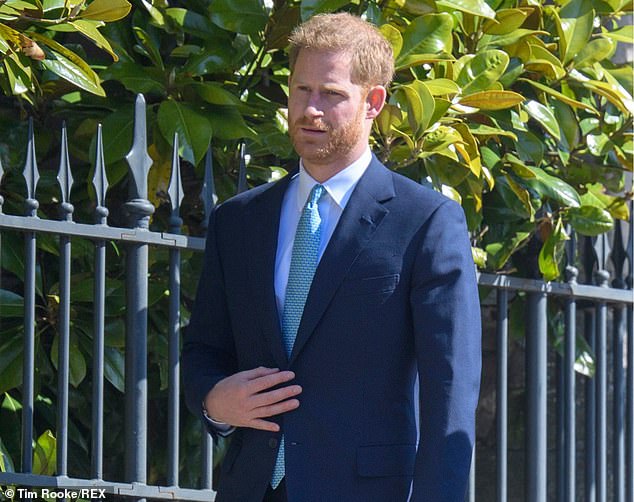 Prince Harry arrives at the service at St George’s Chapel in Windsor on Sunday. His heavily pregnant wife Meghan did not attend the service

Harry’s pregnant wife was not in attendance at the event and neither was the Duke of Edinburgh who has retired from royal duties.

The Duke of Sussex could also be seen chatting away to his cousin Ms Tindall, but appeared not to speak to his brother amid rumours of a possible rift between the pair.

The language expert added Harry appeared ‘desperate to avoid’ the Duke of Cambridge.

She said: ‘Harry, Kate and William had always been so well bonded but suddenly it was Harry looking serious and using body language cues to hint at some heightened levels of anxiety when he was with them.’

On the same day the Queen celebrated her 93rd birthday which coincided with the most important day in the Christian calendar. 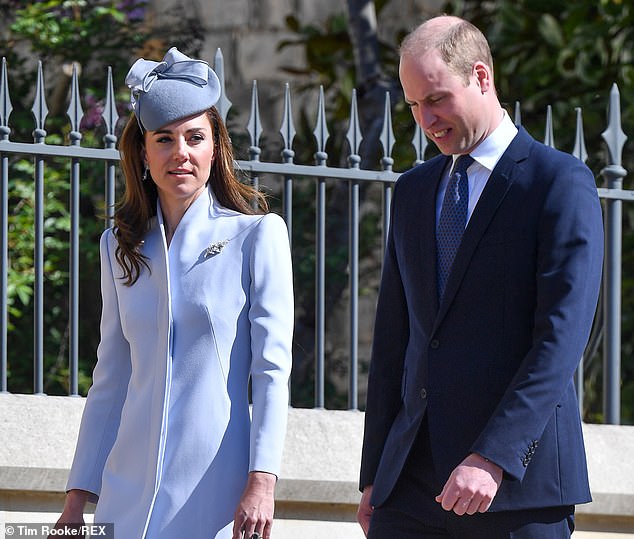 Kate Middleton and Prince William arriving at the Easter service on Sunday. The Duke of Cambridge did not walk in side-by-side with his brother as he normally does

Following an hour-long service, the Queen was presented with two posies – one yellow and one white – by two little boys, before being treated to a celebratory chorus of Happy Birthday by crowds gathered outside in the sun.

As the well-wishers completed three cheers, the Queen waved to them as she got into her waiting car.

Royal family members who attended the service included the Princess Royal, her husband Vice Admiral Sir Timothy Laurence, Zara and Mike Tindall, Princess Beatrice, the Earl of Wessex, the Duke and Duchess of Cambridge, and the Duke of Sussex.

Anne’s son Peter Phillips and his wife Autumn, and Edward’s wife the Countess of Wessex and their children Lady Louise Windsor and James, Viscount Severn, were also in attendance at the chapel.

April 21, the day the Queen was born, is the first of the monarch’s two birthdays.

She also has an official one on the second Saturday in June each year, which is commemorated with the Trooping the Colour parade.

Gun salutes are also fired as a mark of respect to the Queen on her special day – but never on a Sunday, so this year they will be delayed by one day.

On Monday, the King’s Troop Royal Horse Artillery will ride their horses and gun carriages past Buckingham Palace en route to Hyde Park to stage a 41 Gun Royal Salute at noon.

A 62-gun salute will also be performed by the Honourable Artillery Company at the Tower of London at 1pm the same day.

With the death of 88-year-old King Bhumibol Adulyadej of Thailand in 2016, the Queen now holds the record for the world’s longest reigning living monarch.