London: Friends insist they have no misgivings over the controversial decision to step down as senior members of the royal family.

Yet the latest outpouring from the Sussexes more than hints at an undercurrent of bitterness. 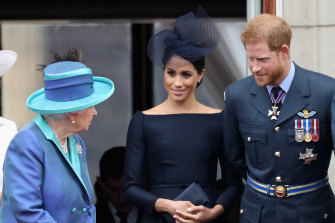 The couple have announced they are giving up their plans to build a personal foundation.Credit:Chris Jackson Collection

If Harry and Meghan were truly content with how things have turned out, they surely would not have felt the need to publish a 1033-word "update" on their website, laced with thinly veiled barbs at "The Firm".

No regrets? The couple's markedly pointed reaction to being stripped of their royal status smacks of that infamous celebrity catchphrase: "Don't you know who I am?"

Should anyone be left in any doubt of their ongoing status, they remind us that "as the grandson of Her Majesty and second son of the Prince of Wales", Harry is sixth-in-line to the throne while the Duchess has her "own independent profile". That they remain a "valued part" of Her Majesty's family is underlined for effect.

Other titled members of the royal family have been allowed to seek employment, but we are subject to a 12-month review, they gripe.

Next year's appraisal was designed to give them a chance to rethink their position, but by spinning it as an impediment to their independence they insinuate that they are being made examples of (seemingly forgetting they chose to make examples of themselves).

They reiterate that "no new appointments will be made to fill Harry's military roles before the 12-month review… is completed" in an apparent swipe at reports Princess Anne would be taking over his role as Captain General of the Royal Marines.

Similarly, the suggestion that their "preference was to continue to represent and support the Queen" albeit in a more limited capacity, has echoes of Harry's misjudged Sentebale speech blaming the monarchy for refusing to allow them to have their royal cake and eat it.

It isn't their fault their office has had to be wound up with the loss of 15 staff – it was down to Prince Charles's "primary funding mechanism" drying up, they claim, reminding readers they were prepared to give up the Sovereign Grant (but not, it seems, Daddy's Duchy dosh).

They only trademarked the "Sussex Royal" brand "as a protective measure", they insist, suggesting the Cambridges had done the same for their foundation. (The fact that applications were made for goods from clothing and books to stationery and bandannas is conspicuous by its absence – although apparently William and Kate trademarked teatowels and the like).

Even the concession that they "do not intend to use 'Sussex Royal' or any iteration of the word 'royal' in any territory" after the end of March, is not made without a degree of rancour. They selflessly agreed to drop the "royal' even though "there is not any jurisdiction by The Monarchy or Cabinet Office over the use of the word 'Royal' overseas".

There is a certain irony about their claim that the sharply worded salvo is to "mitigate any confusion and subsequent misreporting" when in fact all it serves to do is confirm the accuracy of what has been reported.

There is no disguising the couple's contempt for the media as they once again question the "supposed public interest justification for intrusion into their lives" – while in the same breath insisting they must retain their taxpayer-funded bodyguards.

Rebutting claims they plan to start a "Foundation", despite their website stating that they are "actively working to create… a charitable entity", the couple's quest to "effect change and complement the efforts made by so many excellent foundations globally" appears conveniently ambiguous.

All we know is that the "non profit" entity will not be called "royal" with details expected after March 31.

Whatever form their future takes, what is certain from this latest communique is that Harry and Meghan don't plan to go quietly.