Two moped raiders who terrorised shoppers as they smashed displays containing £1million of watches have been jailed for a total of 21 years.

Kyle Ettienne and Lookman Shekoni, both 27, targeted a Watchfinder store at the Brent Cross shopping centre in north-west London as part of a ‘military campaign’ of robbery.

Six men on three mopeds followed a double decker bus in through a security checkpoint and shoppers had to jump out of the way as they roared in, smashing fruit stalls out of their way. 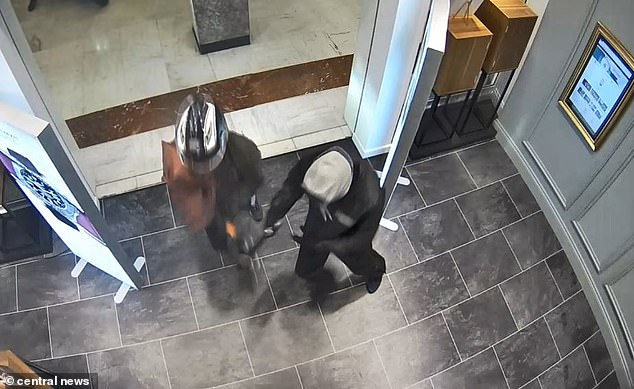 CCTV footage shows gang members using a hammer and a pickaxe to attack glass cabinets displaying Rolex, Cartier, and Philippe Patek watches, while the rest gang made ready their escape.

But the security alarm was activated by single female employee who was serving a customer before shards of glass started scattering across the shop.

The alarm activated a smoke screen and gang panicked and fled empty-handed from the raid on October 9 last year.

One police officer was knocked to the ground and taken to hospital with a head injury as he collided with one of the fleeing offenders.

A woman was also injured as she hurled herself to the ground to avoid their speeding bikes.

Shekoni was part of a gang of moped robbers behind an almost identical £400,000 raid at The Jewellery Gallery shop in Kingsbury, northwest London, in September 2015. 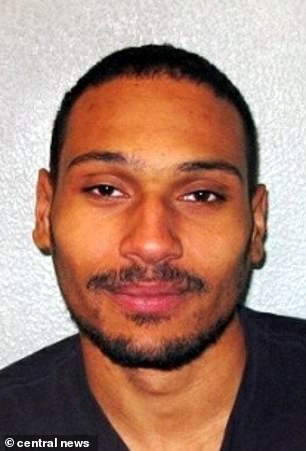 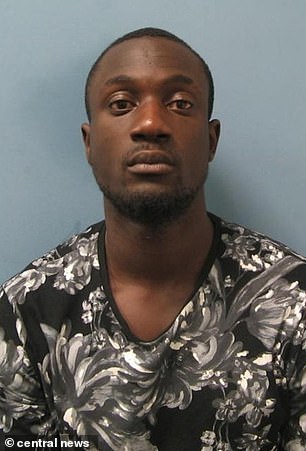 Passing sentence, Judge Ian Bourne said: ‘They are career criminals who have been released from prison months before this offence and they knew full well what they were doing.

He told the pair: ‘The two of you with the others were part of a military campaign and an extremely sophisticated, professional criminal enterprise targeting the store in question.

‘You intended to steal from that shop as much expensive jewellery and watches as you could obtain during the short time you intended to say in these premises.

‘Armed with a hammer and pickaxe you immediately started to smash at the glass display cabinets inside the shop.’ 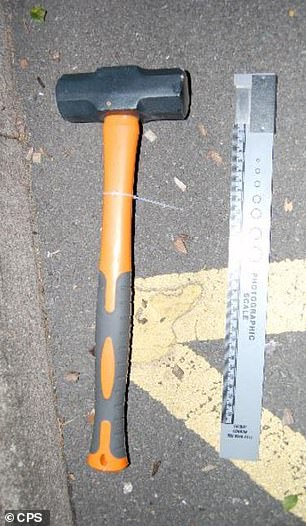 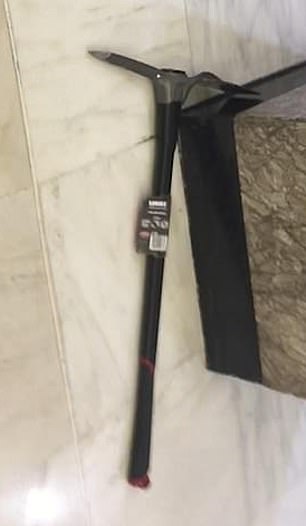 The judge continued: ‘The total value of the watches on display has been estimated at £1 million. A single female member of staff was working behind the counter serving a customer at the time.

‘She activated the security alarm which ejected fumes into the shop. Within moments police were on the scene.

‘You ran desperately trying to get away. As you did, Mr Shekoni, you threw your hammer away and were trapped by officers in a canal.

‘The other four offenders managed to get away and are still at large. It is clear from the female member of staff that she was terrified and feared for her safety.’

Both men have convictions for robbery and burglary and since the age of 16 have spent more time in prison than out.

It emerged during the hearing that both were released on licence in June this year following robbery and burglary convictions but within months were re-arrested.

Ettienne wrote to the court expressing his remorse for his actions saying he realised he was ‘throwing his life away’. 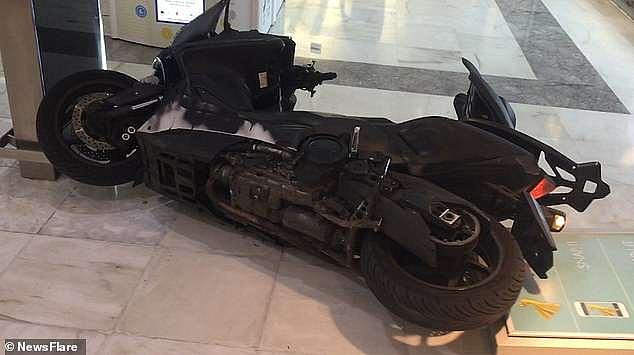 The father of a seven-month-old boy and a five-year-old girl hung his head in the dock as his partner wept in the public gallery.

His barrister James Hay said: ‘This was the biggest mistake of his life. He recognises in that letter that he needs to grow up.

‘Since he was 15 years of age he has spent the greater period of that time in custody.

‘There was a lot going on in Mr Ettienne’s life. It is right to say he had been released in the early summer.’

Ettienne was released from prison on 15 June this year while Shekoni was out on 26 June. 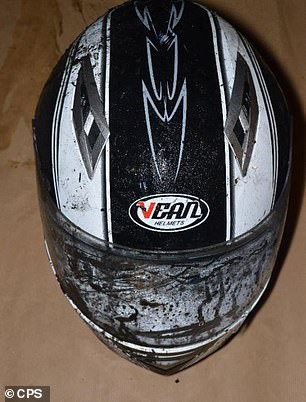 A helmet recovered from the scene. One police officer was knocked to the ground and taken to hospital with a head injury as he collided with one of the fleeing offenders

Their weapons were later recovered by officers and their DNA was found on a sledgehammer and a lock knife.

In the September 2015 raid the robbers smashed their way inside the shop with a large metal ram and used hammers and axes to threaten staff members.

Shekoni was given five and a half years for his part in the heist.

Ettienne, of Golders Green, Barnet, admitted attempted robbery and was caged for 10 and a half years.

He received four months for possession of a lock knife, but this will be served concurrently.

Shekoni, of Streatham, admitted attempted robbery and was also jailed for 10 and a half years.

Both men will be released on licence again after half of their sentence has been served.

Police are still hunting the other four raiders.

Julian Becker, from the CPS, said: ‘Shekoni and Ettienne were part of a gang armed with weapons that menacingly stormed a busy shopping centre on mopeds, leaving shoppers unsafe and terrified.

‘The evidence against Shekoni and Ettienne included DNA recovered from a sledgehammer and a lock knife.

‘There were witness statements from police officers who pursued them and CCTV footage from multiple cameras, which together provided continuity of view from the scene of the offence to their arrest.

‘The evidence demonstrated the role played by each defendant despite face coverings they thought would conceal their identities in committing this crime.’