A HALF-NAKED protester was jailed for fifteen days for posing as Jesus Christ and tying himself to a cross outside Russia’s FSB headquarters.

Pavel Krisevich, 20, wore a "bloody loincloth and sneakers", as a fire was started beneath a huge cross on Lubyanka Square in Moscow. 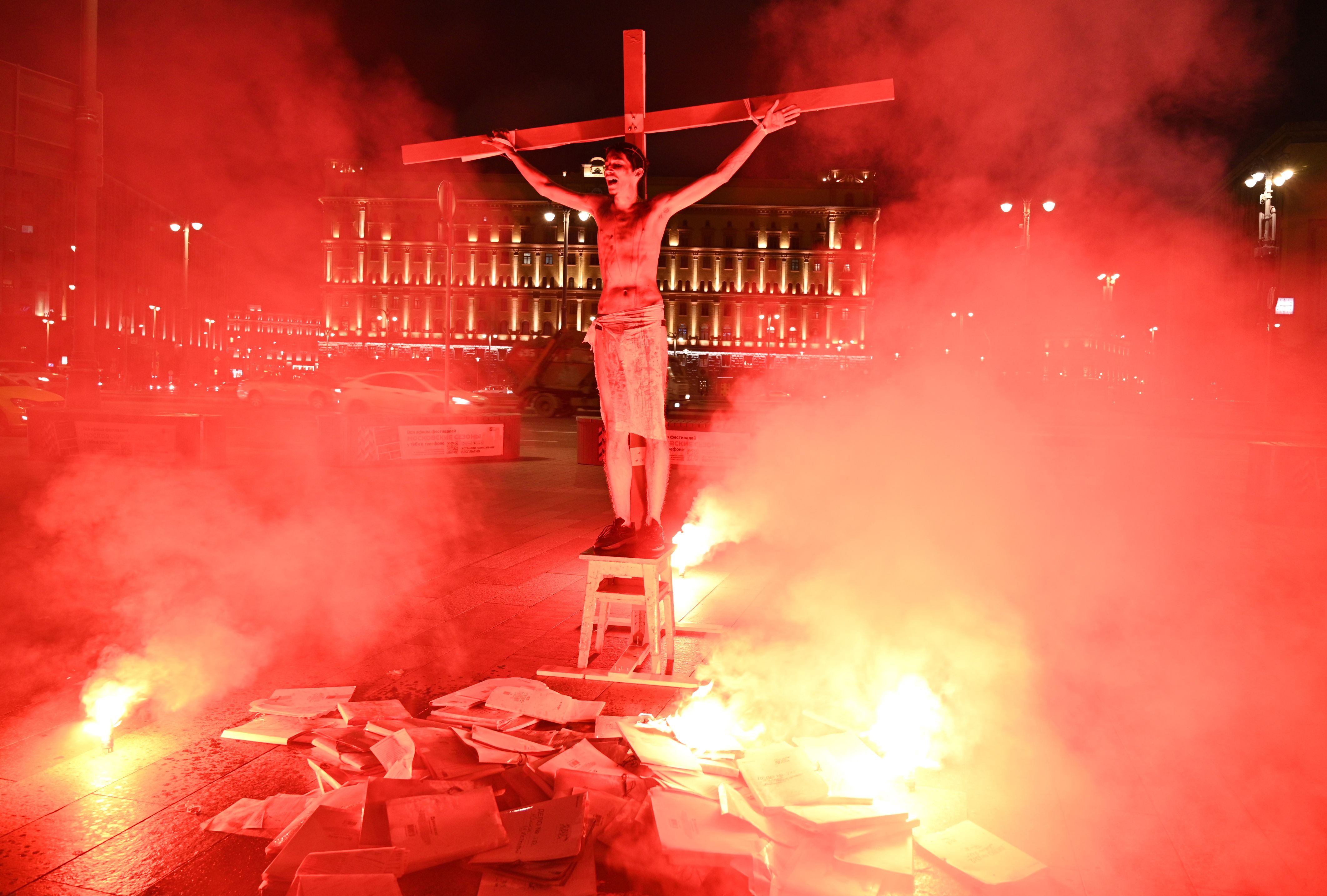 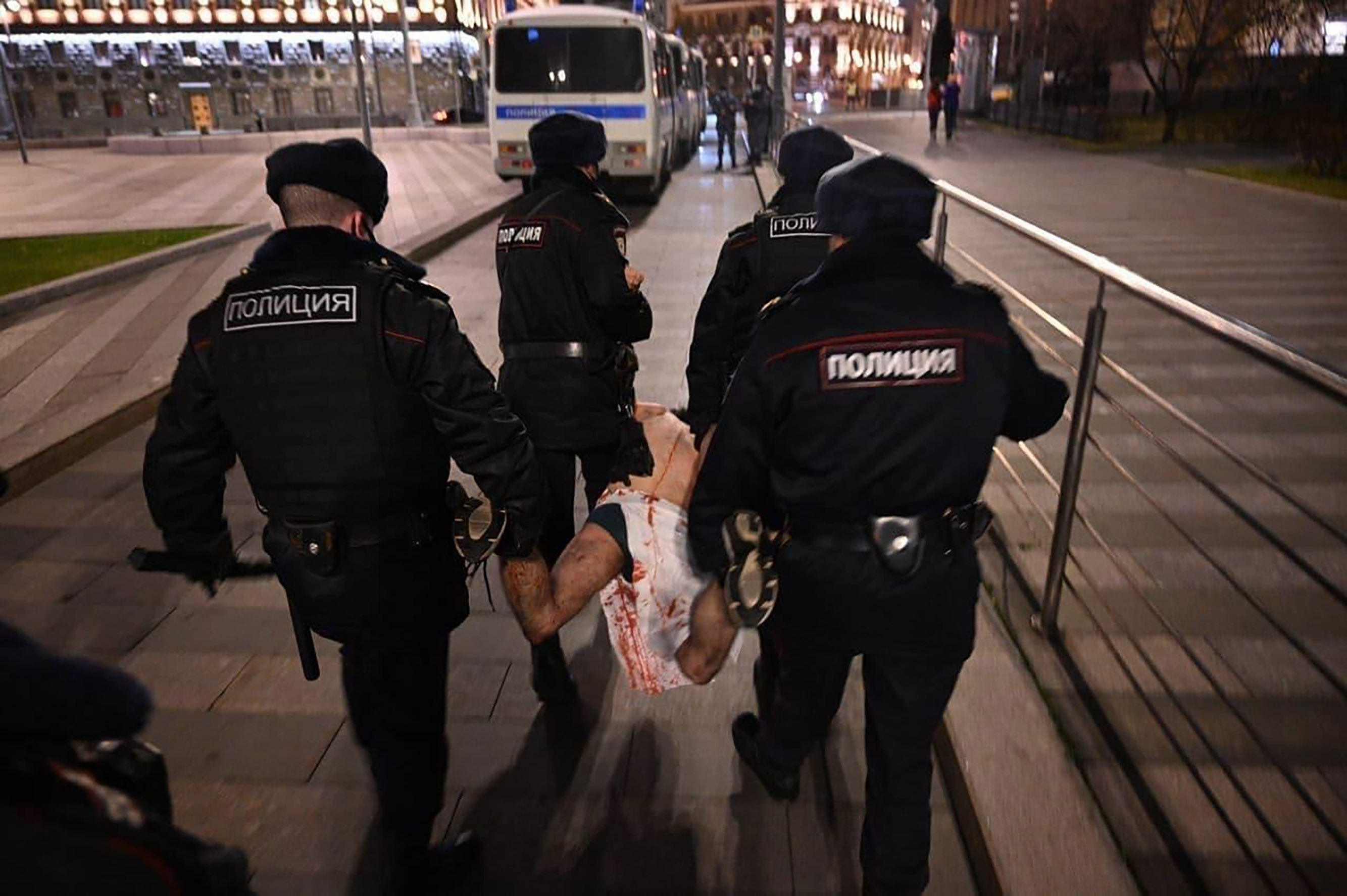 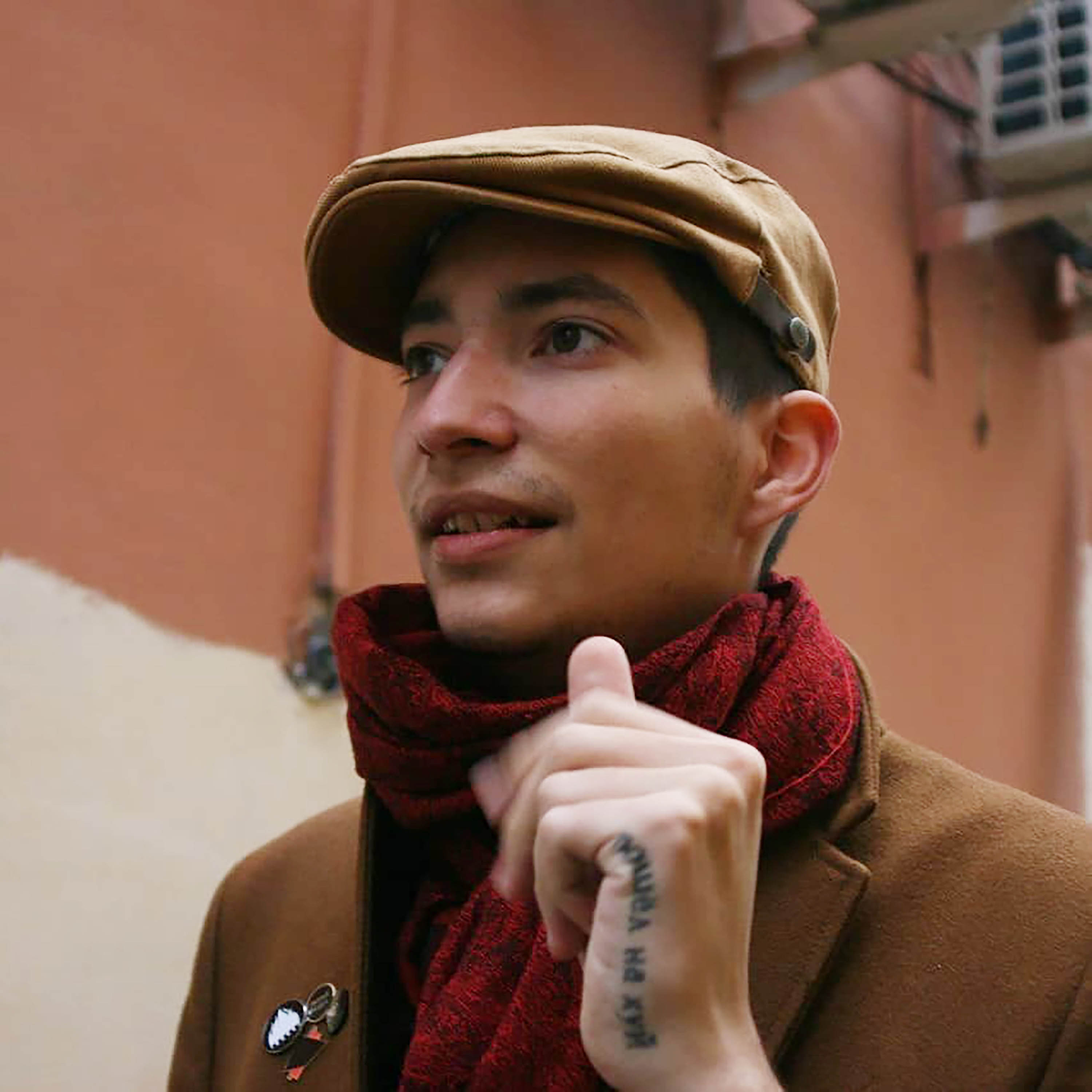 A Russian court on Friday jailed the activist for fifteen days for the stunt, which reportedly involved the burning of volumes of legal cases against alleged political prisoners in the country.

In a clip shared online, fellow activists are seen lighting a fire on the pavement in front of Krisevich before burning what they claim are the criminal case materials.

Explaining the performance, the activist’s lawyer Sergei Telnov told AFP that the “number of political prisoners is growing every year in Russia”.

Mr Telnov also denied that the activist had resisted officers, adding: “Pavel was detained at Lubyanka near the FSB building, while posing as Christ.

“I don't know yet which police station he has been taken to.”

A law enforcement source said: "A young man wearing a bloody loincloth and sneakers started a fire, climbed a stool behind it and tied a big cross to his hands to enact crucifixion.

“The man was detained.”

The activist – unhurt in the stunt – is known for stunts in support of “political prisoners” in Russia and neighbouring Belarus.

Later reports said he was being held at nearby Kitai Gorod police station, and is expected to serve up to 30 days detention for the protest.

Pro-democracy group Open Russia claims that the number of political prisoners in the country has grown sixfold since 2015.

The headquarters of Vladimir Putin's FSB counterintelligence service are in a former tsarist-era insurance company building.

It has long been associated with the repressive KGB in the Soviet era, where it was used for interrogations and extra-judicial killings. 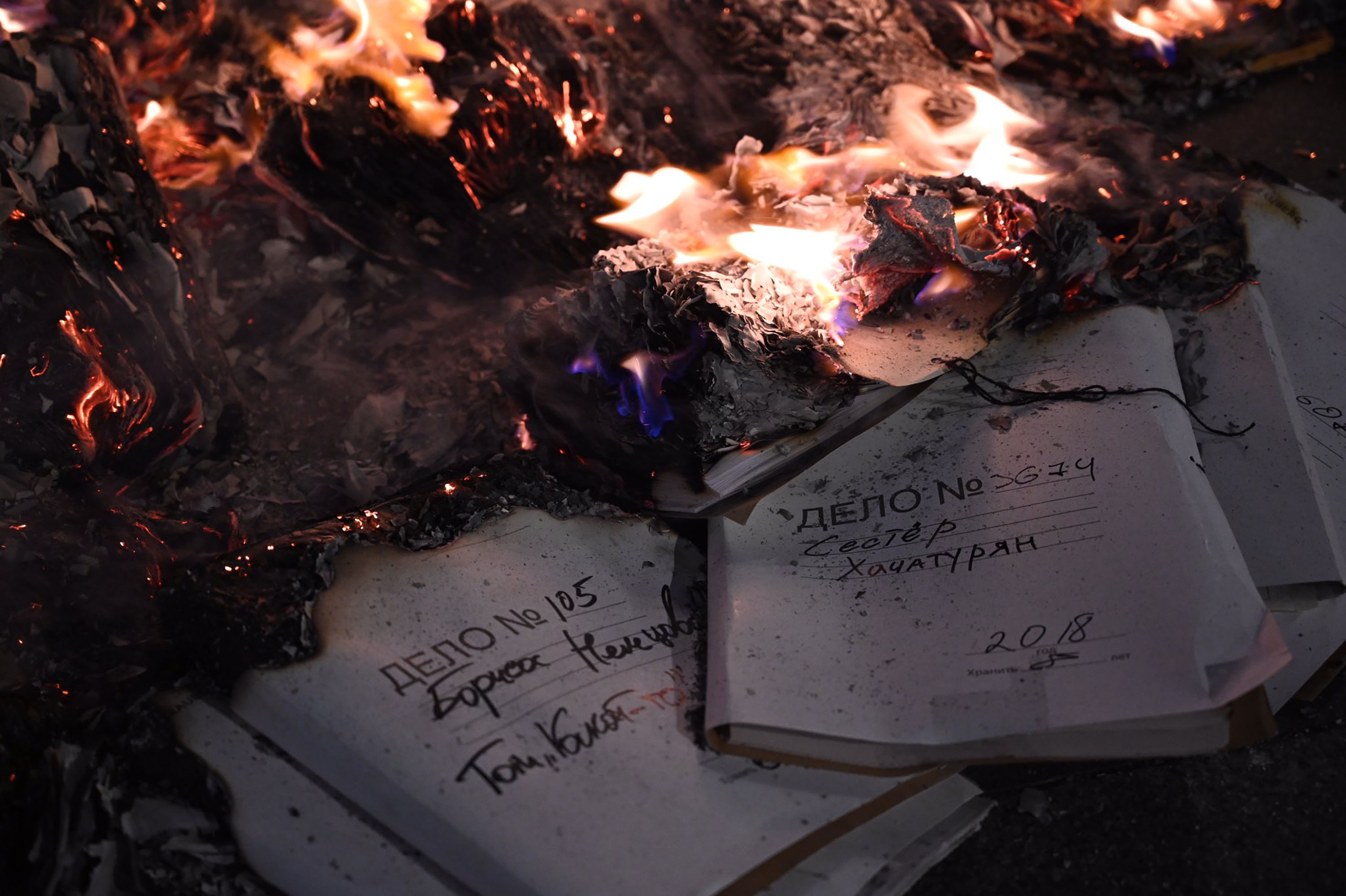 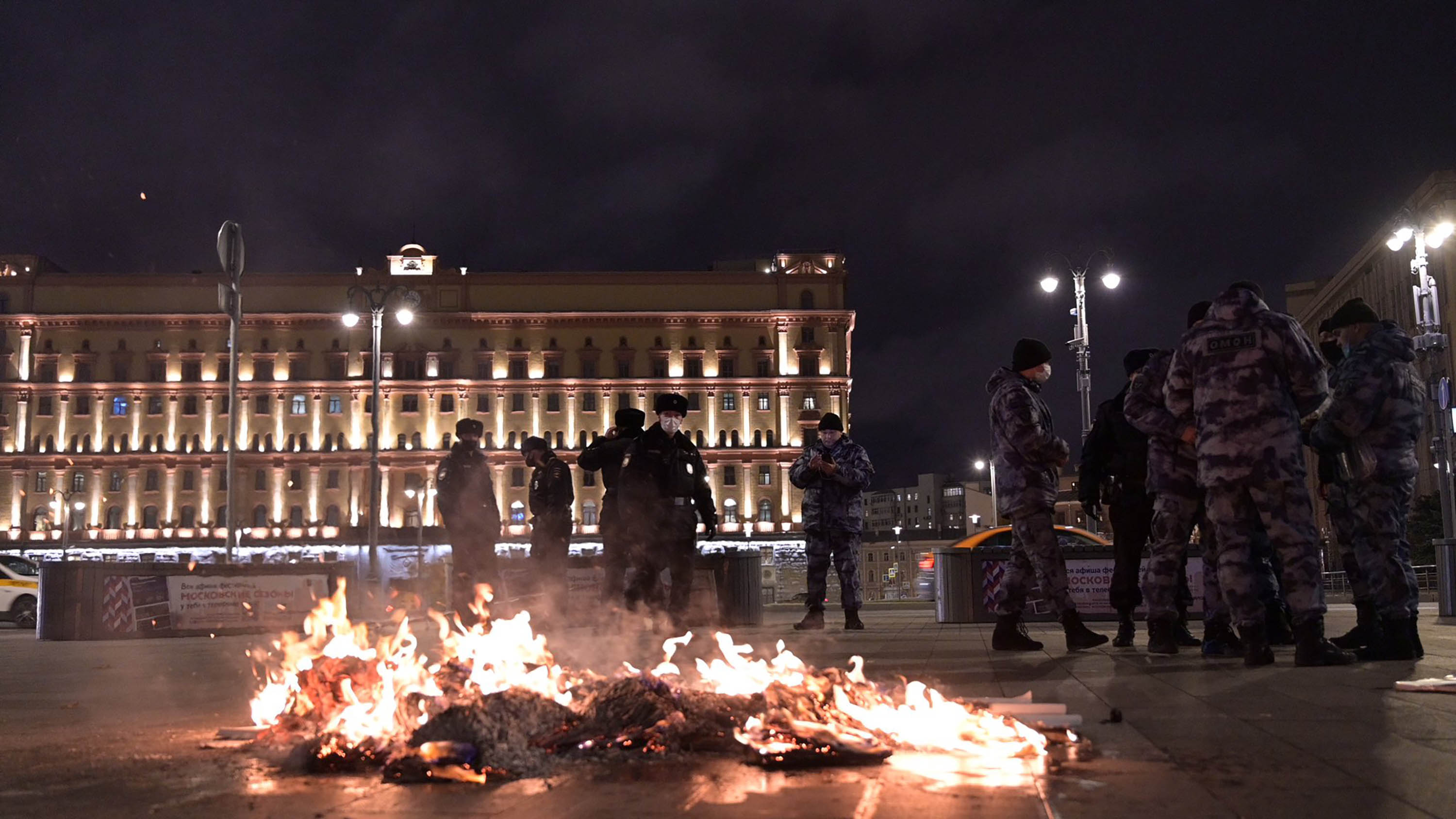