Gulls are as smart as parrots when they are foraging for food, study suggests

Gulls could be as smart as parrots when it comes to getting a hold of food, a study has found.

Renowned for snatching chips from unwary visitors to the seaside, the birds possess the skills to solve problems in order to earn a treat, according to researchers at the University of Newfoundland in Canada.

They analysed wild ring-billed gulls, pictured – which can sometimes be found in Britain – to see if they could ‘work out’ that pulling on a string would draw a small piece of sausage out of a clear box.

A quarter solved the test within three attempts, while one in five got it the first time. 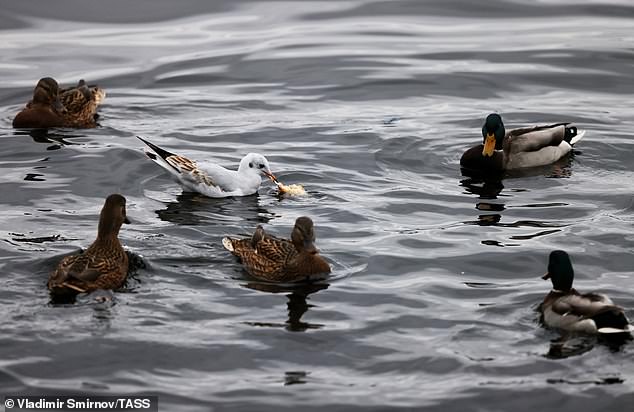 Picture: A seagull amid ducks in water. Gulls could be as smart as parrots when it comes to getting a hold of food, a study has found

Jessika Lamarre, author of the report published in the Royal Society journal, said it’s the first example of a waterbird solving the string-pull test.

Most species to complete the task are perching birds or parrots, which are renowned for their intelligence.

Ms Lamarre said: ‘String-pulling is among the most widespread cognitive tasks used to test problem-solving skills in mammals and birds.

‘The task requires animals to comprehend that pulling on a non-valuable string moves an otherwise inaccessible food reward to within their reach.

‘Ring-billed gulls are thus the first waterbirds shown to be capable of solving a horizontal configuration of the string-pull test using a single-baited string.

‘This finding indicates that gulls, and possibly other waterbirds, are well-suited to engage in cognitive tasks and are thus candidates for more advanced puzzles.’

Cognition has seldom been studied in gulls and other waterbirds, despite at least 17 species being known to use bait to attract prey and use tools to preen themselves.

The ring-billed gull is primarily found in Canada and North America but was first recorded in Britain in the 1970s.

Only a few dozen individuals are spotted each year, and are drastically outnumbered by the likes of the Common gull and Herring gull.