Grenfell fraudster who pocketed almost £87,000 and was put up in a hotel after claiming to be a survivor of the fire is jailed for more than six years 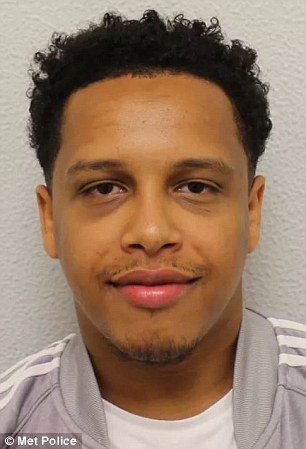 Yonatan Eyob (pictured), 26, received almost £87,000 in funds after falsely claiming he lived in Grenfell Tower in the wake of the fire

A drug dealer who received almost £87,000 in funds after falsely claiming he lived in Grenfell Tower in the wake of the fire has been jailed for more than six years.

Yonatan Eyob, 26, who was described as homeless but uses an address in Notting Hill, west London, was put up in a hotel and given a food allowance and pre-paid cards.

Drugs, including MDMA and cocaine, and seven mobile phones were found in his hotel room, along with around £3,000 in cash, designer clothes, jewellery and credit cards.

Eyob, who claimed he had been lodging with a friend in Flat 182 – home to a family of five who died in the blaze – pleaded guilty to fraud by false representation in June.

The judge described the fire as ‘a disaster which shocked the nation’, and said Eyob was treated as a ‘bereaved survivor and given top priority’.

He said: ‘You were profiting from the deaths of those people and the fact that they were in effect silenced.’

The judge said Eyob had decided to ‘enrich’ himself by ‘plundering the funds that were put aside for the victims’, adding: ‘It was a claim false and dishonest from the start.’

The Crown Prosecution Service said it is the largest known convicted Grenfell fraud so far.

He was given emergency accommodation at the Holland Park Hilton between July 2017 and June 2018.

The court heard he had the use of a white convertible Mercedes and had asked for more money, claiming that he was finding it difficult to eat the food at the hotel.

Prosecutor Catherine Farrelly also said that Eyob had complained about the WiFi signal in the hotel.

She said: ‘He was treated by the borough as a bereaved survivor and therefore given top priority. As a result of that then he was provided with hotel accommodation from June 2017 to June 2018.

‘In addition to that he was provided with food and a travel card for zones one to two. He complained he was finding it difficult to eat the food at the hotel.

‘He also complained about the wi-fi saying he was finding it hard to study.’

Eyob was charged with dishonestly making a false representation for accommodation and subsistence between June 2017 and June 2018. 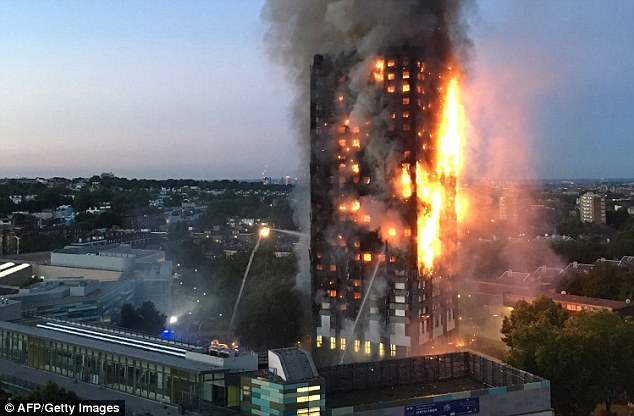 Eyob claimed he had been lodging with a friend in Flat 182, home to a family of five who died in the blaze. Pictured: the Grenfell Tower blaze on the morning of June 14 last year

The court heard there was a piece of paper with a list of names and numbers in the hotel room, and there were text messages found which related to drug dealing.

Hannan Wahabi, the sister of Abdulaziz El-Wahabi who lived in the flat, said what Eyob did was ‘a stain on all those who died in the terrible incident’.

Reading a victim impact statement, she said the fraud was ‘another unwelcome extra heartache and stress to deal with’, adding: ‘The actions of this individual have caused me sleepless nights.’

Ms Wahabi said the fact that someone had taken advantage of the distress felt by those left behind for their own personal gain ‘really hurts’.

A rich portrait was painted of the El-Wahabi family, who died at each other’s side in the tower, at the public inquiry into the fire.

Catherine Gould, from the CPS, said: ‘Yonatan Eyob took advantage of a terrible tragedy for his own greed.

‘He carried on his fraud for nearly a year, diverting funds from those who genuinely needed it and betraying the trust of everyone who gave him assistance.

‘If his deceit had not been discovered he would have been eligible for a council home with free rent and council tax until July 2019.

‘When someone lies in this way it is only right they are held to account.’

Who else has been convicted over Grenfell Tower frauds?

As of August 2018, eleven people have been charged with fraud offences relating to Grenfell, with five people put behind bars.

Anh Nhu Nguyen pretended his wife and 12-year-old son were killed in the blaze so he could claim charity handouts.

He pocketed £11,270 as he was put up in hotels and given clothing, laptops and cash.

But police discovered the 53-year-old had 28 convictions for 56 offences spanning more than 30 years, including theft, dishonesty offences, arson and grievous bodily harm.

Nguyen, who was born in Vietnam, even tried to apply for a passport by claiming his had been incinerated. He was jailed for 21 months in February. Another fraudster, Anh Nhu Nguyen, met Prince Charles during his time posing as a victim

Elaine Douglas and Tommy Brooks falsely claimed they lived in Grenfell Tower to claim more than £120,000.

They also spent more than £20,000 on meals and clothing on pre-paid credit cards which were given to them by Kensington and Chelsea council.

The pair entered Britain illegally from Jamaica 16 years ago on separate flights and were ordered to leave by immigration officials only to vanish – reappearing in the aftermath of the Grenfell tragedy last year.

Joyce Msokeri falsely claimed to have lost her husband in the blaze so that she could claim thousands of pounds.

The conwoman travelled 14 miles from her own flat to the tower block and convinced charity workers she had survived the inferno.

She feigned trauma to obtain handouts of £19,000 in cash, food, clothing, three mobile phones and free stays at a Hilton hotel. The 47-year-old would have received £203,000 in handouts if she had not been caught.

When Msokeri, from Zimbabwe, kept giving them different numbers for her flat in the tower block, her apparent forgetfulness was put down to trauma. She was jailed for four-and-a-half years in April. 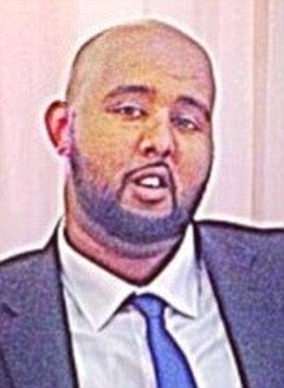 Mohammad Gamoota trawled a list of the dead then told officials his father was Abdeslam Sebbar, who had died after becoming trapped in his flat.

The 31-year-old said he had survived only because he was attending midnight prayers at his mosque when the inferno took hold.

In reality, he was not related to Mr Sebbar, 77, and did not live in Grenfell Tower, but took the details from a newspaper.

Two days later, Gamoota presented himself as a bereaved relative. He was given £500 and booked into a Holiday Inn hotel where he racked up a £374 room service bill.

He tried to claim a further £5,000 – but a technical issue with his bank account prevented the money being paid in. He was jailed for 18 months last week.

Eyob claimed he had lived alone in a flat that actually contained a family of five who perished in Britain’s worst fire for a generation.

Neighbours said he didn’t and CCTV proved he had never been there.

He was later charged with dishonestly making a false representation for accommodation and subsistence between June 2017 and June 2018.

The 26-year-old pleaded guilty and was jailed for more than six years.

Jenny McDonagh stole pre-paid cash cards while working as manager of the Grenfell Fire fund at the Royal Borough of Kensington and Chelsea.

In total she took about £62,000 from pre-paid cash cards meant for several survivors, including Fadumo Ahmed, Sacha Salaabi and Christos Fairbairn, the court heard.

The money was spent on online gambling and foreign holidays.

The fraudster claimed to be the flatmate of 80-year-old Hermine Harris who was living in the block of flats on the night of the tragedy which left 72 people dead in June 2017.

He has been jailed for three years.