Former Australian of the Year and sexual assault survivor Grace Tame says she told police multiple times about threatening messages on social media that she alleges came from her childhood abuser, but that “no changes have come about” since she reported the messages.

Twitter has permanently frozen the account with the handle ‘Nico Bester’ – an account Tame believes belonged to the teacher who sexually abused her when she was 15 years old – after a series of messages that broke the platform’s rules about “violent threats”. 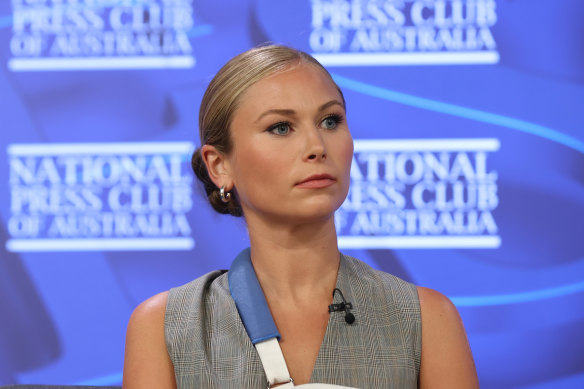 Tame published a lengthy post on Twitter on Monday night in which she said the teacher who sexually abused her has since targeted her online with “open threats and harassment”.

Australian Federal Police and Tasmania Police have been contacted for comment.

On Tuesday, Tame told ABC Radio Melbourne that she believed her abuser was also targeting her charity, The Grace Tame Foundation, using aliases with sexual abuse innuendos and references that only she and her partner, Max Heerey, would know about.

“I’ve been to the police a number of times about these things and no changes have come about,” Tame said.

Tame was a student in Hobart when she was sexually abused by her 58-year-old teacher Nicolaas Bester in 2010. He was later sentenced to two years and 10 months behind bars for the abuse of Tame, who was 15 at the time, and served one year and eight months in prison.

Tame shared screenshots on Monday which showed an account with the handle ‘Nico Bester’ make multiple posts which the Tasmanian sexual assault survivor said used her childhood email to threaten her.

“The thing is that it’s really disheartening and disillusioning when you feel like you are banging your head against a wall when you’re trying to draw attention to a menacing predator,” Tame said.

Tame tweeted that she had made her second official report to Tasmania Police on Monday.

“[The police are] saying that they are doing things. The communication hasn’t been great. It hasn’t been reassuring,” Tame said on ABC Radio.

“I don’t have an eye into what they’re doing. I can’t see what the action is they are taking.”