Everyone had a view on George Pell. Friends, colleagues, acquaintances: no one could ever be entirely indifferent to the most powerful Australian to have risen through the ranks of the Roman Catholic Church.

Pell’s story was a compelling one. An Aussie lad done good, he overcame 24 operations on his throat as a child to become a heavyweight boxing champion and a ruckman for his college first XVIII. And in 1959 he signed with Richmond – so it was a great surprise to many when his ambitions veered off towards becoming a Catholic priest. 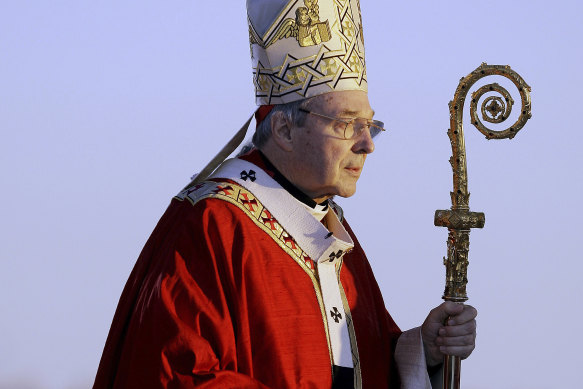 The pugilist: Cardinal George Pell walks onto the stage for the opening mass for World Youth Day in Sydney in 2008. Credit:AP/Rick Rycroft

Pell’s formidable political and administrative skills soon made his church superiors take notice. After a doctorate at Oxford and a stint as seminary rector in Melbourne, he became archbishop of Melbourne then of Sydney. In 2003 he was created a cardinal and was instrumental in bringing Pope Benedict XVI to Australia for the 2008 World Youth Day.

But Pell the prelate was often accused of practising church politics like a pugilist, or as if the church were just an extension of the footy field. Those who questioned him were dismissed; those who resisted him were brusquely swept aside.

For 30 years as archbishop and archbishop emeritus, he became Australia’s voice of Catholic conservatism: an unstinting advocate for conservative politics, traditional morality and the old ways of doing things. He was a sceptic about climate change and about the European Union. He was a fan of monarchy and Brexit.

In contrast to Pope Benedict’s softly spoken “professor” profile, Pell’s public image was that of the outspoken bruiser whose opinions came forth not sotto voce but like a well-honed trumpet blast. Though charming in private, by his own admission he could display quite a temper if he didn’t get his way.

Pell’s hard-line moral and theological positions infuriated liberals inside and outside the Catholic Church, yet he didn’t seem to care. He had the courage of his convictions and the articulacy to make them widely known.

Pell’s now-notorious 2019 conviction on several counts of offences against children inside Melbourne’s cathedral complex therefore presented almost too delicious an irony for his many enemies. He had already faced considerable criticism for his role in the handling of child sexual abuse in Victoria. The lengths to which he supported fellow priest and convicted paedophile Gerald Ridsdale were regarded at best as unwise.

Plenty of Australians wanted to believe Pell guilty. They had little sympathy for the man or his message. Many, even those who harboured doubts, ought probably admit to themselves that they felt a sense of schadenfreude. Were not his trials and tribulations just deserts for his leading role in the Australian church’s collective failure to act against abuser priests?

Yet Pell’s conviction really was too good to be true for his enemies. The High Court’s 7-0 judgment in 2020, upholding Pell’s appeal against his conviction, raised grave doubts about the efficacy, competence and impartiality of Victoria’s criminal justice system. Pell’s disgrace therefore became, in many ways, our disgrace. The great prelate was humbled but also traduced.

Pell retired to Rome where he raised his head above the parapet only occasionally. In 2021, he demanded that German bishops be censured for teaching that homosexuality might be permissible and reiterated his own uncompromising views.

He also published his prison journals, three remarkable volumes which underscore both his extraordinary talents and his lack of empathy for abuse victims, his orderly and methodological mind and the reason why he lost the Australian public.

“Naturally, I feel uneasy and embarrassed being compared to the Lord; or even to Thomas More or John the Baptist,” he wrote at one point – before going on to compare, just pages later, the prospect that he might spend another three years in prison to the Passion of Jesus.

The journals include a few statements which acknowledge the extent of abuse and its tragic effects on victims. Yet they also include these: “if anyone in the mid-nineties knew the extent of the problem, they did not say so publicly, or to me privately”; “One senior retired politician explained to me that the royal commission … demonstrated that the problem was not unique to Catholics …“; “Unfortunately, the royal commission became more anti-Catholic as it progressed and the televising of the hearings produced something like the Soviet Union show trials.”

It is not hard to see why Pell’s shadow has remained over Australia and why even in death he is likely to remain among our society’s most polarising figures. The royal commission was able to release its findings on Pell after his conviction was quashed. His abrasive response to its extensive criticism was characteristic: “not supported by evidence”.

Dr Miles Pattenden is senior research fellow at the Institute for Religion and Critical Inquiry at Australian Catholic University.

The Opinion newsletter is a weekly wrap of views that will challenge, champion and inform your own. Sign up here.