Germany ‘won’t be able to avoid’ a new lockdown when second wave hits, virologist warns as outbreaks spread around the country

Germany will not be able to avoid a second lockdown if it is hit by a second wave of coronavirus cases, a leading virologist has warned.

Jonas Schmidt-Chanasit said ‘drastic measures’ would be back on the table if Germany’s health system is overwhelmed by virus cases – a nightmare scenario which Germany has so far avoided.

Fears of a second wave are mounting in Germany after an increase of 4,127 new cases in the last week, up from 2,385 two weeks ago.

Experts are worried because the virus is spreading across the country and is not confined to a handful of local clusters, with the R rate now regularly above 1.0. 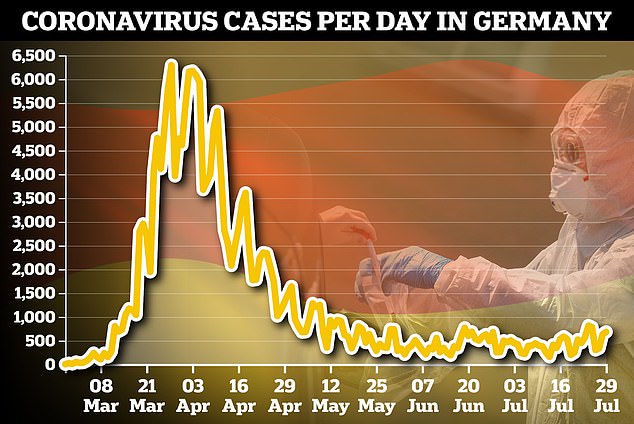 Germany has suffered four daily jumps of 600 or more coronavirus cases in the last six days, after previously seeing none since the end of June 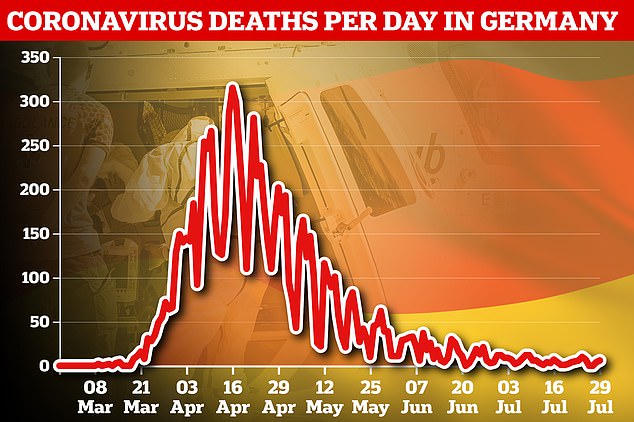 Germany’s death toll remains low, with daily fatalities only rising into double figures once in the last three weeks

Schmidt-Chanasit, a virologist at the University of Hamburg, told ARD last night that ‘the situation is still manageable’, but warned that it could ‘very quickly get out of control’.

Asked about a possible second lockdown, he said: ‘In the worst case, if we really get a second wave – I define that as our health system being overwhelmed – then we won’t be able to get around very dramatic, very drastic measures. But that’s exactly what we want to avoid.’

Schmidt-Chanasit said there were ‘many individual herds’ of new cases, in contrast to last month’s spike which was mostly traceable to a few large clusters.

‘Now travellers are being added to the mix as well – there are many clusters which politicians but also scientists will have to to react to,’ he said.

The state premier of Baden-Wuerttemberg, which includes Stuttgart, has already warned of tougher punishments for people who break the coronavirus rules.

Germany recorded 684 new cases today, meaning that cases have risen by 600 or more for four of the last six days, having previously not done so since June.

Six new deaths today brought the total to 9,128 and the country’s fatality rate remains far lower than in Britain, Spain, Italy or France. 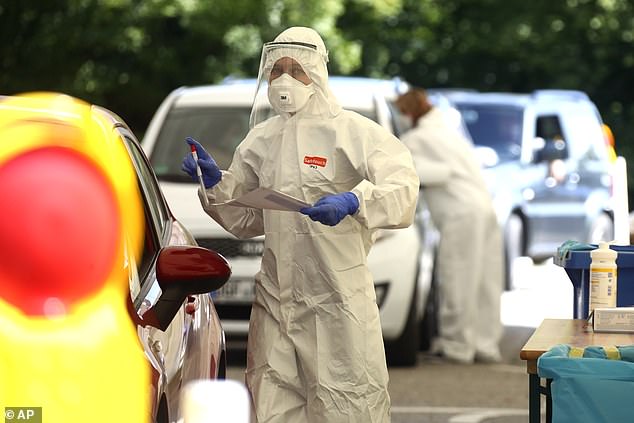 The Robert Koch diseases institute (RKI), which collects the figures, says the closely-watched R rate is currently at 1.25.

The figure means that every four people who catch the virus will typically infect another five – meaning the number of cases will increase over time.

Angela Merkel has previously warned that Germany’s health system could be overwhelmed if the rate is even slightly above 1.

In its daily report, the RKI said the rise in cases was ‘very concerning’ and linked to a range of activities including holidays, family reunions and leisure activities.

‘A further worsening of the situation must be avoided. This will only succeed if the entire population continues to be committed to decreasing transmission,’ it said.

Germany has generally been praised for its handling of the pandemic after moving quickly to roll out mass testing in the spring.

The country’s lockdown was never as strict as in Britain or Spain, but the latest increase has hampered efforts to resume normal life.

German tourists are now advised to avoid taking holidays in Catalonia, Aragon and Navarre in northern Spain, although not the southern coast or islands. 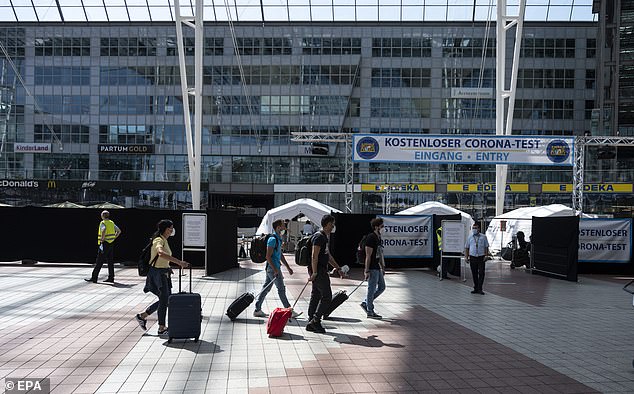 Airline passenger wait outside a coronavirus testing centre at Munich Airport on Tuesday, after Germany made the checks compulsory for people arriving from high-risk areas

Catalonia, where the virus has flared up, on July 18 advised four million residents in and around Barcelona to stay at home.

However, the regional government said it regretted Germany’s decision to advise against travelling there.

Britain has gone further by declaring all of Spain off-limits, while France and Norway have also imposed new restrictions.

Germany has also differed from Britain by ordering mandatory coronavirus tests at airports for people returning from high-risk areas.

Some airports had already started installing testing facilities and the checks will become mandatory from next week.

‘I will therefore order compulsory testing for travellers from risk areas,’ he announced on Monday.

After a meeting with state officials on Monday, Angela Merkel’s chief of staff Helge Braun said there was a ‘great willingness to move closer to such mandatory tests’.

‘From what we have experienced in the last few days, with over 800 cases a day in some cases, we must get back into a situation where we are well below 500,’ Braun said.