Berlin: Germany’s spy agency fears that Moscow was able to turn one of its agents in the months after the outbreak of war in Ukraine, it has emerged.

The agent, who worked for Germany’s foreign intelligence service, the BND, is believed to have had access to secret information about the Ukraine war from Britain’s GCHQ spy agency and the US’s National Security Agency. 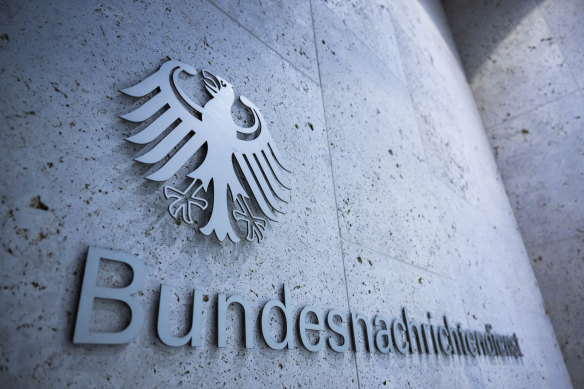 The secret service’s lettering is on one of the entrances to the headquarters of the Federal Intelligence Service (BND) in Berlin, Germany.Credit:AP

The alleged double agent, identified only as Carsten L in accordance with Germany privacy regulations, was arrested on suspicion of treason in Berlin last Wednesday, and remanded in custody after appearing before a judge.

Security sources are now investigating the possibility that the agent was blackmailed into betraying Germany, the German news programme Tageschau reported. If confirmed, the recruiting of an agent in the aftermath of the invasion in February would represent a coup for Russia and a blow to Western intelligence.

“The accused is suspected of state treason,” prosecutors said in a statement. “In 2022, he transmitted information that he had obtained in the course of his professional activities to Russian intelligence services.”

He may have been turned by the Russians through blackmail, German media reported on Monday.

The double agent passed on German intelligence assessments of the fighting in Ukraine to Moscow, news outlets reported.

Neither the BND nor federal prosecutors would comment on the claims, but previously said the investigation was ongoing.

The alleged double agent was a senior official in a surveillance unit of the BND, according to Focus Online news.

It said that one of his responsibilities was to analyse information obtained through wiretaps and he also had access to wiretap operations by other Western security services, including in the UK and US.

Wolfgang Kubicki, vice chairman of the FDP party and a member of the ruling coalition, said he was concerned that the scandal could affect ties between the BND and its counterparts overseas.

“If information could get to Russia from the BND, that will make cooperation with our partners even more difficult,” he told the financial daily Handelsblatt.

German authorities have warned for several years that Russia has stepped up its efforts to penetrate intelligence circles, and have conducted several investigations into Russian espionage since the war broke out on February 24.

“With Russia, we are dealing with an actor where we must reckon with its ruthlessness and willingness to be violent,” said Bruno Kahl, head of the BND intelligence agency.