CRIMINAL gangs are launching daring raids on moving lorries travelling up to 50mph to steal PS5s, mobile phones and cigarettes in the lead up to Christmas.

Crooks are mounting the bonnets of cars and climbing aboard trucks armed with crowbars or cutting gear to break into them and nick the expensive swag on roads across Britain. 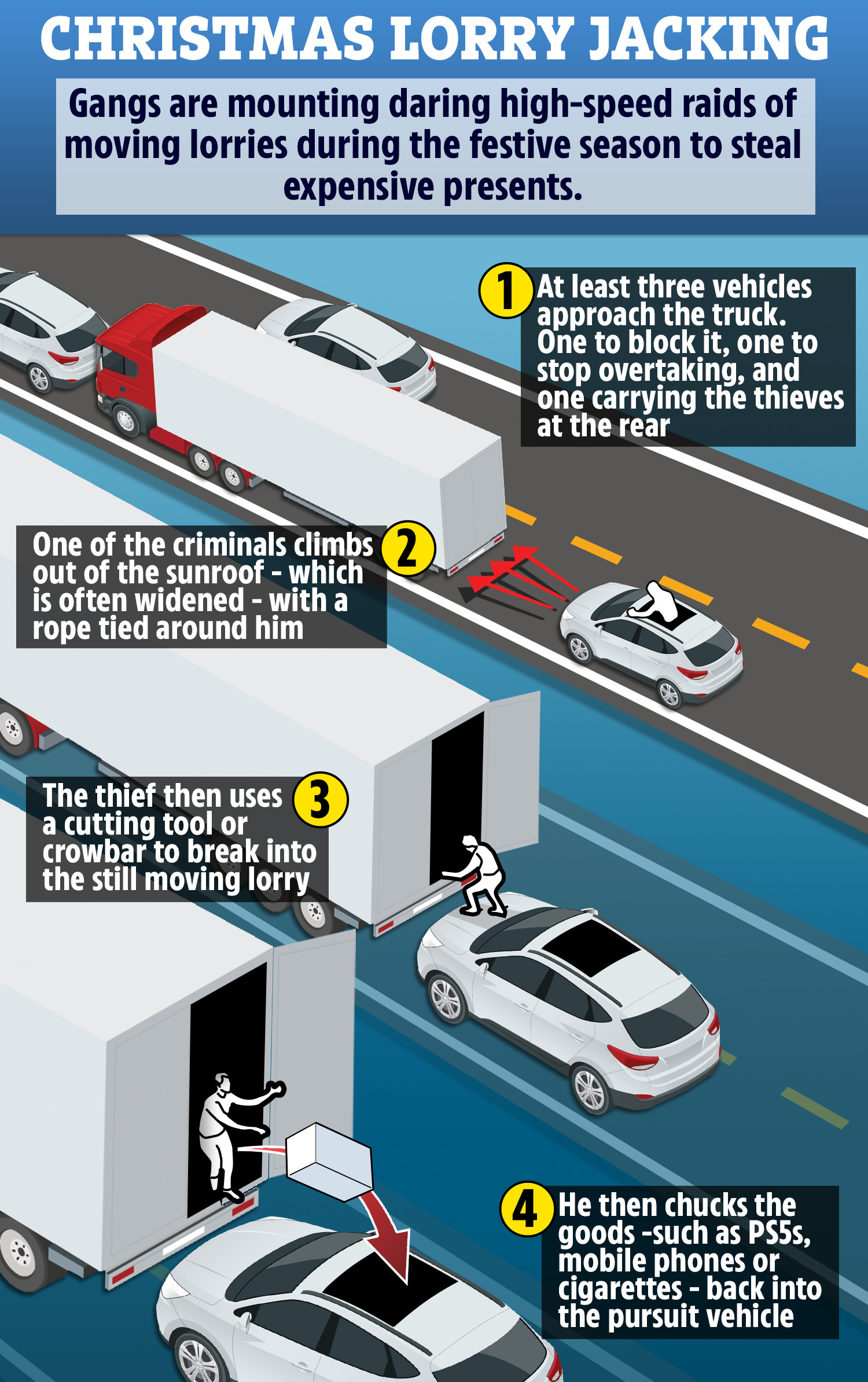 Cops have had reports of the stunt – dubbed "the rollover" – at least 27 times this year alone, reports The Times.

Detectives fear criminals are stepping up the tactic in the festive season as they snaffle pricey presents to sell on.

PlayStations, TVs, mobile phones, cigarettes and cosmetics have all reportedly been taken off the back of lorries in recent months.

Gangs execute the plan – which is like something out of the Fast and Furious movies or Grand Theft Auto video games – by boxing in a lorry using three vehicles.

One will position itself at the front of the truck, one alongside to prevent overtaking, and one will sit behind ready to launch the raid.

The most sure-footed of the thieves will them climb out the sunroof of the pursuing car and get onto the bonnet of the vehicle.

Usually secured by a rope, he will then use his tools to open up the back of truck before leaping aboard and throwing out the boxes of loot.

Police have reportedly issued alerts to haulage firms over the tactic and other freight crime as it appears to have stepped up in recent weeks.

The figure of 27 raids covers the year up to September.

And it is feared some of these raids could be inside jobs as the criminals are tipped off to which lorries are carrying the most expensive goods.

It also follows a wave of apparent thefts PlayStation 5s in transit as baffled customers ended up with cat food, loo rolls or household items instead of their consoles.

The National Vehicle Crime Intelligence Service (Navcis) has urged haulage bosses to bolster security and vary their routes to try and beat the crooks. 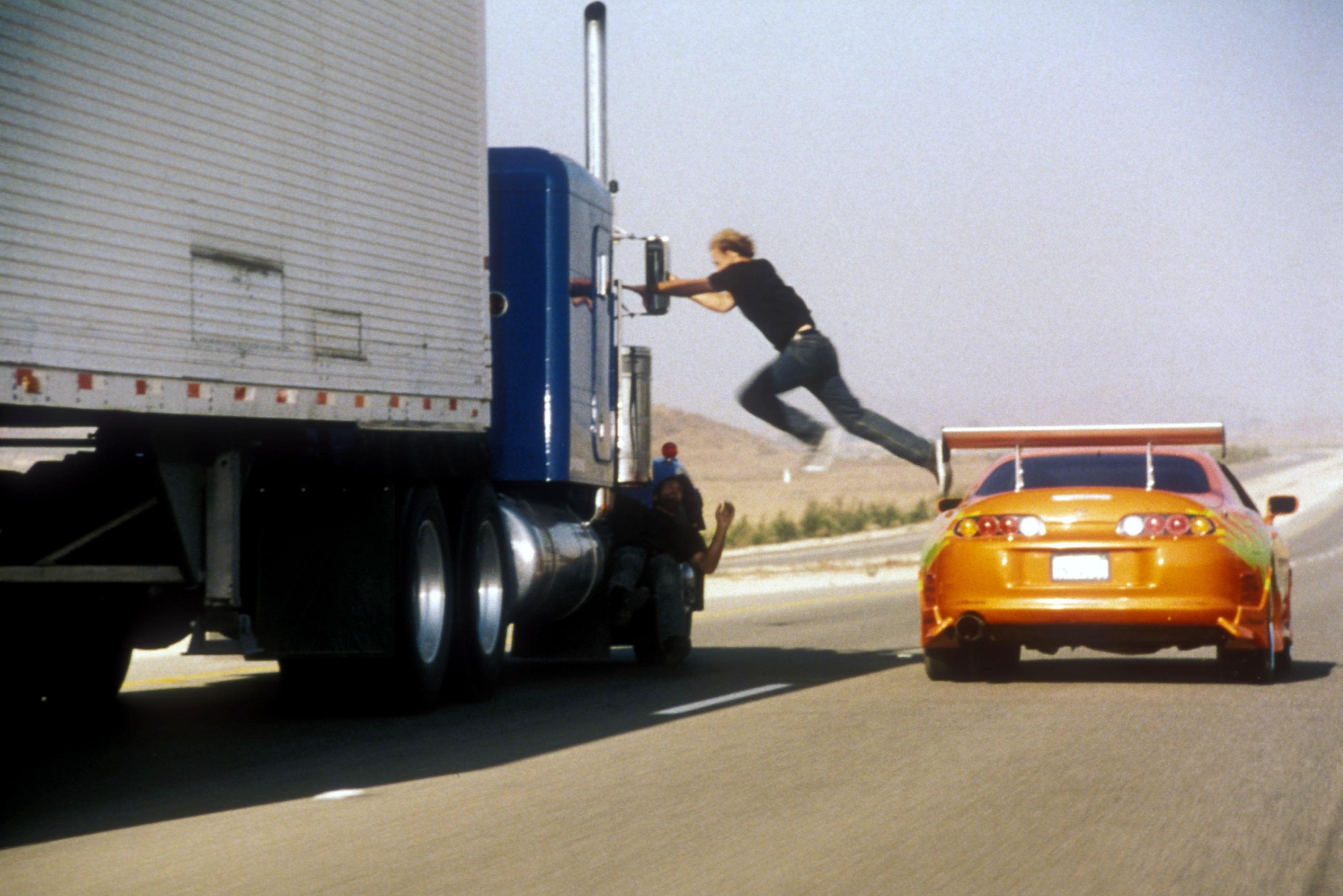 Navcis chiefs said it had received 3,055 notifications of cargo crime in the first nine months of 2020.

The gangs are estimated to have cost businesses about £66million.

The Times reports one career criminal said thieves were increasingly focused on goods in transit because its considered a weak point for security in the supply chain.

Police confirmed a lorry travelling overnight between Leicestershire and Norfolk was attacked on September 25.

Thieves had entered the trailer during the journeyand stolen "high value parcels" – but the gang remains at large.

Video released by Romanian police back in 2012 shows the brazen tactic in action as the gang cruises up behind a lorry.

One of the thieves then climbs out of the sunroof and attempted to break open the truck's rear doors. 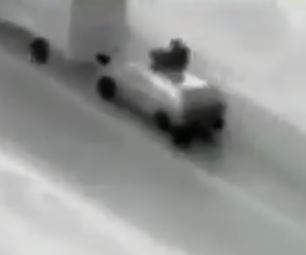 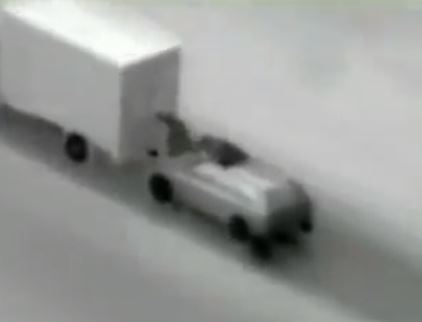 In other haulage crime,last month a lorry carrying £5million worth of Apple products was forced off the M1.

The criminals made off with the expensive products as they left the horrified driver tied up.

And in Milton Keynes in the same month a lorry driver was held at knifepoint as a gang broke into his vehicle near a John Lewis warehouse.

The same distribution centre was targeted just weeks before as well when crooks made off with 200 televisions worth £136,000.

Criminals hijacked a lorry and left the 59-year-old driver with a fractured eye socket before they dumped the truck.

Delivery vans are also at risk as well as more and more people shop online due to the coronavirus pandemic.

West Midlands police issued a warning over "looting" of courier trucks – saying they had reported ten cases in ten days in November.

A woman driver was hit with her own van by a thief who jumped in when she left the door unlocked.

Cops urged couriers to be extra vigilant as they start to drive large loads of Christmas presents to peoples' homes throughout December.

Chrys Rampley, a former security manager at the Road Haulage Association, the online shopping boom meant delivery drivers were being put at risk.

She said many couriers are hired as casual workers and have not received any security training – being left "more vulnerable" to crooks.

The expert also warned there is a risk gangs are being fed inside information about what vans and lorries to target.

"Somebody must know when and where that vehicle is and it can’t be just random that you are going to attack that. Somebody has done some tipping off," Ms Rampley said.