The SNP has been accused of being ‘out of touch’ after it set aside a £600,000 war chest for a second independence referendum.

Its national executive committee agreed at the weekend to earmark the fund to prepare for a referendum in the course of the current financial year.

But opponents say the party is taking its eye off the pandemic.

Scottish Conservative leader Douglas Ross said: ‘This clearly shows where the SNP’s priorities lie. As Scotland continues to fight the pandemic, they are focused on pressing ahead with plans for a reckless referendum potentially as early as this year.

‘Setting aside this vast sum of money to help preparations for another referendum shows their commitment to return Scotland to the politics of division all over again. 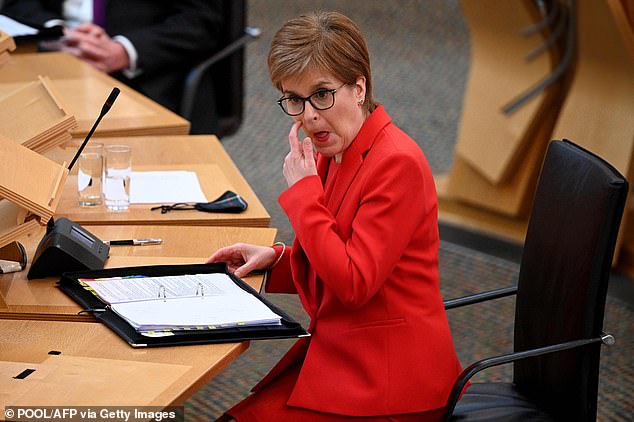 Nicola Sturgeon and the SNP are under fire after they earmarked a £600,000 war chest for a second independence referendum

‘We should be focused on continuing the success of the vaccine programme and fighting to protect people’s jobs and livelihoods. Instead Nicola Sturgeon and other senior SNP figures repeatedly refuse to rule out holding an illegal referendum in 2021.

‘Only a vote for the Scottish Conservatives in May can halt the SNP’s plans and have a parliament fully focused on building up Scotland, rather than trying to break it up.’

Pamela Nash, chief executive of Scotland in Union, said: ‘This shows the out-of-touch priorities of the SNP.

‘People are losing their lives and livelihoods, yet the Nationalists want to prioritise a second referendum on leaving the UK.

‘And despite spending hundreds of thousands of pounds on their negative vision for our country, SNP leaders still can’t answer the most basic questions – such as what currency a separate Scotland would use. Rather than obsess about how to divide people, we need politicians determined to bring people together.’

An SNP spokesman said: ‘Douglas Ross is a shameless hypocrite. We’ll get on with the day job of leading Scotland’s recovery while they blow millions of public cash on pro-Union propaganda.

‘The issue at the election in May will be this: who has the right to decide what sort of country we should be after the pandemic – the people of Scotland or Boris Johnson?’

It comes just days after a leading Nationalist MP said the independence movement must split from the SNP to break its dominance.

Kenny MacAskill, a former justice secretary and an ally of Alex Salmond, said that many potential ‘Yes’ voters ‘are neither in a party nor want to be’.

Pro-independence parties have sprung up before May’s Holyrood election while alternative policy groups, including the recently launched Now Scotland, have set out to challenge Nicola Sturgeon’s strategy for another referendum and her prospectus for an independent Scotland.