THOUSANDS of National Guard heroes were reportedly forced to sleep in a garage after protecting the Capitol for President Joe Biden's inauguration.

Fury erupted after pictures went viral on social media showing thousands of troops sleeping on the floor of a garage or up against a pillar. 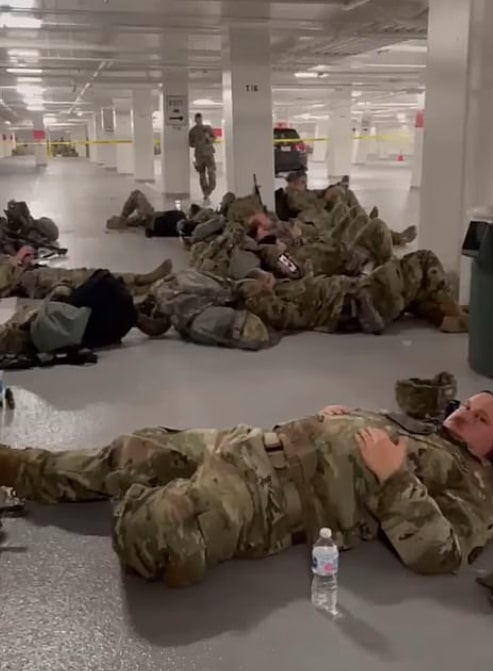 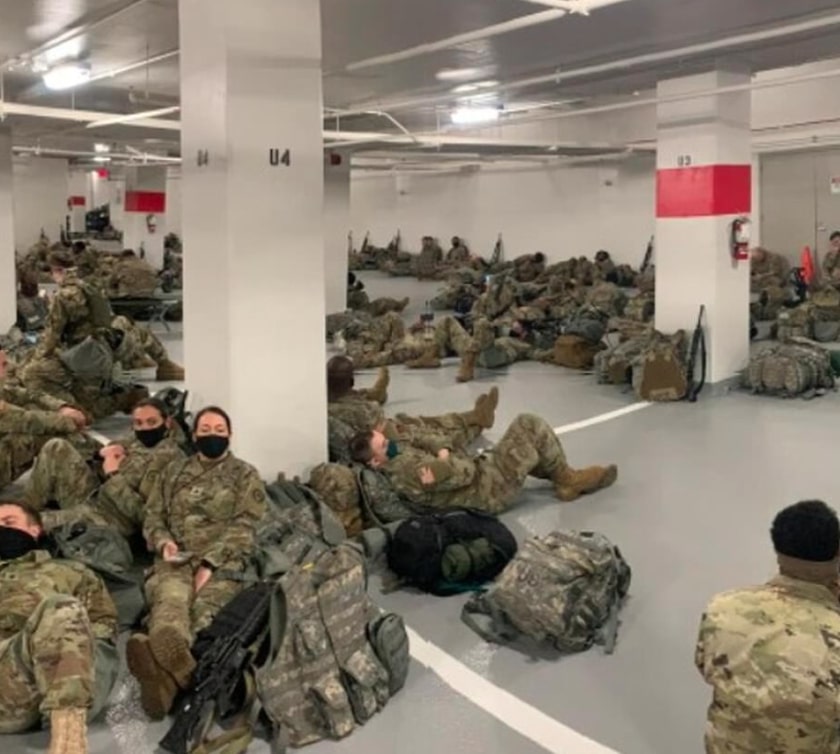 A guardsman claimed their unit had been forced to vacate the Capitol on Thursday and move into the garage.

Conditions for the troops protecting the nation were grim, with one bathroom shared between 5,000 troops, one plug socket, and no internet access.

Soldiers were concerned about sharing a bathroom between so many and being packed into tight spaces during the coronavirus pandemic.

A guardsman told Politico: "Yesterday dozens of senators and congressmen walked down our lines taking photos, shaking our hands and thanking us for our service.

"Within 24 hours, they had no use for us and banished us to the corner of a parking garage. We feel incredibly betrayed."

Another guardsman said: “We honestly just feel betrayed. After everything went seamlessly, we were deemed useless and banished to the corner of a parking garage.”

Both Republicans and Democrats were outraged at the sight of troops sleeping on a cold floor, and demanded answers. 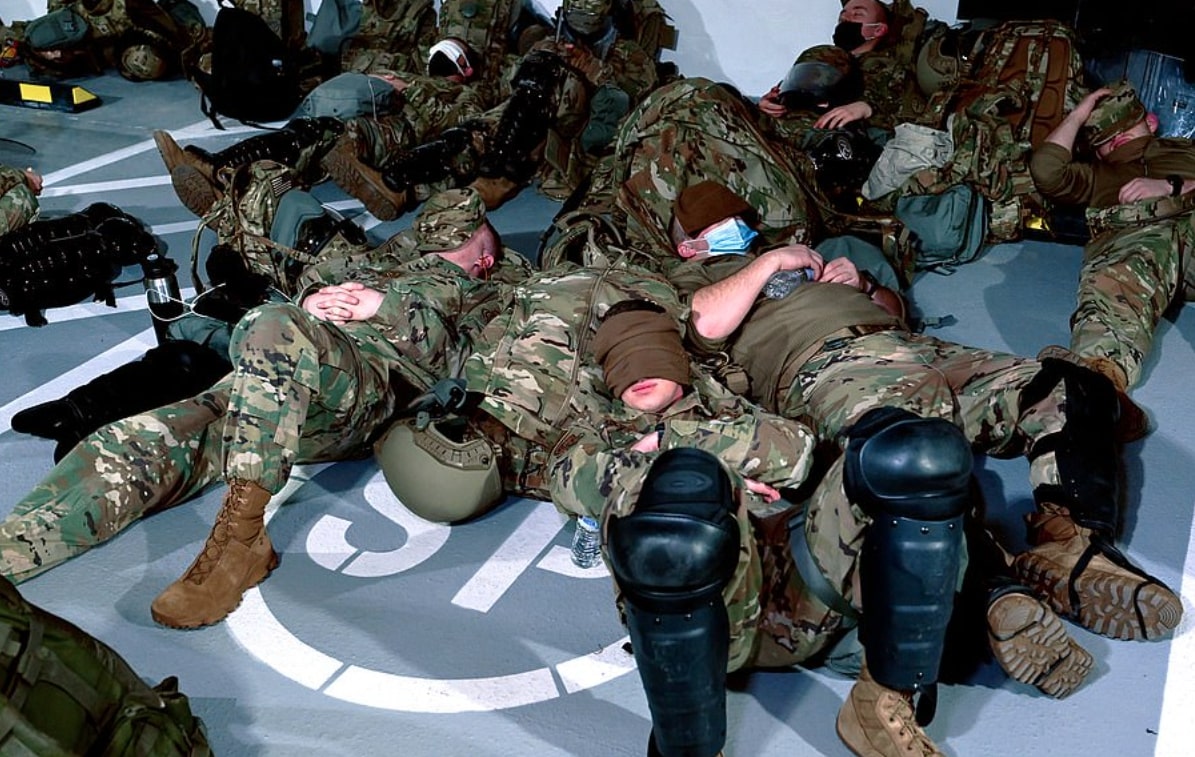 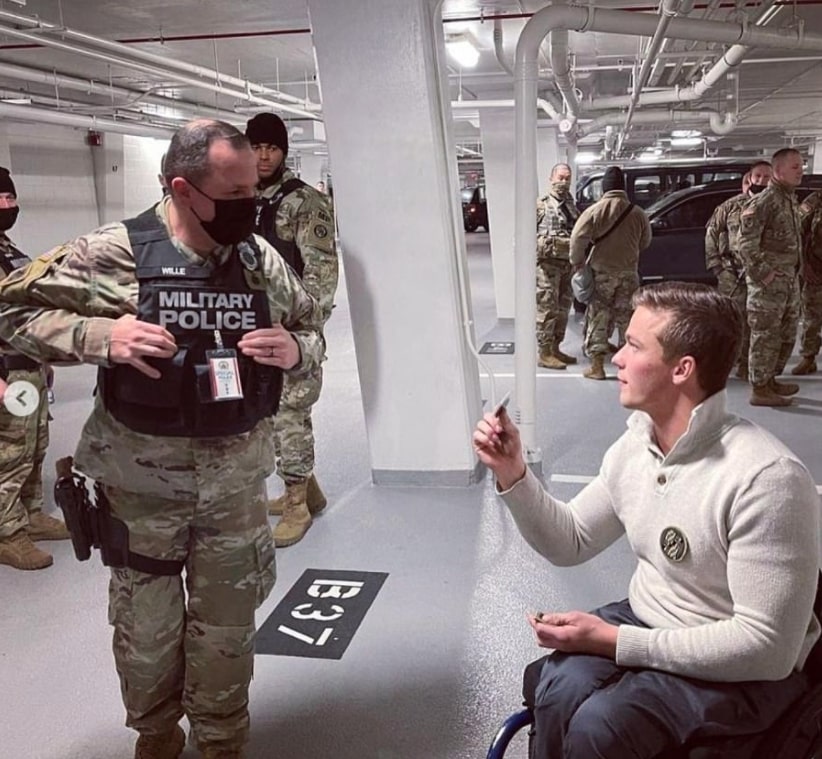 Former National Guard lieutenant colonel and Democrat senator Tammy Duckworth tweeted: “Unreal. I can’t believe that the brave servicemembers we’ve been asking to protect our Capitol and our Constitution these last two weeks would be unceremoniously ordered to vacate the building.

“I am demanding answers ASAP. They can use my office.”

Senate majority leader Chuck Schumer also said: "If this is true, it’s outrageous. I will get to the bottom of this."

Following the outcry, troops have now been moved out of the garages and were ordered to return to the Capitol.

Sen Duckworth added that police had apologised to the Guardsmen and that they were all “out of the garage”.

Guard spokesman Major Matt Murphy said: "Brig. Gen. Janeen Birckhead, Inauguration Task Force Commander, confirms troops are out of the garage and back into the Capitol building as authorized by the USCP Watch Commander and the troops will take their breaks near Emancipation Hall going forward.

"Our troops are going to hotel rooms or other comfortable accommodations at the end of their shifts."

He had previously said guardsmen were asked to move away from the Capitol due to Congress being in session.

He added: "They were temporarily relocated to the Thurgood Marshall Judiciary Center garage with heat and restroom facilities.

"We remain an agile and flexible force to provide for the safety and security of the Capitol and its surrounding areas."

Around 25,000 troops were deployed to Washington DC for the inauguration after a deadly riot on January 6 stormed the Capitol in a bid to overturn the election result, with five people being killed.

Hundreds of National Guard troops slept on the stone floor of the Capitol building with their rifles beside them during the chaos.

The troops were spotted lying down in various parts of the Capitol building, including the Rotunda and the visitor’s center.

Some of the troops leaned their heads against statues, or used their backpacks as pillows.

Republican Representatives Vicky Hartzler and Mike Waltz gave boxes of pizza out to the troops.