An adventurer – and a radical

FRANCIS James was a reporter and a traveller, a fighter pilot and a prisoner of the Germans and of the Chinese. He was a flamboyant eccentric, a 20th Century renaissance man. He died yesterday in Sydney at the age of 74.

For many people, particularly conservatives, he was a most puzzling paradox, combining a deeply held Christian faith with unswerving declarations of support for Asian communist governments.

Indeed, he was denounced for his attitudes on China and Vietnam by three Prime Ministers — Menzies, Holt and Gorton.

He once told a Legacy luncheon in Sydney that the teachings of Mao Zedong “should be read with the Bible by every Australian”.

Was his tongue tucked firmly in his cheek on this occasion? It may well have been. It was often as tempting to him to say outrageous things as it was natural to wear spectacularly eye-catching clothes.

For nearly 40 years his wide-brimmed black velour hats and scarlet-lined capes were a familiar sight in Sydney’s Anglican, literary and journalistic circles, as well as those of overseas capitals.

And, while Francis James may not have been entirely serious in his exhortations concerning the works of Chairman Mao, there was never any doubting his opposition to the Vietnam War. 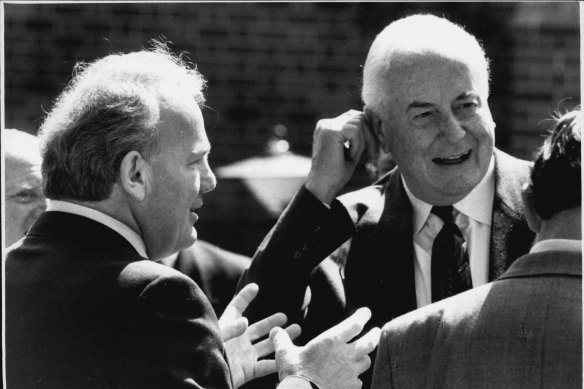 As publisher of ‘The Anglican’ newspaper he enraged the then Prime Minister, Sir Robert Menzies, by breaking the news that Australian forces were to be sent to Vietnam. In 1966, he compounded the offence in the eyes of the Government by travelling to Hanoi to report the war.

It was quite in character, despite his public declarations from time to time, that James never joined the ALP or any other radical or left-wing party. Although he admired Gough Whitlam, he called himself a “Gladstonian Liberal”, asserting often enough (and all who knew him needed no proof of it) “I believe intensely in personal freedom.”

Alfred Francis Phillip James was born in Queenstown, Tasmania, on 21 April, 1918. He was one of three sons of an Anglican priest, the Reverend A. E. James who himself was no slouch in the theatre of eccentricity.

An ardent amateur boxer, James senior was a Methodist minister when he fell in love with a Catholic woman. Each was warned off the other, and so they married anyway. Later, both became Anglicans, he a priest. Their subsequent family became used to moving from one parish to another.

For James, the journeying led to an array of schools, from some of which, legend has it, he was expelled for a variety of impudent exploits. There was also a varied collection of schoolmates including Gough Whitlam at Canberra Grammar and the late Sir John Kerr at Fort Street.

Schooling done, he joined the RAAF in 1936 as its youngest ever cadet. He left it a year later, having disagreed with his seniors on the propriety of officers talking, as opposed only to giving orders, to non-commissioned airmen.

He took up teaching at a Killara preparatory school but dropped that career upon the outbreak of World War II in 1939. He took ship forthwith for England and joined the RAF, first as an aircraftsman but later as a transport pilot. He then switched to fighters but, only weeks after joining a Spitfire squadron in April 1942, was badly burned and taken prisoner when shot down over, Northern France.

After 20 months as a prisoner, he was repatriated to England.

His adventures continued after the war. He was admitted to Oxford on a scholarship and lasted for two years before being sent down from Balliol following an undergraduate joke that involved kidnapping a fellow student, quite possibly at pistol-point, in an effort to encourage him to pay some gaming debts.

Returning to Australia, James joined a fishing partnership operating in the Great Australian Bight. He reaped a tidy profit when he sold his share to his partners, then joined ‘The Sydney Morning Herald’ as its education correspondent and religious editor.

In his distinctive clothes and driving a 1936 Rolls Royce, he became a celebrated Sydney figure.

Later, with ‘The Anglican’, he installed a typewriter in the back seat of the Rolls and sometimes used the car as an office, pulling down the blinds when passers-by became unduly curious.

In 1969 there began perhaps the strangest episode of Francis James’s extraordinary career. He disappeared over the border from Hong Kong into China. For more than three years, until he was released, nothing was heard, from him.

Mystery still surrounds some aspects of his imprisonment, but it was certainly harsh, involving solitary confinement and lengthy interrogation sessions. On several occasions he believed, he was about to be shot.

Yet he always denied that before his arrest he had been engaged in espionage, maintaining that his visit to China was to research a book on Sino-Russian relations.

More than 10 years later James was exonerated when the Chinese admitted that there had never been any charges against him and invited him back to China to receive an apology.

Despite his controversial career Francis James was not an “outsider” in Australian society in the way the term is generally understood. He was as much at home with establishment figures in the church and the officer caste as he was with more shadowy individuals in the world of international politics.

He had about him more than a touch of the grandee, transformed pedantry into a witty art form and was never dull.

“I enjoy all life,” he said. “But I remember the saying of Socrates: “The state is like a great steed, noble but sluggish and I am the gadfly that stirs it on.”

He is survived by his widow, Joyce, two daughters, Kate and Christine, and two sons, Brian and Stephen.