Vandals leave a scene of devastation at Footscray library 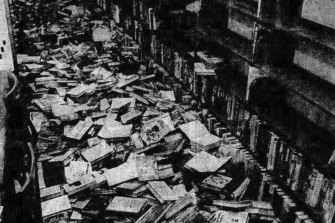 When staff arrived for work yesterday they found that thousands of books had been torn from the shelves and tossed into the aisles. Drawers full of library cards had been upended, and records of books and book withdrawals scattered across the building.

The vandals ransacked the library offices, overturned stands and bookshelves, smashed vases and a typewriter, and stole a small amount of money after jimmying open a coin-operated photocopier.

The librarian, Mr John Boardman, said he believed that as many as 20,000 books had been swept from the shelves. He thought several valuable books, out on loan, might be lost because of the damage to library records.

He said the library would remain closed until Thursday so that staff could clear up the mess.

Footscray Councillor Fred Maddern said he had never seen such wanton damage. “These kids must be caught,” he said.

Earlier this year, vandals broke into the library, smashed windows and scribbled obscenities on the walls.