The Governor-General of the new nation (Sir John Guise) in a broadcast at 12.01 am said: “Papua New Guinea in now independent.” 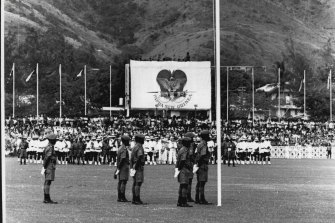 As he spoke, the R.A.N. ship Stalwart fired a 101-gun salute across Port Moresby harbor and fireworks exploded 3000 feet above the city.

They signaled the end of 90 years of colonial rule under British, German and Australian authorities.

In a short emotional speech proclaiming independence, Sir John Guise said: “The constitution of the independent State of Papua New Guinea, under which all power rests with the people, is now in effect.

“We have at this point in time broken with our colonial past.

“Let us unit with the Almighty God’s guidance and help in working together for the future as a strong and free country. 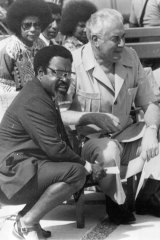 “We now stand as an independent nation in our own right.”

Seven hours earlier, the Australian flag, first raised on Papua New Guinean soil in 1906, was lowered ceremonially for the last time and present to the Australian Governor-General (Sir John Kerr).

The flag was slowly marched off the parade ground as the combined bands of the PNG police, Defence Force pipes and drums and the R.A.N. played Auld Lang Syne.

The flag was folded and presented to Sir John Guise, who then presented it to the Australian Governor-General.

“We are lowering the flag – not tearing it down,” Sir John Guise said.

“This moment and the past years of transition from Australian rule to independence have been happy and peaceful years.

“They have been so because of the foresight of both the Australian and our own leaders. We are able to lower the flag of Australia, with Australians, and friends from many other parts of the world beside us.

“Independence does not mean a new isolation. Rather, independence means we join with the other free peoples of the world to choose our nation’s future and to play a part, even though it may only be a small part, in choosing a future for the children of this planet.”

Sir John Kerr said that while the lowering of the flag marked the formal end to Australia’s colonial power it did not mark the end of Australian interest, concern and involvement.

Mr Somare, in an address to the nation shortly before midnight, said Papua New Guinea had been lucky in achieving independence without fighting and bloodshed.

“I wish to remind all of us that this is just the beginning.

“Now we must stand on our own two feet and work harder than ever before.”