Hunt goes on for gas leak

The day they deserted Swanston Street during the rush hours 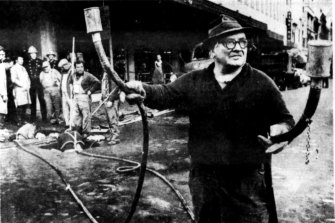 A Gas and Fuel worker holds air pipes for his colleagues working in gas-filled holes on the corner of Swanston and Little Collins streets.Credit:The Age Archives

They traced the leak to a 10-ft. section of the gas main at the corner of Swanston and Little Collins streets but could not pinpoint it.

The chief engineer of the Gas and Fuel Corporation (Mr John Shaw) said last night the search would continue today until the leak was detected.

“However, the danger period is now over,” he said.

“Gas to three buildings has been cut off and will not be turned on again until the situation has been rectified.”

The leak, which threatened to set off explosions, forced the cordoning-off of the heart of the City’s Golden Mile for almost three hours. 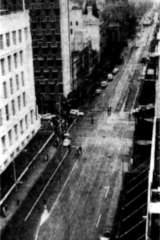 All traffic was diverted in Swanston Street between Collins and Bourke streets and shoppers were ordered from the area.

The leak was first reported by an employee in the Century Building, at the corner of Swanston and Little Collins streets, shortly before midday.

About 400 employees in the 12-storey building were evacuated, including 40 people from the basement theatre.

Other buildings evacuated were Jane Peel Fashions and the 40 factory staff at Cann’s Fashions.

About 10 shops near the Century Building were forced to close for the afternoon.

The evacuation came after Gas and Fuel Corporation engineers confirmed the leak.

The fire brigade and ambulance stood by as police used loud-hailers to clear Swanston Street.

Shoppers were ordered to leave and smoking was banned.

The drama ended at 3.55 pm when workmen sealed the gas supply to the faulty area.

Mr Shaw said the area had been converted to natural gas about seven hours before the leak, but that was only a coincidence.