Passport chaos will get WORSE by the summer: Worker warns 10-week visa backlog is the ‘tip of the iceberg’ – as it’s revealed French company running their helplines is same firm behind ‘shocking’ Help for Ukraine scheme

A Passport Office worker has warned that chaos will worsen and the 10-week visa backlog is just the ‘tip of the iceberg’ – as it is revealed the French company running their helplines is the same firm behind the UK’s ‘shocking’ Help for Ukraine scheme.

Renewal chaos has left 700,000 applications still awaiting clearance amid fears over a summer of cancelled holidays.

Prime Minister Boris Johnson was said to be ‘horrified’ at the backlog yesterday, but an insider has now told of how chaos will worsen by the summer because the current system for applications is not ‘fit for purpose’.

They revealed the backlog of applications has left overstretched staff ‘panicked’ as they attempt to keep up with a ‘never-ending’ workload.

The passport worker also told The I that the office is trying to hire 1,700 more staff, but ‘haven’t realised anything like that number’ due to difficulties recruiting on ‘low wages and temporary contracts’.

Holidaymakers in Britain are now being advised to leave at least ten weeks to get a new passport, but MPs have said this target is being regularly breached.

The Home Office has a £22.8million five-year contract with the private firm to provide ‘contact centre services’ including a ‘passport advice service for HM Passport Office’.

But Passport Office director-general Abigail Tierney, who herself has faced criticism over working from home despite the backlog, hauled in Teleperformance’s chief executive to demand improvements on Thursday.

And it can now be revealed that the firm is responsible for helplines as part of the UK’s much-maligned Ukraine refugee scheme that has left thousands unable to access updates over the status of their visa applications, The Telegraph reports. 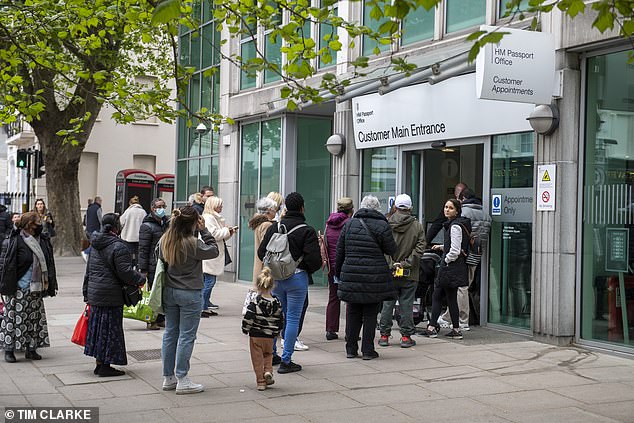 People pictured queuing outside the Passport Office in Victoria, London, on Wednesday amid the huge backlog of applications 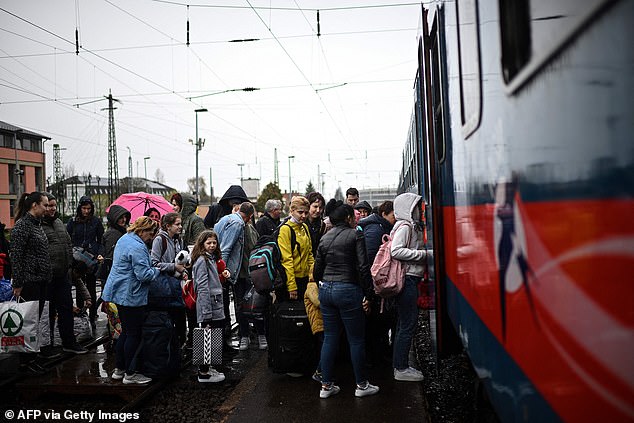 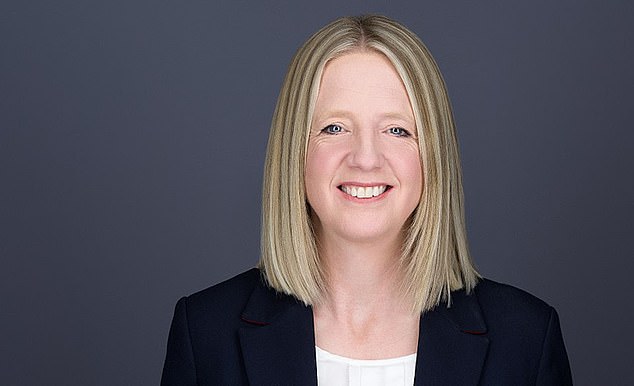 The Home Office has insisted that the Passport Office’s £160,000-a-year director-general Abi Tierney, who it is claimed works from home at her village property in Leicestershire, 100 miles away from its London headquarters, has ‘precisely zero bearing on the current situation with passports’ 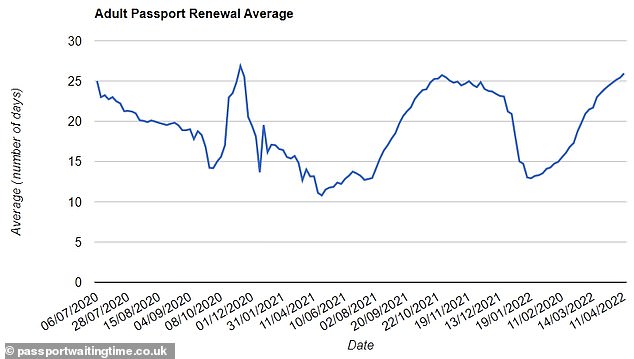 Unofficial waiting times for adult passport renewals in the past two years, shown in a graph from passportwaitingtime.co.uk

It comes after Mr Johnson delivered an ultimatum to stay-at-home officials as he threatened to ‘privatise the a***’ off the Passport Office and DVLA amid huge backlogs.

The Prime Minister said families deserve better than the ‘post-Covid mañana culture’ that has seen thousands of civil servants refusing to return to the office.

Teleperformance is unable to access the Home Office’s security database for security reasons, meaning it is only able to support applicants with basic information like eligibility criteria.

The French-owned company contracted to run the Passport Office’s contact centre has been ordered to hire more people to ease ‘unacceptable’ delays.

Teleperformance, the private firm responsible for the office’s call handling, has been ‘urgently tasked to add additional staff’ by the Home Office.

The head of the Passport Office, Abi Tierney, will discuss Teleperformance’s problems with its chief executive this week, according to The Times.

The company has been heavily criticised by exasperated applicants in recent weeks.

The Home Office has a £22.8million five-year contract with Teleperformance to provide ‘contact centre services’ including a ‘passport advice service for HM Passport Office’.

Refugees were also only told of the issues once a Home Office caseworker had contacted them, leaving families unable to make travel arrangements and delaying their arrival to the UK.

Only about a fifth of refugees who have been issued with visas under the Homes for Ukraine scheme have arrived in the UK, Government figures show.

But as of Monday just 27,100 Ukrainians had arrived in the UK, according to figures from the Department for Levelling Up, Housing and Communities and the Home Office.

This includes 11,110 through the Homes for Ukraine sponsorship route – 21.6 per cent of the 51,300 refugees with visas granted.

There are multiple cases where families are unable to travel to the UK because not all family members have received their permission to travel letters or visas, while there is also ongoing widespread concern about the length of time it has taken for visas to be issued.

Refugees minister Lord Harrington has said refugees will be offered flights to assist with travel to the UK if needed.

Teleperformance was awarded the contract for the refugee scheme by the Home Office despite warnings from borders and immigration that it would risk ‘reputational damage’ over the UK’s involvement in separate contract running visa centres in Europe.

David Neal, chief inspector of the watchdog, said this was because of the firm’s focus on generating income for its work running the centres for the Government – expressing concerns of ‘upselling’ for services such as fast-tracking applications. 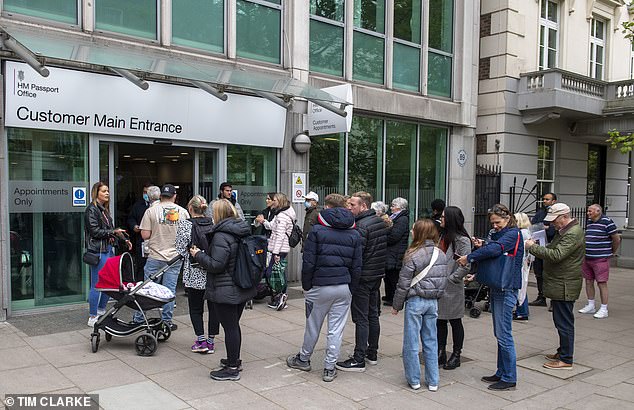 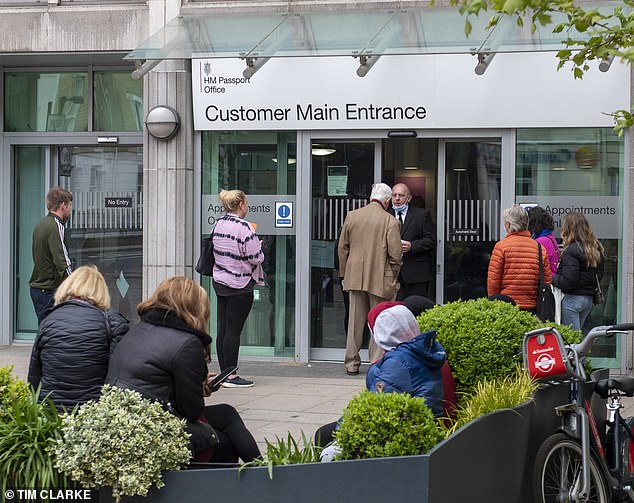 The Passport Office headquarters are located in the Victoria area of London, with people seen waiting outsideon Thursday 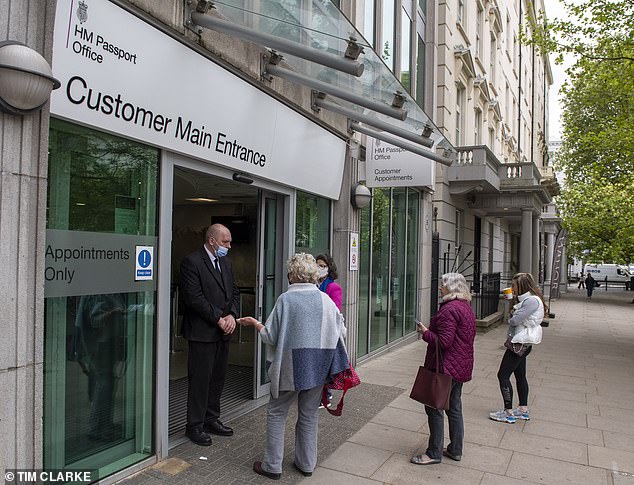 Teleperformance also ran the helplines for the Government’s Track and Trace system after being awarded a contract by the Test and Trace scheme.

The programme was later deemed an ‘eye-wateringly expensive’ failure in a damning report by MPs.

They said it failed to break chains of Covid transmission, prevent lockdowns or enable people to return to a more normal way of life.

Its website describes the company as an ‘industry leader in building effective teams and delivering exceptional business results’.

It adds: ‘Like these athletic champions, we never shy away from a challenge. Instead, we face our clients’ business challenges head-on and help them transform to reach new heights of success.’

A Government spokesperson said: ‘We expect the highest standards from our suppliers, both in the UK and overseas, and we work closely with them to ensure that their services and systems are rigorously reviewed and support the customer journey.

‘The Ukraine Helpline team have been given appropriate training, and although they don’t have access to UKVI systems they have robust escalation points into UK Visa and Immigration for Ukraine Family Scheme and Homes For Ukraine queries.’.

It comes after Boris Johnson summoned Passport Office bosses to Downing Street to explain the passport renewal chaos which has seen 700,000 outstanding applications still to clear amid fears over a summer of cancelled holidays.

The Prime Minister is said to be ‘horrified’ at the backlog – but the Home Office insisted today that the agency’s £160,000-a-year director-general working from home at her village property in Leicestershire, 100 miles away from its London headquarters, has ‘precisely zero bearing on the current situation with passports’.

Abi Tierney, 48, who was appointed as director-general in early 2020 when the pandemic began and lives with her two young sons, is battling to control the chaos as customer services teams continue to work from home.

Home Office sources said Dr Tierney, who is responsible for leading 3,500 Passport Office staff, spends most of her time working at its centres around Britain – including in London, where the headquarters is located in Victoria.

But The Telegraph claimed yesterday that a resident of the Leicestershire village where Dr Tierney lives said she appeared to be based there, 107 miles from London.

Conservative former minister David Jones told MailOnline yesterday that the claim ‘underlines the importance of civil servants getting back to the office environment’, adding: ‘It beggars belief that any senior official would be staying at home when her office is so clearly in crisis.’