A woman accused of abusing a foster child has admitted asking him to lick soap in order to instill a fear of telling lies, but said she only beat him with a belt as punishment four times before she decided to stop.

Avril Campbell, 74, and her husband Dennis looked after Christopher Scott between April 1976 and February 1981.

Mr Scott has previously told the Scottish Child Abuse Inquiry of his alleged ordeal in their care, which he said included harsh punishments, humiliation and regular beatings.

On Wednesday, Mrs Campbell told the Edinburgh-based inquiry she did use the belt, but only four times, and once gave soap to him as a punishment.

She denied ever using the buckle in her punishments. 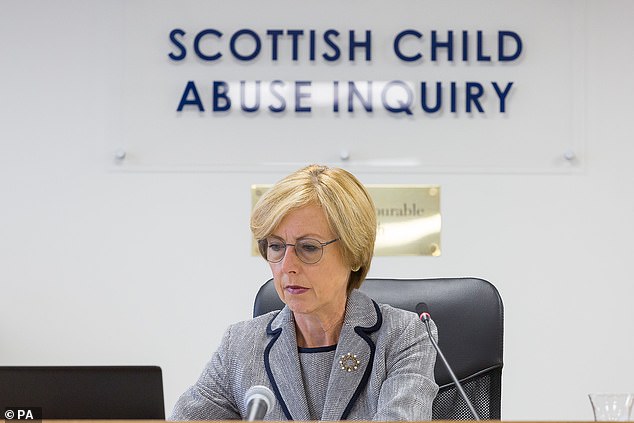 ‘The first two times (I used the belt) it was just rubbish,’ she told Lady Smith, the chair of the inquiry. Mrs Campbell added she had never seen it done before. ‘The third time I did it it was all right, and the fourth time I thought, “no, I’m not going to do this anymore”.’

Mrs Campbell told Ruth Innes QC, the inquiry’s senior counsel, that she never slapped or punched Mr Scott. ‘I was a nurse, I was careful about smacking,’ she said.

She told Lady Smith she gave her three oldest children, including Mr Scott, a ‘taste’ of soap but insisted she did not force them to try it.

‘I gave it to them and they they just licked it, so they knew what it tasted like,’ she told the inquiry.

‘It was to stop them telling lies. I don’t think it’s good for children to tell lies.’

When challenged, she insisted they were ‘a good age’ by this time: ‘We heard it from other people, it was not my idea.

‘It was quite a common punishment. I tried it once because I knew it happened.’

And, she told chairwoman Lady Smith: ‘I’m surprised you’ve not heard of it. I wouldn’t have thought of it myself.’

Mr Scott has said she forced him to face the wall, which she denied to the inquiry, and said it was ‘not true’ he was served with a previous meal if he did not eat it.

Mr Scott, who has waived his right to anonymity, had previously told the inquiry he was made to go outside naked. Mrs Campbell said she ‘didn’t put him outside he went outside himself’.

‘He used to come up with some unusual ideas,’ she said.

During her evidence, she suggested Mr Scott was after money. ‘That’s the only thing I can think, the only thing worthwhile I can see why he would say these things,’ she said. ‘We thought we were going to be helping him.’

Mr Campbell was asked about Mr Scott’s claims he was punished for wetting the bed, and described it as a ‘heinous lie’ when asked if the foster child’s face was ever put into the damp bedsheets.

‘She really was a good mother and a good foster mother, and those are just lies,’ he told the inquiry.

He told Ms Innes he ‘regretted’ using the belt but it was a rare occurrence, and told the inquiry it ‘wasn’t excessive and there wasn’t any bleeding’.

‘We were smackers,’ he said. ‘It was a different world we lived in then.’

The inquiry heard of a time when money was left in a bedroom and Mr Scott was encouraged to go and retrieve a nappy.

‘I felt he sensed it, he knew that we were setting him up,’ he told the court, before he described a claim Mr Scott was punished for not taking the money as ‘just another lie’.

He also told of the time he slapped one of his daughters across the face when she was a teenager, but that he would ‘always regret that’ and he ‘wept’ after.

Mr Campbell apologised for ‘coming across a wee bit agitated and a wee bit aggressive’ during questioning, but said he and his wife had been through more than three years of ‘hell’.

He said the couple had been cleared by the jury, and the inquiry was bringing up ‘rotten, stinking lies told about me and my wife’.