Former New Jersey Governor Chris Christie announced on Saturday that he tested positive for COVID-19, the latest Trump administration insider to come down with the virus.

"I just received word that I am positive for COVID-19," he tweeted on Saturday. "I want to thank all of my friends and colleagues who have reached out to ask how I was feeling in the last day or two. I will be receiving medical attention today and will keep the necessary folks apprised of my condition." 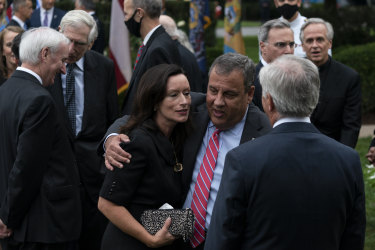 Chris Christie speaks with others after President Donald Trump announces Judge Amy Coney Barrett as his nominee to the Supreme Court.Credit:

Christie played the role of Joe Biden in debate preparation for the president before last Tuesday's televised showdown between President Donald Trump and his Democratic challenger in Cleveland.

Attendees at the outdoor event sat closely together, with few masks in evidence, and some were invited to a smaller event inside the White House.