An airline in Taiwan drew a heart shape in the air during a destination-free flight. Royal Brunei Airlines served up brunch and views of Borneo to give travel-starved passengers a thrill.

This week, Ukraine International Airlines adds to the pandemic-era trend with an apocalyptic twist: a sold-out flight over the site of the Chernobyl nuclear disaster timed to the 35th anniversary. 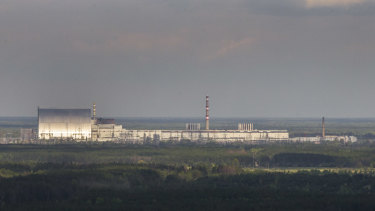 An aerial view of the Chernobyl nuclear power plant and a new shelter, left, installed over the exploded reactor in Chernobyl, Ukraine.Credit:AP

“Passengers of the flight will be able not only to see Kiev and Chernobyl from the most unusual angles and the minimum allowable height – 900 metres, but also to deepen their knowledge about the causes and consequences of the Chernobyl accident,” the airline says on its website.

The April 25 flight, the day before the anniversary, will include a professional guide from the Chernobyl Tour company.

Before the pandemic, tourism to the abandoned nuclear power plant and neighbouring ghost town of Pripyat had seen a sharp increase following an HBO miniseries.

Ukraine’s government said in 2019 that it wanted the area to become an official tourist site. Chernobyl Tour offers its own air tour of the site by small plane or helicopter.

Sunday’s flight will be on an Embraer 195 jet. It will be similar to past flights to nowhere the airline has flown offering “the world in the eyes of a pilot.”

Those 90-minute flights also passed over Pripyat and Chernobyl but had a heavier focus on hearing from the pilots.

“Honestly, this was possible only due to the pandemic,” she said.

“First, there are available aircraft, and secondly, our team has a little free time” that they can devote to “creative and nonstandard projects.”