THE Financial Times has apologised and a reporter resigned after a private Zoom call was accessed.

Mark di Stefano joined a staff conference call for The Independent and Evening Standard, in which furlough news was broken to the employees. 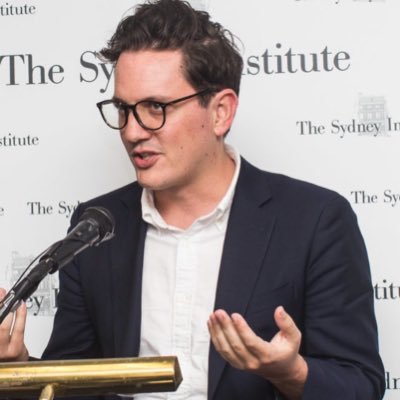 Di Stefano, who only joined the FT from BuzzFeed in January, was suspended and has now tendered his resignation.

He confirmed the news on Twitter today, writing: "Hi, letting everyone know today was my last day at the FT.

"This afternoon I offered my resignation. Thank you everyone who has given support.

"I’m now going to take some time away and log off x."

The Independent reported journalists saw Di Stefano's name appear on the private video call for 16 seconds before he left the meeting.

Log files later showed his FT.com email address had been on the Independent's Zoom call on Thursday.

And soon after, it was reported an unnamed account joined the call, with the video switched off.

The account was anonymous however it has been claimed it was linked to the mobile phone used by the same Financial Times reporter.

'TODAY WAS MY LAST DAY'

In both cases, Di Stefano tweeted details of the meetings before they ended and articles about both the paper' decisions were then published in the Financial Times.

In a statement on its website, the Financial Times said: “Last week, the FT received a complaint from The Independent that a reporter had joined a staff conference call without authorisation. Access details had been shared with him.

“The journalist in question has now resigned from the company. The FT wishes to apologise to The Independent and the Evening Standard, which subsequently informed the FT that the same reporter had accessed a meeting it held.”

The Evening Standard's editor George Osborne had tweeted: "What’s the FT got to say about this?

"Their own code of conduct says ‘the press must not seek to obtain or publish material acquired by… intercepting private or mobile telephone calls, messages or emails'."

The editor of The Independent Christian Broughton said: "We respect freedom of speech and understand the challenges of newsgathering, but The Independent considers the presence of a third-party journalist in a staff briefing to be entirely inappropriate and an unwarranted intrusion into our employees’ privacy.

"Our spokesperson had a full statement prepared for the press – any interested reporters only needed to call and ask."

A spokesperson for the Evening Standard said: "For a journalist from the FT to have illegitimately accessed a private Zoom call is unacceptable.

"We are sure the FT will want to offer an immediate explanation and an apology." 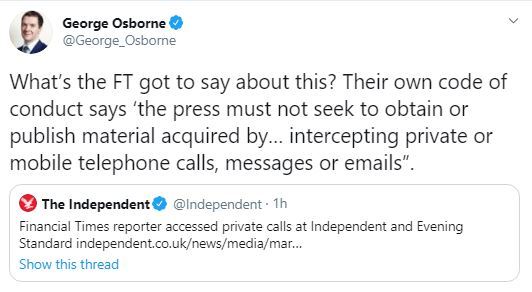