London: Five years ago almost to the day, the Queen and Prince Philip shuffled into the White Drawing Room of Windsor Castle to open a small rectangular box recently arrived from Australia.

The event didn’t attract anywhere near as much attention as the decision by Tony Abbott three months earlier that had triggered the special delivery.

The box contained the Insignia of a Knight of the Order of Australia, which was duly presented following Abbott’s surprise move of Australia Day 2015 to award Philip the country’s highest honour. 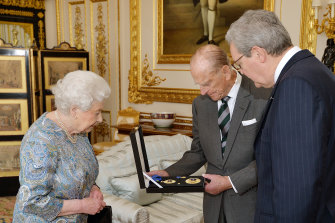 The Queen watches on as Australia’s then high commissioner to the UK Alexander Downer presents the insignia to Prince Philip.Credit:Getty

Abbott said at the time that the Duke of Edinburgh had been “a great servant of Australia” and noted Malcolm Fraser had also handed the award to Prince Charles in 1981.

But the devoted monarchist’s best intentions were a political disaster. Abbott was widely mocked by colleagues who suspected the furore might be the beginning of the end of his leadership. They were right: Abbott was gone by September that year.

But in a final twist to the saga, the insignia presented to Philip at Windsor Castle that day five years ago will now take pride of place at his funeral this Saturday. 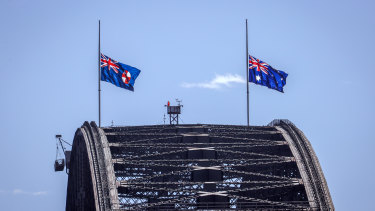 Knights and dames in the Order of Australia existed between 1976 and 1986. Abbott reinstated them in 2014 but his successor Malcolm Turnbull abolished them again the next year.

Abbott knows the insignia will be displayed at Saturday’s funeral and is chuffed.

In an opinion piece for News Corp papers over the weekend, the former prime minister said “what’s now belatedly being recognised is how good and decent a man we have lost”.

“Part of the human stain is our tendency to look for the minor flaws in people rather than try to discern their fundamental strengths,” Abbott said. “At times, he suffered at the hands of the media, for supposed gaffes.

“How small-minded that all seems, now that this pillar of duty and service has joined the spirit world; and those of us who scoffed at his humour or scorned the Crown he served have to face the awkward reality that he was almost certainly a better man than any of us.”

Abbott said Philip was partly responsible for making Queen Elizabeth II’s reign the most distinguished in the monarchy’s 1200-year history.

“Prince Philip had been part of the wartime naval defence of Australia, he’d opened the 1956 Melbourne Olympics, visited our country more than 20 times, and inspired the award gained by three quarters of a million young Australians,” Abbott said.

“If that wasn’t service to our country, what was?”

And of the knighthood that caused so much grief? “I hope it gave him some satisfaction in his last years, especially as it’s so clear now – if not to everyone then – how much he deserved it.”