Living within Islamic State’s caliphate ‘does not make you a terrorist’, court hears as female Irish ex-soldier denies being a member of the group

A barrister for former Irish soldier Lisa Smith has told her trial that a person in the geographical area of the so-called Islamic State is not ‘prima facie a terrorist’.

Michael O’Higgins, defence counsel for Ms Smith, told the Special Criminal Court in Dublin that there must be a distinction made between the territory of Syria and the terrorist organisation Isis.

The Co Louth woman, 39, has pleaded not guilty to charges of membership of ISIS and providing funds to benefit the group.

Smith left the Irish military in 2011 after she converted to Islam, before travelling to a IS-controlled region in Syria where she married Sajid Aslam, the court heard.

The prosecution says her husband, a UK national, carried out ‘border patrol’ work for ISIS, and that he ‘had done a snipers course on her advice.’

Delivering his closing speech following a nine-week trial, O’Higgins told the three-judge, non-jury court that a decision by an individual to travel to the ISIS-controlled territory has been closely linked as an act of support for Isis.

He said, however, that support for the terrorist organisation does not make an individual one of its members. 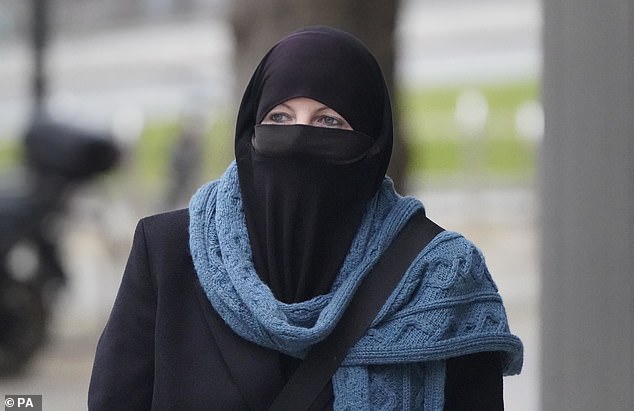 Former member of the Defence Forces Lisa Smith arriving at the Special Criminal Court in Dublin where she is facing terror-related charges. Picture date: Wednesday March 30, 2022 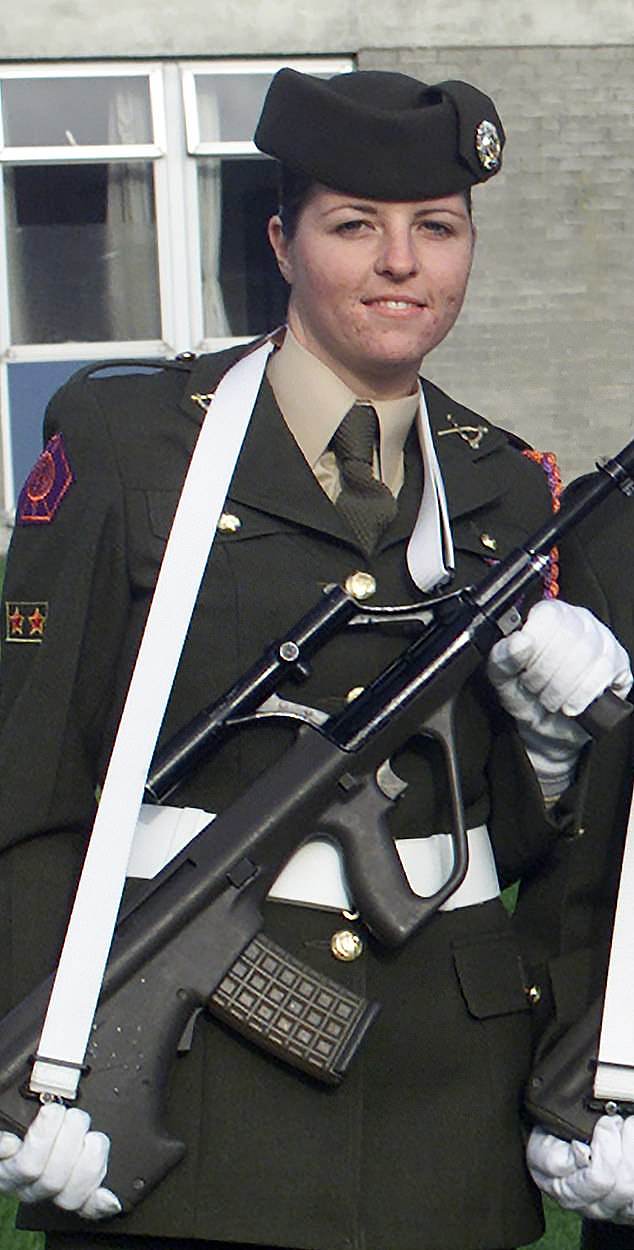 Smith left the Irish military in 2011 after she converted to Islam, before travelling to a IS-controlled region in Syria where she married Sajid Aslam, the court heard 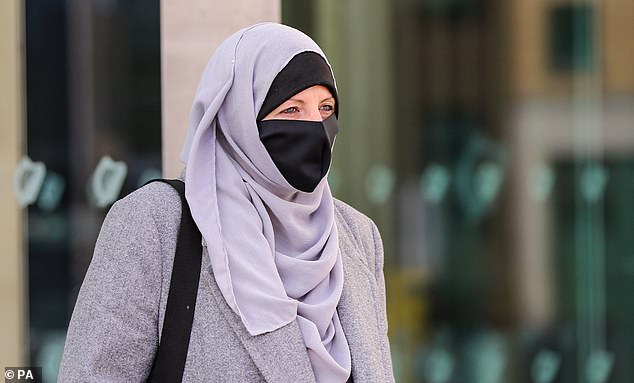 The court was told that thousands of people from across the world travelled to Syria following a calling by terrorist leader Abu Bakr al-Baghdadi.

Mr O’Higgins said that one ‘of the thorns in the case’ is that the territory of Syria, the secretariat and the terrorist organisation are terms that have been used interchangeably, which he said the court ‘cannot do’.

‘It must see a distinction and cannot simply say anyone in the geographical boundaries is prima facie a terrorist,’ he added.

‘It is not a safe basis to impose criminality liability.’

Mr O’Higgins said that mental element associated with the crime must be ‘teased out’.

‘The mental element involves the following: I want to be a member. It’s not a subsumed status, the organisation who admits members must agree you are a member.

‘It’s not quite as precise as an offer and consideration, it must be an assessment of whether that person is accepted as a member. It is not something that is conferred and that is what is missing in this case.

‘Taking the prosecution at its height, the indicia are matters which, at a stretch, could be of some form of assistance, could be coterminous of membership.’

He said the only ‘positive act’ cited by the prosecution of Ms Smith assisting Isis is by cooking and cleaning for her husband, a UK national who the prosecution claims undertook ‘border control’ for Islamic State.

He said that prosecuting counsel Sean Gillane reproduced evidence from Dr Florence Gaub, an expert on Middle Eastern conflicts, that Isis fighters did not live in barracks and had to be brought home to be fed and looked after.

He said this was ‘sobering’ and something the court should take into consideration.

He said the assertion portrayed by the prosecution that the thousands of Muslims who travelled to Syria were turned into ‘robots’ must be ‘cast as far away as possible’. 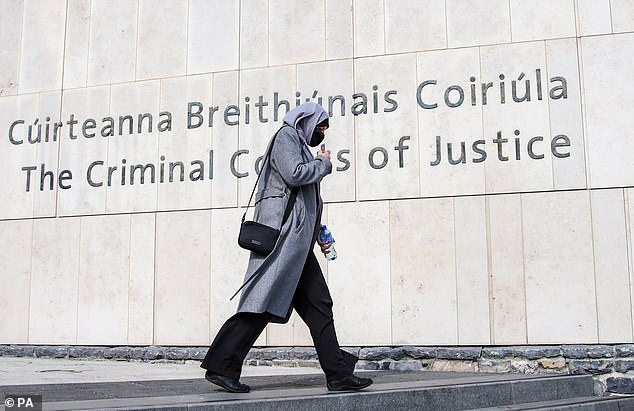 The prosecution says her husband, a UK national, carried out ‘border patrol’ work for ISIS, and that he ‘had done a snipers course on her advice.’ The Co Louth woman, 39, has pleaded not guilty to charges of membership of IS and providing funds to benefit the group

Ms Smith, from Dundalk, travelled to Syria in 2015.

Mr O’Higgins was also critical of expert evidence given by Dr Gaub, particularly on her assessment that Muslims who travelled to Syria were given preferential treatment over native Syrians.

She previously told the court that they had better access to house and received more security.

Mr O’Higgins said the underpinning of Dr Gaub’s opinion was ‘woolly’ and did not stand up to the high level to impose criminality liability on someone.

Mr O’Higgins said that Ms Smith was not a person who had a lot of money.

He said she had 25,00 euro, but that went towards doing up her parents’ separate homes.

He said there is ‘no doubting that she is a generous person with a good heart’.

The three-judge panel is to consider a further legal matter next week before retiring to consider their ruling.

Yesterday, in his closing speech, prosecuting counsel Sean Gillane told the three-judge, non-jury court that the ‘element of buyer’s remorse’ asserted was not a defence.

‘It’s important to resist any attempt to conflate the nomenclature, she is being prosecuted for joining a terrorist group.

‘There are many straw men in the case that obscure the real issue. To ask the court to consider the merits, legitimacy of a caliphate is about as valid as asking the court to pronounce on the existence of heaven or hell.’ 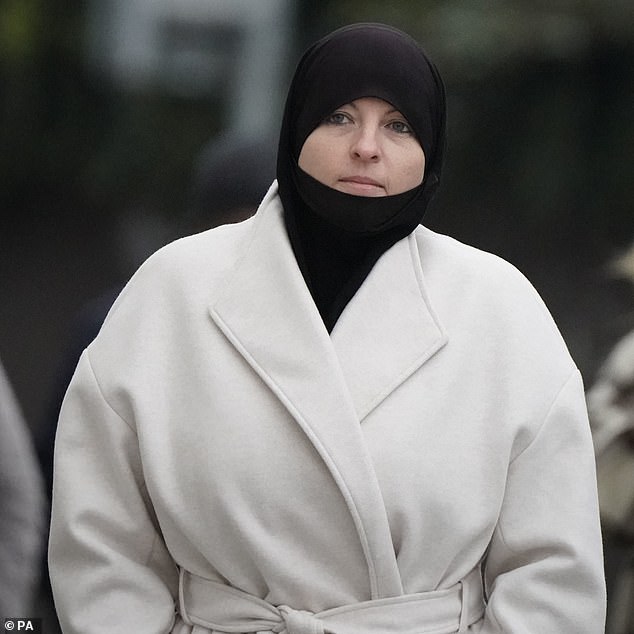 Former member of the Defence Forces Lisa Smith arriving at the Special Criminal Court in Dublin where she is facing terror-related charges. Picture date: Tuesday January 25, 2022

Gillane continued: ‘The fact that followers of a religion do not have a monopoly on sincerity of belief, it hardly needs to be expressed.

‘Belief is neither here nor there for the purposes of what is to be assessed.

‘The suggested sincerity with which she holds those beliefs, her sincerity or otherwise is besides the central point.

‘The self-declared caliphate is not a country, it is not a nation state, it is a proto-state created by an illegal organisation, a gang, which exists solely through its members with Abu Bakr al-Baghdadi declared leader of that organisation.’

The prosecutor said that Ms Smith’s decision to travel to ISIS territory in 2015 did not ‘involve some missing of a target on an otherwise lawful and wholesome journey’.

‘It is not a case of a simple or innocent act of travel or near presence at a place in an unfortunate point in time,’ Mr Gillane added.

‘An element of buyer’s remorse has been asserted, it is understandable, but that is not a defence.

‘It is the case on the evidence that Ms Smith specifically addressed, assessed, analysed and ultimately answered the call to migrate to this place controlled by ISIS, and this is the Hijrah referred to in the context of the case.’