Female hunter, 36, who boasted of killing and skinning husky pup after mistaking it for wolf pleads not guilty after being cited for animal cruelty

A Montana woman who sparked outrage when she shot, killed and skinned a six-month-old puppy she thought was a wolf has pleaded not guilty after being charged with a misdemeanor citation of animal cruelty.

Amber Rose Barnes, 36, of Martin City, was trolled by thousands as people immediately noticed the animal she’d killed was a Siberian husky pup.

Making matters worse, she then defended her actions.

‘During this time, safety was my top priority this animal was growling howling and coming at me like it was going to eat me.

‘Yes I made a mistake…either way yes I would still have shot it because it was aggressive and coming directly for me!’ she said.

Barnes avoided being charged with a hunting violation – because ‘the incident did not involve an animal under the agency’s jurisdiction’, confirmed The Montana Department of Fish, Wildlife and Parks. 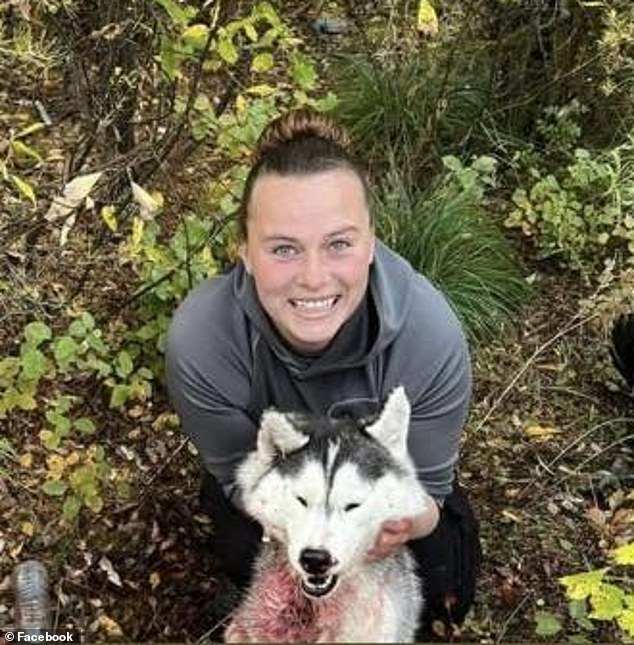 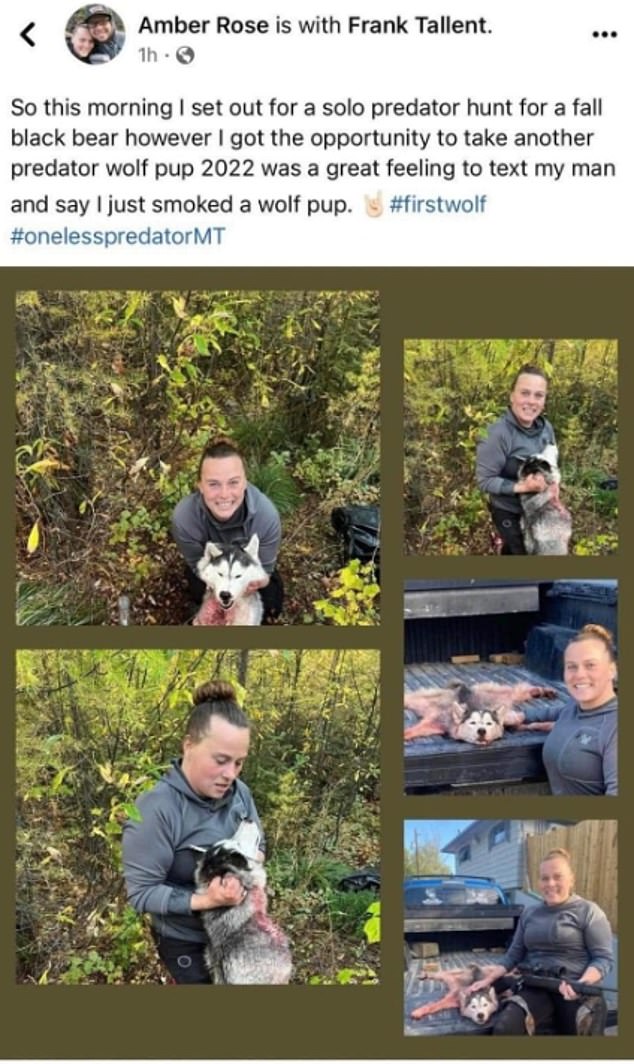 License to kill: This is the original post that Barnes shared with friends. She said she believed the animal was a ‘wolf pup’ 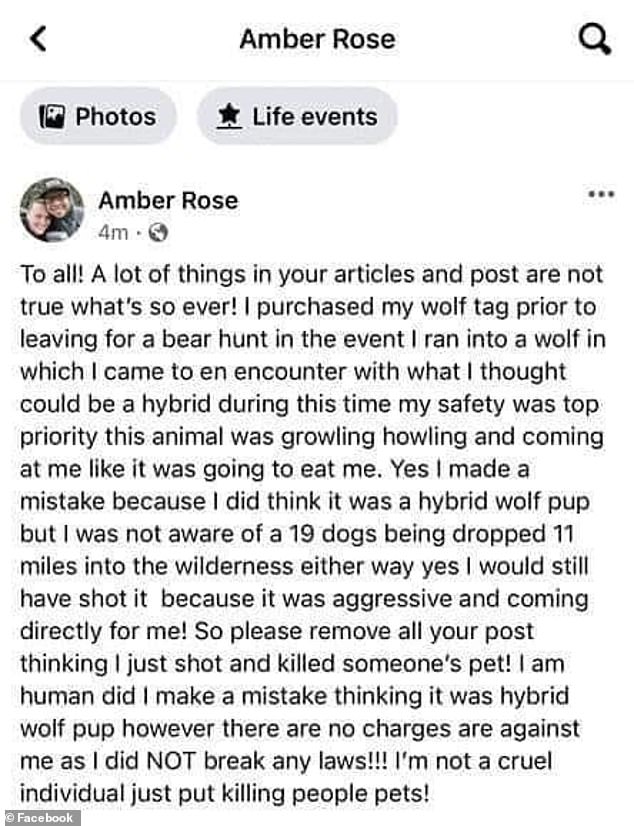 Barnes provoked fury online when she posted a series of graphic images of herself with the lifeless pup online.

Along with a collage of five shots of herself with the dead dog, she wrote, ‘So this morning I set out for a solo predator hunt for a fall black bear however I got the opportunity to take another predator wolf pup 2022 was a great feeling to text my man and say I just smoked a wolf pup #firstworld #onelesspredatorMT.’

Barnes had ventured into Flathead National Forest in Doris Creek, sixty miles south of Glacier National Park that morning looking for a black bear when she came across what she believed to be a wolf.

In one especially gruesome picture, Barnes posed with the Husky sprawled in her flatbed truck as she smiles striking the lifeless head of the dog and gripping her rifle.

Even once her error had been identified, Barnes defended her actions and told her Facebook audience she would kill the dog again. 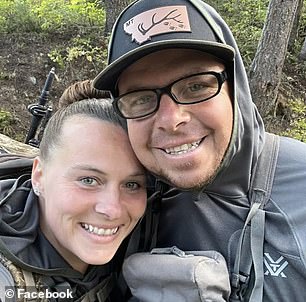 Rose was accompanied on the hunting trip in Montana’s Flathead County with her hunter partner Frank Tallent, who launched an expletive-laced rant in Barnes’ defense

Barnes’ partner Frank Tallent also leapt to her defense at the time as the online mob descended and dubbed her the ‘Montana butcher.’

‘Ya my girl friend was out hunting and shot a f *****g dog that was dumped out in the woods.’

The deceased puppy turned out to be one of nearly a dozen Husky pups that had been abandoned in the woods.

Many of the puppies had parvovirus, an often deadline disease for dogs.

In the aftermath of the shooting, authorities worked to determine whether Barnes had a license to hunt wolves, which she said she did.

The Montana Department of Fish, Wildlife and Parks later confirmed to Fox News that Barnes had purchased the appropriate license.

In Montana, wolf hunting is legal with a license. An individual is allowed to legally kill or trap 20 wolves a season.

Barnes did not immediately respond to a request for comment from the Daily Mail. 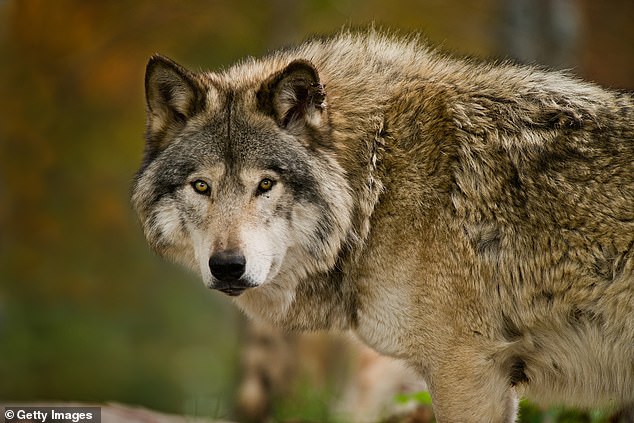 In Montana, wolf hunting is legal with a license. A person is allowed to legally kill or trap 20 per season. Above, a gray wolf 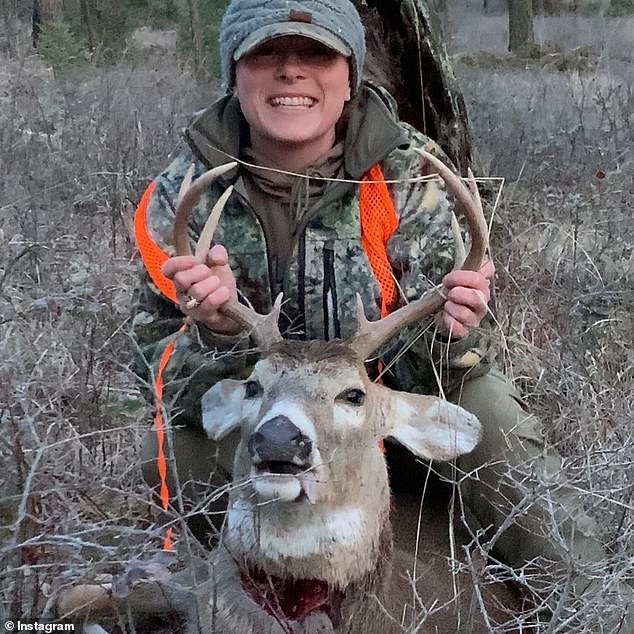