A review has found “critical errors” were made by a federal government department during the Ruby Princess COVID-19 debacle in Sydney last year.

The review, conducted by the Inspector-General of Biosecurity Rob Delane, identified a series of failures within the Department of Agriculture that likely contributed to the outbreak, including in the years leading up to the ship’s arrival in Sydney. 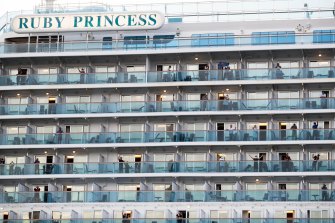 A report has found failings of the Agriculture Department likely contributed to the Ruby Princess outbreak. Credit:Janie Barrett

“It is perplexing that, in February 2020, the world watched the spread of COVID-19 infection and implications unfold on the Diamond Princess cruise ship in Japan, but agriculture was ‘too little and too late’ in being prepared to handle potential biosecurity … issues for numerous cruise ships steaming to Australian ports,” his report read.

The Ruby Princess arrived at the Port of Sydney on March 19 last year and almost 2700 passengers, some with cold and flu-like symptoms, were allowed to freely leave the ship after it docked.

In the following weeks, more than 663 passengers and crew tested positive to COVID-19 and 28 passengers died.

The Inspector-General’s report said the ship’s medical logs were not checked by the department’s biosecurity officers and crews failed to screen sick passengers despite the tasks being part of national protocol.

“The Inspector-General noted that, if agriculture had administered the Traveller with Illness Checklist in the way intended, passenger disembarkation could have been appropriately managed to minimise the human health risk associated with the persons onboard,” the report said. “This was a crucial error.”

NSW Health had rated the Ruby Princess as “low risk”, but had the Acute Respiratory Diseases log been viewed and the spike in flu-like illnesses identified, it would have been sufficient to change the risk rating of the vessel, the report said.

The report also stated there was miscommunication and poor understanding of respective roles of multiple agencies, which led biosecurity officers to assume that NSW Health would manage the health risk posed by the outbreak.

A separate report released last year found the NSW government was responsible for serious and inexcusable mistakes in the Ruby Princess cruise ship debacle. That report, from NSW’s Special Commission of Inquiry into the Ruby Princess and completed by Bret Walker, SC, made sweeping criticisms of NSW Health.

Not long before the onset of the COVID-19 pandemic, the federal health and agriculture departments had completed training on managing an infectious disease outbreak on-board a cruise ship.

“However, when a real event occurred only 10 months later, critical errors occurred in the same key areas,” the Inspector-General’s report said.

“This is very concerning, as it draws into question the value of the exercise or the commitment of relevant agencies to respond to the exercise outcomes.”

A new national draft policy about disease outbreaks on cruise ships was developed by December 2019, but is yet to be released. 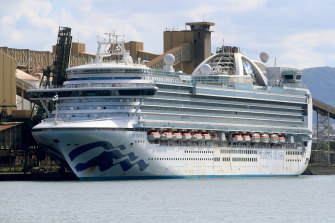 The Ruby Princess was linked to more than 650 cases of COVID-19 across the country.Credit:Sylvia Liber

The Inspector-General’s report said it was “perplexing” the updated policy was not made available to the Department of Agriculture before the COVID-19 pandemic affected Australia.

It said inadequate communication was a key factor in the Ruby Princess biosecurity failure and in late 2020 there was still confusion over whether state emergency management laws had practically overridden national biosecurity law.

The report includes 42 recommendations, including that the Department of Agriculture should work with health authorities to ensure that all officers have received appropriate training in assessing human health.

“I ordered this inquiry to ensure the department’s protocols were improved, which has formalised the co-ordination between the department and state agencies,” he said.