A classic rags-to-riches tale has turned sour for an Indian man who won big on his local lottery, as he has been so bombarded with demands for money from strangers that he regrets ever winning it at all.

The rickshaw driver known as Anoop, from the southern state of Kerala, scooped the jackpot of 250million rupees (£2.9m) in a state government lottery on September 18.

But the joy did not last long for Anoop, 32, his wife Maya, child and mother who are set to share in the windfall, the biggest prize ever given out by the state lottery.

He recently posted a video telling strangers to leave him and his family and stop hounding them for money. He said he even has to constantly move houses to escape the harassment.

As the cameras and media turned up at his house in Sreevaraham in Thiruvanathapuram to shine a spotlight on the unlikely winner, hordes of the hopeful chancers also emerged trying to get a slice of his winnings, Anoop complains.

‘I wish I hadn’t won,’ he told the BBC wistfully over his multimillion rupee miracle. ‘The third prize may have been better.’ 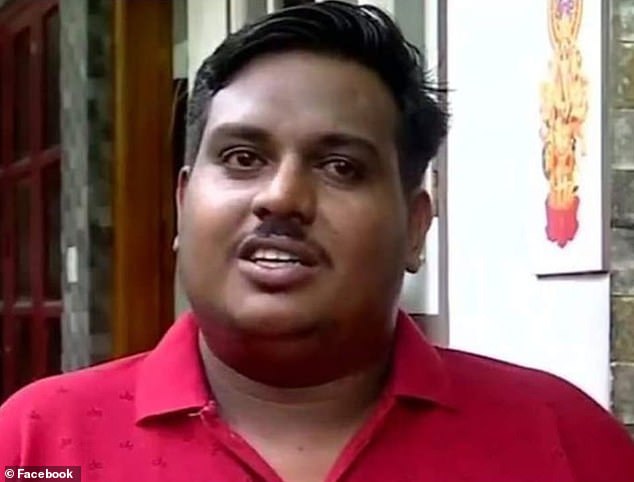 Thirty-two-year-old Anoop, a rickshaw driver from Kerala, was lucky enough to scoop the biggest ever jackpot in the state lottery’s history of nearly £3million 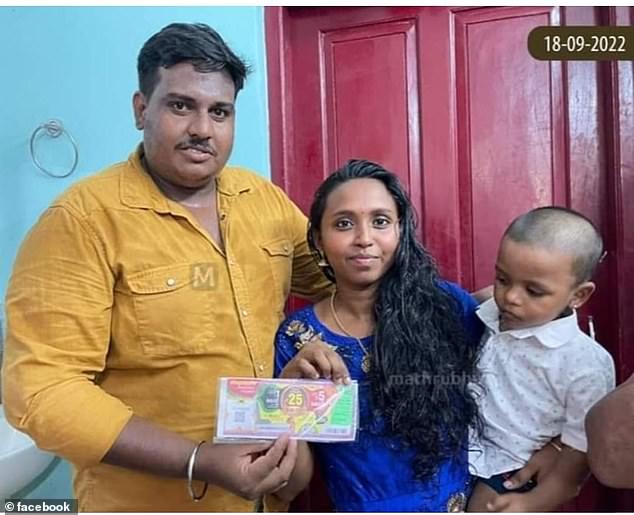 But the joy did not last long for Anoop, 32, his wife Maya, child and mother who are set to share in the windfall, the biggest prize ever given out by the state lottery

‘I was overjoyed when I won,’ Anoop recalled about the news of his victory in a recent video. ‘There were people and cameras at the house and we were happy.’

Anoop had been buying lottery tickets for years but had only won small prizes before.

Suddenly, after fulfilling his dream and winning the jackpot, the situation grew into an uncontrollable frenzy, with the media attention driving countless people to his door every morning.

‘I have lost all peace of mind and I can’t even reside in my own home as I am besieged with people who come calling to ask me to sort out various needs of theirs as I have won the first prize.

‘I now keep changing where I stay as I have lost all peace of mind that I enjoyed till I won the prize,’ he is quoted as saying.

‘I have to keep changing houses. I went and stayed in my sister’s house, but people searched that address out and came there. I came now as my child is unwell.

I have not even got the money. I now wish I had not got so much money, maybe I should have won the third prize,’ Anoop says, his child in his hands.

While he is speaking to the camera, he points out people knocking on his door.

The rickshaw driver, who was set to move to Malaysia to work as a chef just the day before he discovered his stroke of luck, has not even received a single rupee so far but this has not discouraged the multitudes.

The Indian man continued: ‘I can’t leave the house, I can’t go anywhere. My child is ill and I can’t take him to the doctor.’

‘All I can tell everyone is that I haven’t gotten any money yet. No-one seems to understand my problem, no matter how many times I say it.’

Anoop’s wife Maya said that people had queued up from various places in Kerala and beyond, including a few people from Tamil Nadu. ‘They just come and demand money, we don’t know what to say. Anoop is not even able to return home.’

He bought the ticket on September 17, the day before he was due to jet off to Malaysia to take up a job as a chef, having raided his son’s piggy bank to pay for it. 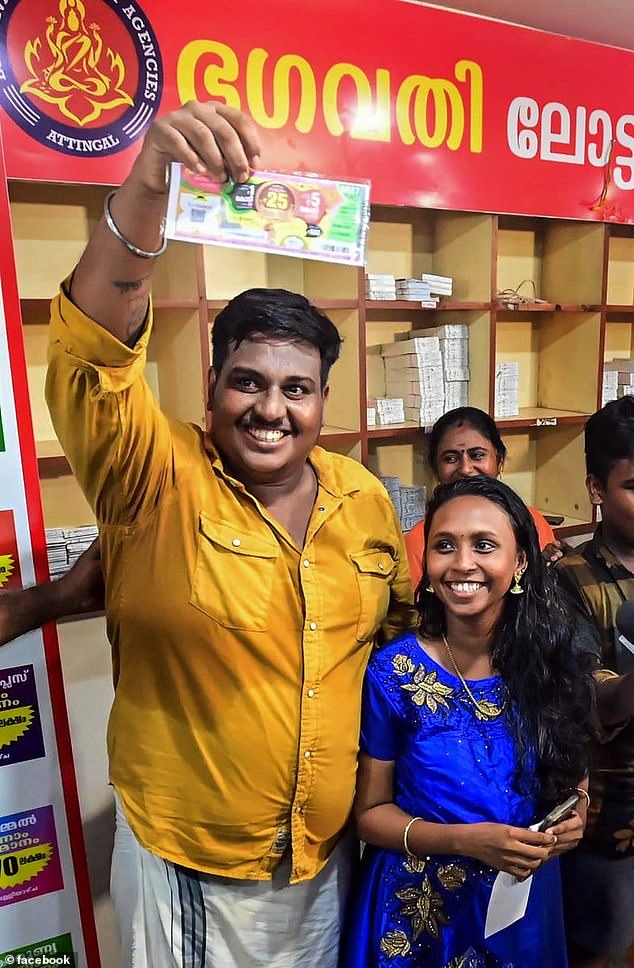 As the cameras and reporters turned up at his house in Sreevaraham in Thiruvanathapuram to shine a spotlight on the unlikely winner, hordes of the hopeful chancers also emerged trying to get a slice of his winnings

Since the winning, Anoop said he has been staying with relatives to avoid all the unwanted attention.

Even his neighbours and former friends are unhappy with him, as his newfound wealth has disrupted the peace and tranquility of the village.

‘My neighbours are angry as many people who come looking for me hang around in the neighbourhood.

‘Even when wearing a mask, people crowd around me knowing I am the winner. All my peace of mind has disappeared,’

The state government has said that it will provide a day’s training in financial management for Anoop once he finally receives the 150million rupees after tax.

It is unclear if the training will instruct him on how to deal with hopeful strangers demanding a slice of his winnings.

Anoop announced after winning the jackpot that he planned to open a restaurant.

The average annual salary in India is around £4,500, meaning that a £3million jackpot in India would be valued at around £25million if converted to the British economy.

While few people in the UK would turn their noses up at a £25million windfall, the largest jackpot ever won by a Brit was a whopping £195million, in July this year.