A father-of-two graphics designer launched a one-man war to stop speeders by setting up a fake speed camera outside his house.

Alexander Booth, 48, was sick of the frequent accidents on the busy stretch of B2149 outside his home in Bedhampton, Havant.

He decided to pull a ‘prank with a serious message’ by putting up a fake speed camera he bought on eBay for £95.

The fake camera – made from wood, metal and a drainpipe – looked like a GATSO speed camera and was fixed on to a fence post with a bracket and a cable tie.

Mr Booth donned a hi-viz jacket to put up the camera in the hopes that his learner-driver son wouldn’t have to contend with ‘boy racers’ roaring around the corner in the 30mph zone.

But when a Facebook post revealed the camera was just a prank within hours of it going up – Mr Booth launched a clever social media ‘disinformation campaign’ to convince locals that it was real. 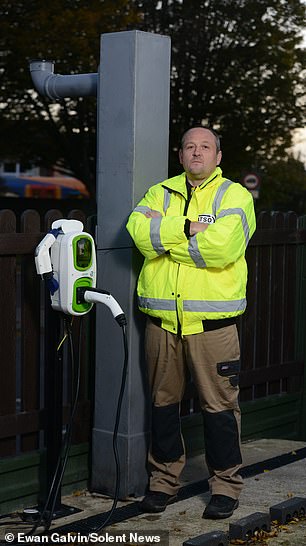 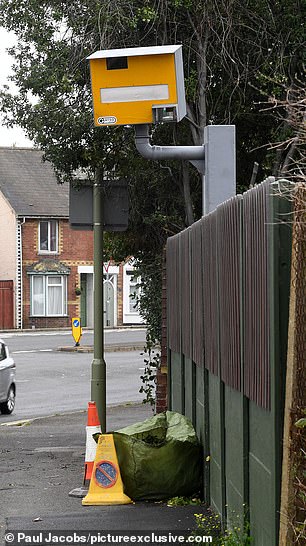 Alexander Booth, 48, (left) was sick of the frequent accidents on the busy stretch of B2149 outside his home in Bedhampton, Havant, so set up a fake speed camera (right) outside his house 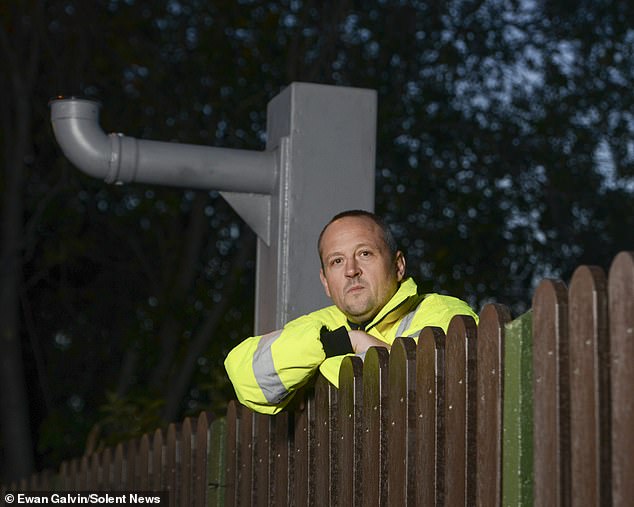 ‘My son was learning to drive and he was really struggling to pull out,’ he told MailOnline. ‘That’s what tipped me over the edge.

‘I had bought a fake speed camera on eBay for £95 seven years ago with the same idea, but I hadn’t put it up because I’m terrible at DIY. It just sat there gathering dust.

‘But this week I was cleaning out the garage and with my son struggling, I decided to go for it.

‘I used my graphics skills to touch up the paint and I printed some Gatso stickers for the side. My 75-year-old dad helped me as he’s good at DIY. 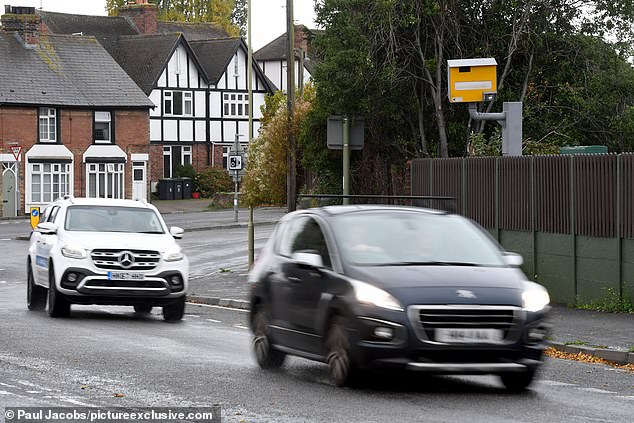 The fake camera, made from wood, looked like a GATSO speed camera and had been affixed on to a fence post with a cable tie 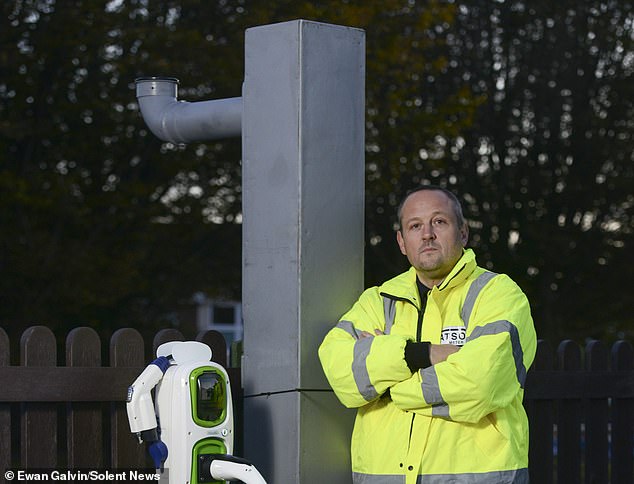 ‘I put on a hi-viz jacket with Gatso on it, so I looked official, and went for it. A police car cruised by and gave me a good look but it didn’t stop.

‘It worked like a dream at first,’ he added. ‘The traffic calmed down and all the boy racers started thinking twice before they came roaring round the corner.

‘But within a few hours, someone put a post on Facebook exposing it as a prank. It was then that I knew I had to fight back and start a disinformation campaign.’

Mr Booth, who is a purple belt in Brazilian jiu-jitsu and an electric car enthusiast, asked his friends and neighbours to take to Facebook and claim to have been flashed by the camera.

‘We were trying to spread the fake news that it was real,’ he said. ‘It was really good fun actually, winding people up.

‘Some people started to get really angry. I didn’t realise how angry people get about speed cameras. They were threatening to burn it down and yank it over with a rope.’ 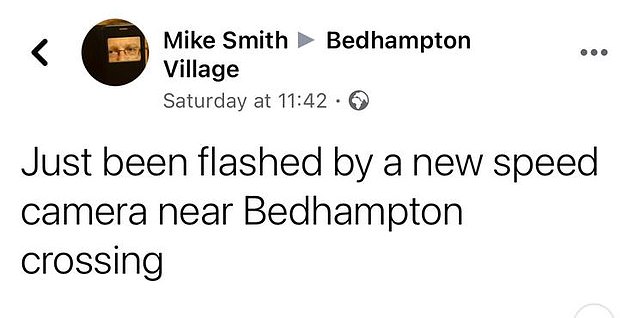 When a Facebook post revealed the camera was just a prank within hours of it going up – Mr Booth launched a clever social media ‘disinformation campaign’ to convince locals that it was real. Pictured: Someone claiming to have been flashed by the fake camera on Facebook

The next day, the father-of-two went surfing in Bracklesham Bay near Chichester and ‘had a few drinks’ afterwards.

‘When I got back I was a bit merry and I decided it was time to ramp up the misinformation,’ he said.

‘I started posting on Facebook saying it was disgusting how people are claiming the camera was fake, just to catch people and get them tickets.

‘Friends of mine joined in. That made people go absolutely mental.

‘Then I posted a picture of myself in the high-viz jacket, saying “the authorities are investigating”. The next night someone came and nicked it.’

Mr Booth, who is keen on amateur dramatics, said he was in two minds about the identity of the thief.

‘Either it was a nutter who wanted to carry on speeding,’ he said, ‘which would be weird as if they knew it was fake they’d just carry on anyway.

‘The other option is that someone stole it to put it up outside their own house, because it worked a treat.’

Some members of the local community were jubilant but others were devastated, he added.

‘Some people were as sad as me and they are the sensible ones,’ he said. ‘If it had stayed up, it might have saved lives.’ 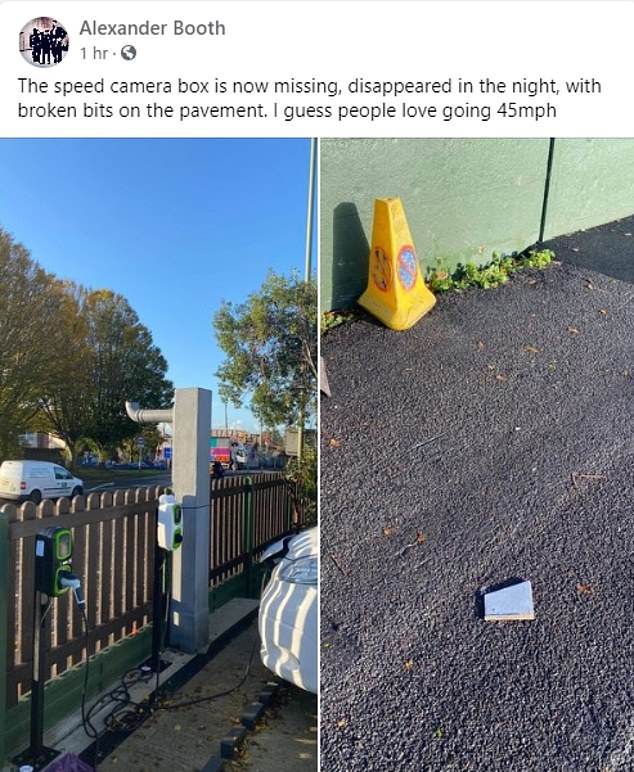 It appeared on Saturday on New Road in Bedhampton, Havant in Hampshire in a 30mph zone. But it had disappeared this morning according to a post on a local Facebook group which showed pictures of the drain pipe with nothing affixed to the top of it

Revealing on Facebook that the camera was gone, Mr Booth wrote: ‘The speed camera box is now missing, disappeared in the night, with broken bits on the pavement. I guess people love going 45mph.’

Sealant had been used and painted – making it look like it had been welded – and plastic drain pipe was also used. 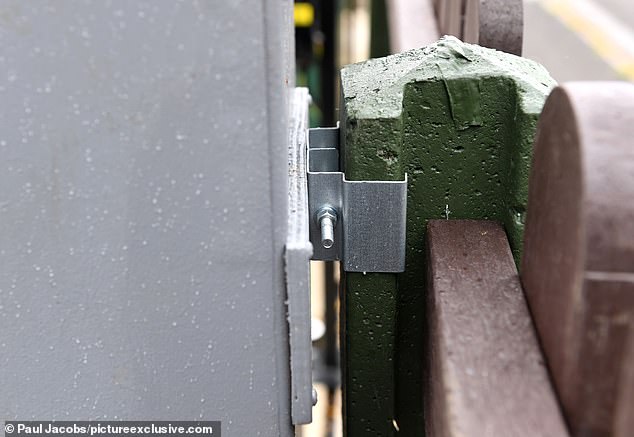 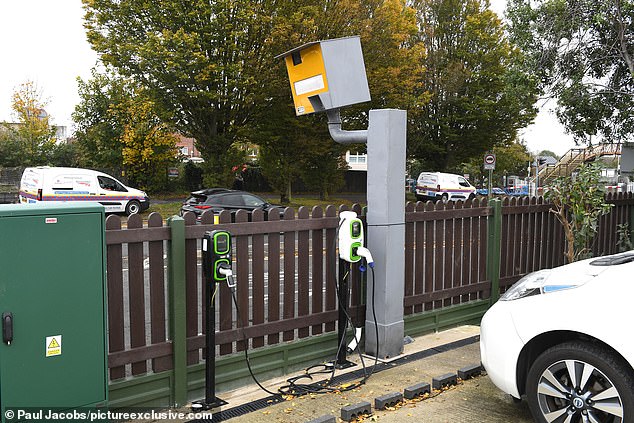 Its design was very similar to a genuine one, but on close inspection, you could see it had been made of wood and fixed in place with a bracket onto a fence post and a cable tie

The bushes had also been cut back, so the fake camera would be more visible to oncoming vehicles.

Many people stopped their cars to get out and have a look as the word quickly spread on social media that a new speed camera had appeared on the road.

While it is not illegal for someone to install a fake speed camera on their land, doing so can still put them at risk of civil action if someone claims to be distracted by it.