Parents of boy, three, who is buried in a churchyard slam plans to convert historic 12th-century church into a luxury home because his grave would end up in the owner’s garden

The parents of a little boy buried in a churchyard have blasted plans to convert a historic 12th-century church into a luxury home – as his grave would end up in a family’s garden.

An unholy row has broken out over proposals to develop St Andrew’s Church into a residential property in the quaint hamlet of Wolferlow, Herefordshire.

Ian Edwards died four days before Christmas 1984 aged just three-years-old after a chest tumour and is buried in a plot right alongside the picturesque Grade II-listed building.

His father Colin Edwards, 71, is now embroiled in a bitter row with council bosses over ‘immoral’ plans to transform the sacred place into a country dwelling.

Colin still lives and works on a farm within sight of the church and has maintained the church grounds in the village for the past 35 years.

He and his furious former wife Laura Edwards, 65, are also angry after Ian’s grave was fenced off ahead of the proposed redevelopment.

The pair fear that once the church is converted into a property they will be overlooked by its residents while laying flowers at Ian’s graveside.

They have also criticised the local CofE diocese after they sold the property without consulting the relatives of the deceased buried in the churchyard. 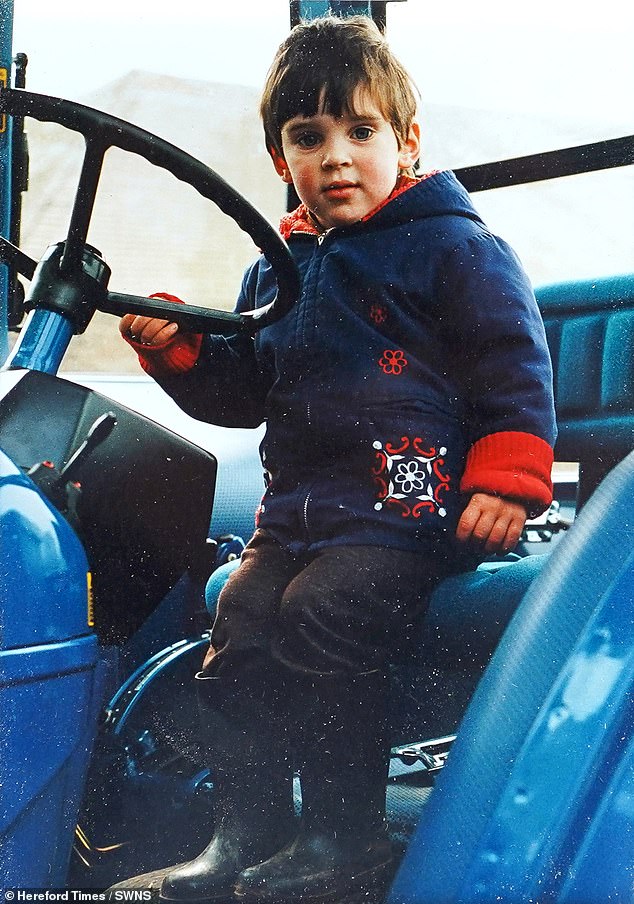 Ian Edwards died four days before Christmas 1984 aged just three-years-old and is buried in a plot right alongside the picturesque Grade II-listed building in Wolferlow, Herefordshire 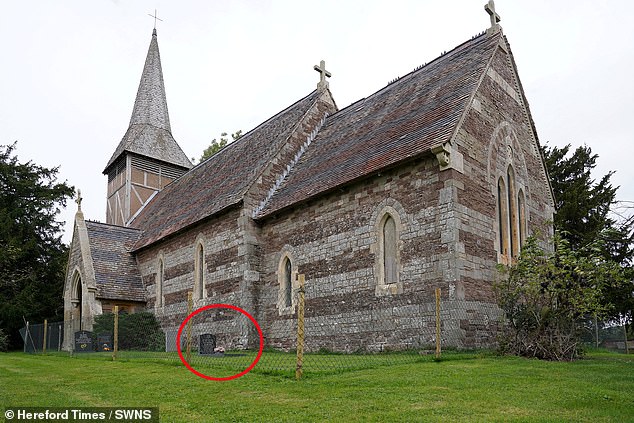 An unholy row has broken out over proposals to develop St Andrew’s Church into a residential property in the quaint hamlet of Wolferlow, Herefordshire. Above: Ian Edwards’ grave highlighted

Colin said he even tried to buy the church himself ‘to just leave it as it is’ but was outbid by property developers and worries it could now become a holiday home.

He said: ‘It’s a house of God, not a holiday let. The dead should be given some dignity.

‘You wouldn’t knock Westminster Abbey down to convert it into flats so why have the church allowed this to happen?

‘I have mown the grass and trimmed the hedges for over 30 years. Who will look after the graves once it’s developed?

‘The fact it has been done without any consultation with relatives is also deeply concerning.

‘The church has been part of this hamlet for generations and I’m surprised the diocese have just decided to part with it for the sake of some money.

‘It is a sacred place and now my son’s grave and other relatives of mine are going to end up in somebody’s front garden.

‘It will remain a working churchyard so I’m also not sure why the occupants would want to watch a funeral taking place outside their window anyway.

Laura, 65, was incandescent with rage when she discovered her son’s plot had been fenced off ahead of the proposed redevelopment upon a recent visit.

She said she was devastated when she went to lay some flowers to find her son’s headstone inaccessible and lying behind a chain-link fence.

Laura said: ‘I just find the whole thing completely immoral. When I go to my son’s grave I don’t want to have a family watching TV looking out their windows at me.

‘It’s a time for quiet reflection and you want your relatives to be in a peaceful place. I was devastated when I went up there and found it all fenced off.

‘There has never been any signs up so why all of a sudden are they fencing it off for safety reasons?

‘This could quite easily be turned into a holiday home so there could be all sorts of people there while I’m trying to grieve my son. 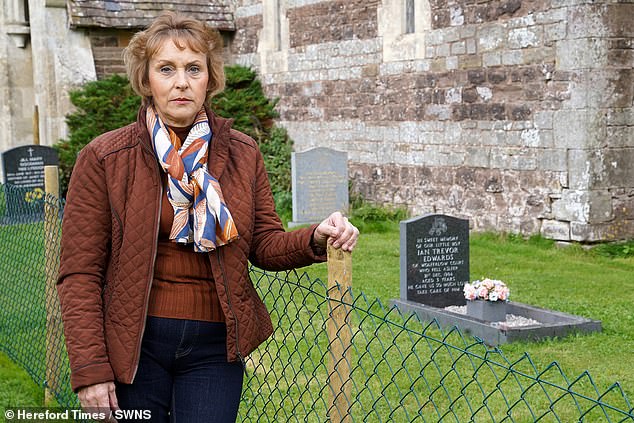 ‘His grave is right up against the church window, it just seems completely disrespectful.

‘They have sold it to the highest bidders without any care for the relatives of the deceased there.

‘Because my son’s grave is under 50 years old it cannot be disturbed but their plans include digging up older graves for sewage and garages.

‘It just doesn’t seem right to me. It has all been done without any communication either, my husband offered to buy it so he could continue to maintain it.

‘He has maintained the grounds there for 35 years by himself. We have other family members there who died.’

Ian’s uncle and godfather, Mike Smith, said he was only aware of plans to convert the 12th-century church when he read about it in a local newspaper.

He said: ‘The church hasn’t consulted living relatives of those buried here about what they propose to do. 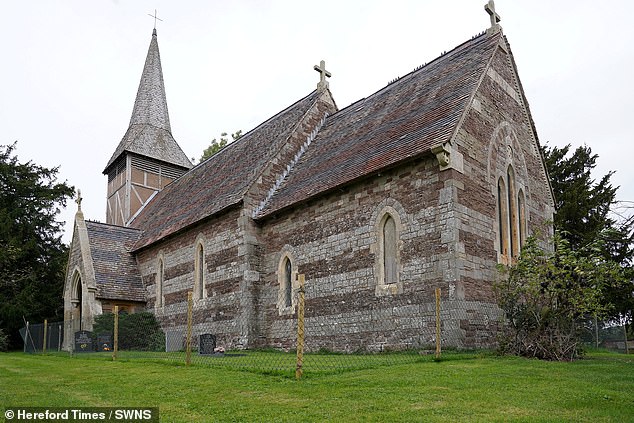 The last service was held in St Andrew’s Church (above) in 2003 and it was formally closed in 2006, although several burials have since been held in the grounds 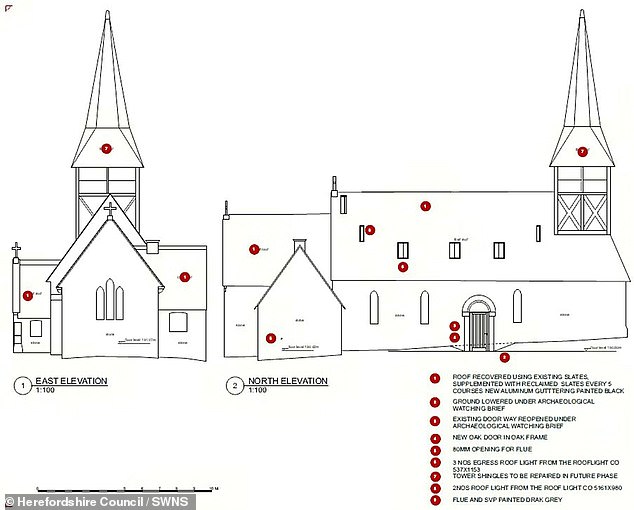 The last service was held in the church in 2003 and it was formally closed in 2006, although several burials have since been held in the grounds.

The Diocese of Hereford said the grave and three others have recently been fenced off due to the danger of falling masonry from the deteriorating building.

Colin said this too was done without consultation, even though others affected would also wish to go on tending graves of loved ones.

The planning application shows a C-shaped portion of the church grounds, excluding the graves, forming part of the new property, traversed by the existing public right of way.

Consultation for the plans closed on Monday and a decision on whether to approve them is due to be made later this month.

The Diocese of Hereford confirmed that the sale, believed to be in the region of £75,000, would not go through without planning permission first being granted.

A spokesperson said: ‘Church Commissioners would require strict covenants as part of the sale to ensure the church building and churchyard are treated with respect, and that no monuments or memorials are disturbed.

‘The diocese had sought alternatives to selling with the wider community, but these had been unsuccessful.’

They also apologised for the distress caused by the some of the graves currently being inaccessible, adding: ‘We are working with the insurer’s surveyor to seek a way forward that will allow access to the graves while still ensuring visitors’ safety.’

Church representatives have offered to meet the Edwards in an attempt to quell their concerns.

Parish church council treasurer Chris Evans said they would retain responsibility for part of the churchyard, including the graves.

He said: ‘We still look after the grounds and will continue to do so once they are developed.

Parish councillor for Wolferlow Stephen Tompkins added: ‘I welcome any work to be done to preserve what is a crumbling building and an obvious deteriorating asset.’