Firefighters are tackling a huge blaze tearing through an industrial building in Newhaven.

Huge plumes of thick black smoke billowed from the unit and nearby residents are being urged to keep doors and windows closed.

Witnesses have reported a ‘big explosion’ in the building – which is just yards away from the port.

East Sussex Fire and Rescue Service said 12 fire engines were at the scene in Beach Road. There were no reports of injuries. 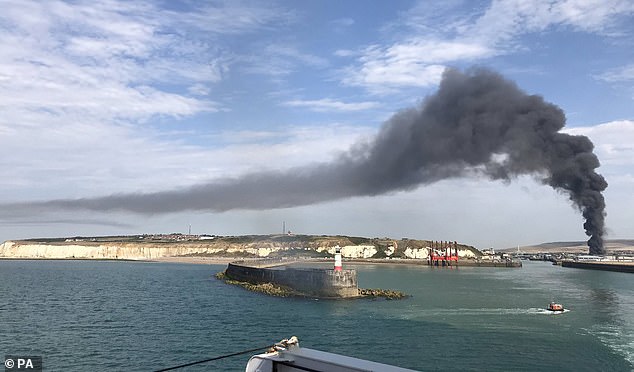 Onlooker Thea Pitcher – who shared footage of the smoke – said: ‘There was a big explosion near the Port in Newhaven ten minutes ago.’

An East Sussex Fire and Rescue Service spokesperson said: ‘We have 12 fire engines at the incident in Newhaven. The fire is affecting an industrial building. No reports of injuries. Please avoid the area.’

They then added: ‘Please avoid the area and keep doors and windows closed if you in Newhaven. We are dealing with a serious fire at an industrial building.’

Sussex Police wrote on Twitter: ‘Our colleagues are dealing with a large fire in Newhaven and recommending that doors and windows are kept closed if you live in the area and avoid if you’re planning on visiting.

‘We know the weather’s hot, but the smoke is very unpleasant and may affect you.’