People who become severely ill with coronavirus remain at heightened risk of death from complications linked to the virus even months after being cleared of the pathogen.

The warning from infectious diseases physicians comes as the state's Department of Health and Human Services confirmed a Victorian had died from coronavirus complications, despite having been cleared of the virus. 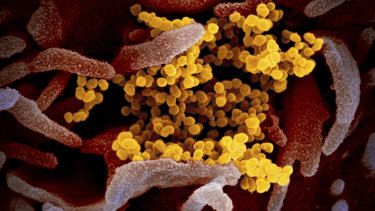 An electron microscope image shows the SARS-CoV-2 coronavirus (yellow) emerging from the surface of cells (pink) cultured in a US National Institutes of Health lab.Credit:AP

Health authorities reported the death on Monday morning and Premier Daniel Andrews later told a press conference that the woman who died was in her 70s and is believed to have died from coronavirus induced damage to her lungs.

She was diagnosed in July and deemed to have recovered from the virus. The coroner is investigating her death.

"If you have a major infection you have increased death rates for about six months after the event," Infectious diseases physician Peter Collignon said.

"That's because even if you get over the actual event it can damage your heart, your kidneys, your lungs and even make you more likely to have heart attacks and strokes because it changes the inflammatory parameters in your body and, very specifically, it lowers the ability of your white cells to fight off other infections as well," Professor Collignon said.

The microbiologist said medical complications following a serious illness were not unique to coronavirus. Other severe infectious, such as golden staph, particularly once it enters the bloodstream, had been linked to higher deaths rates and ongoing disability.

Staphylococcus is a common bacteria which lives on the skin and in the nose which can cause mild to severe and potentially fatal infections after entering the body through a cut to the skin.

"If you look at data from anybody who has a severe infection, so golden staph if that gets into your blood, influenza, COVID … cases where you're sick enough to get into hospital or require intensive care, you tend to have a higher death rate for your age and other complications for the next six months at least," Professor Collignon said.

"A large number have ongoing disability months later, even though the infection itself is gone. Then it will usually goes back to where you were previously."

Australian National University infectious diseases physician Sanjaya Senanayake, who has studied the long-term effects of golden staph and sepsis on the body, said it was not uncommon with any serious infection to see a higher death rate down the track.

Sepsis is caused when an immune response to infection starts to damage tissues and organs. Without fast treatment it can lead to death and survivors will often have ongoing health issues.

"If you follow people six months or even a year down the track, there is an increased death rate even though people have got over the initial illness," he said.

"Part of it could be that their underlying conditions have been exacerbated and they are now much worse and there is an inflammatory response which persists after the infections gone which can affect blood clotting and various other things."

With coronavirus a relatively new virus, Professor Senanayake said much was still being learned about its lasting and lingering effects on the body.

"With COVID, it is probably to soon to say, it may not be as bad as other serious infectious, or it may be similar, only time will tell," he said. "

"We are looking at these 'long-haulers with long COVID' who at least for a good four to six weeks after a good proportion of people are getting all these various symptoms, so various pains in different muscles and joints, feeling tired, shortness of breath, not being able to think clearly all those things are happening."

Professor Senanayake said with other similar viruses, such as severe acute respiratory syndrome, more commonly known as SARS, the symptoms seemed to settle down within a few months after the acute episode.

But he noted what was striking about coronavirus was that doctors were seeing a heightened level of "post infective symptomatology," not documented in people struck down by influenza.

"With COVID we will just have to see," he said. "There are a lot of people who are flippant about it or think COVID is just like the flu, but it is not like the flu.

"Even in the short-term, we are seeing young people who have to go off work because they are just not well enough to work, so there is an economic issue. We also think there might be some issues with fibrosis, or scarring in the lungs, we are yet to see whether that will have long-term impact on people."

The state recorded no new cases, for the 31st day in a row, as Melburnians were allowed this morning to begin a gradual return to the office.