Oslo: European countries are moving to curb travel as fears of a second wave of coronavirus sweep across the continent.

Norway announced on Thursday it will impose a 10-day quarantine for all travellers from France, Switzerland and the Czech Republic, while Austria advised its citizens against all non-essential travel to mainland Spain. 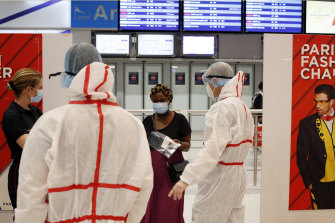 A passenger is tested upon arrival at Roissy Charles de Gaulle airport in Paris. Travellers entering France from 16 countries where the coronavirus is circulating widely are having to undergo tests upon arrival at French airports. Even so, France has just been added to a quarantine list for Norway.Credit:AP

Norway will also reimpose quarantine for people travelling from Monaco and from certain regions in neighbouring Sweden.

The Nordic country, which is not a member of the European Union but belongs to the passport-free Schengen travel zone, had some of the strictest travel restrictions in Europe in the early phase of the pandemic.

Norwegian authorities are also discussing whether to update guidelines on the wearing of face masks in crowded spaces.

The country has already closed its ports to large cruise ships after an outbreak aboard the MS Roald Amundsen.

Other countries in Europe are also considering what measures to impose to prevent a new wave of infections.

Germany on Thursday announced mandatory tests for travellers returning from high-risk regions as coronavirus cases breached the 1000-a-day threshold for the first time since May.

The move was in part mirrored across the border in Austria, where all travellers returning from Spain will now need to present a negative test. The move by Austria does not include Spain's Balearic and Canary islands.

Even so, the testing requirements announced by Germany and Austria are the latest blow to Spain's tourism-dependent economy after Britain and Switzerland warned their citizens against taking summer holidays in Spain.

The spread of the disease in Spain slowed after the government imposed one of the strictest lockdowns in Europe. However, new cases have started rising again and hit a post-lockdown record of 1772 new cases on Wednesday.

Austria has weathered the coronavirus crisis quite well so far, but saw infections increase with the summer holiday season. The government there is concerned summer travellers will bring the infection home with them.

Austria has already imposed tight testing requirements for arrivals from the Balkans after it saw an increase in infections among people returning from the region. It now has travel warnings in place for Albania, Bosnia, Kosovo, Montenegro, North Macedonia and Serbia, as well as for European Union member states Bulgaria and Romania.

Despite imposing the longest, strictest lockdown in south-east Asia earlier this year, coronavirus cases in the Philippines have now surged to almost 120,000, eclipsing Indonesia to become the region's biggest outbreak.

The country has re-imposed a second lockdown on its capital and nearby areas to curb infection spread, even as the economy suffered its deepest contraction on record, shrinking 16.5 per cent in the second quarter from a year ago.

In the Philippines, the virus' resurgence has been fuelled by testing gaffes and failures in quarantine protocol in the face of over 100,000 overseas workers arriving home after losing their jobs in other countries.