A FUGITIVE team is searching for the parents of an alleged school shooter.

It comes on the same day that a Michigan prosecutor filed four counts of involuntary manslaughter charges against each of Ethan Crumbley's parents. 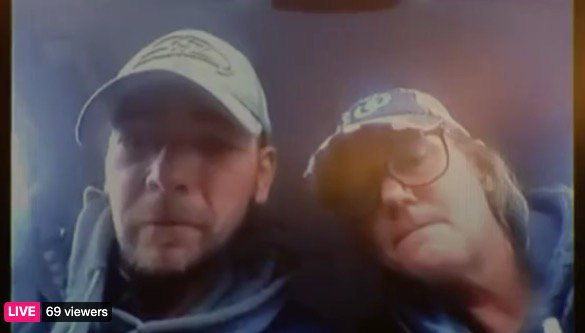 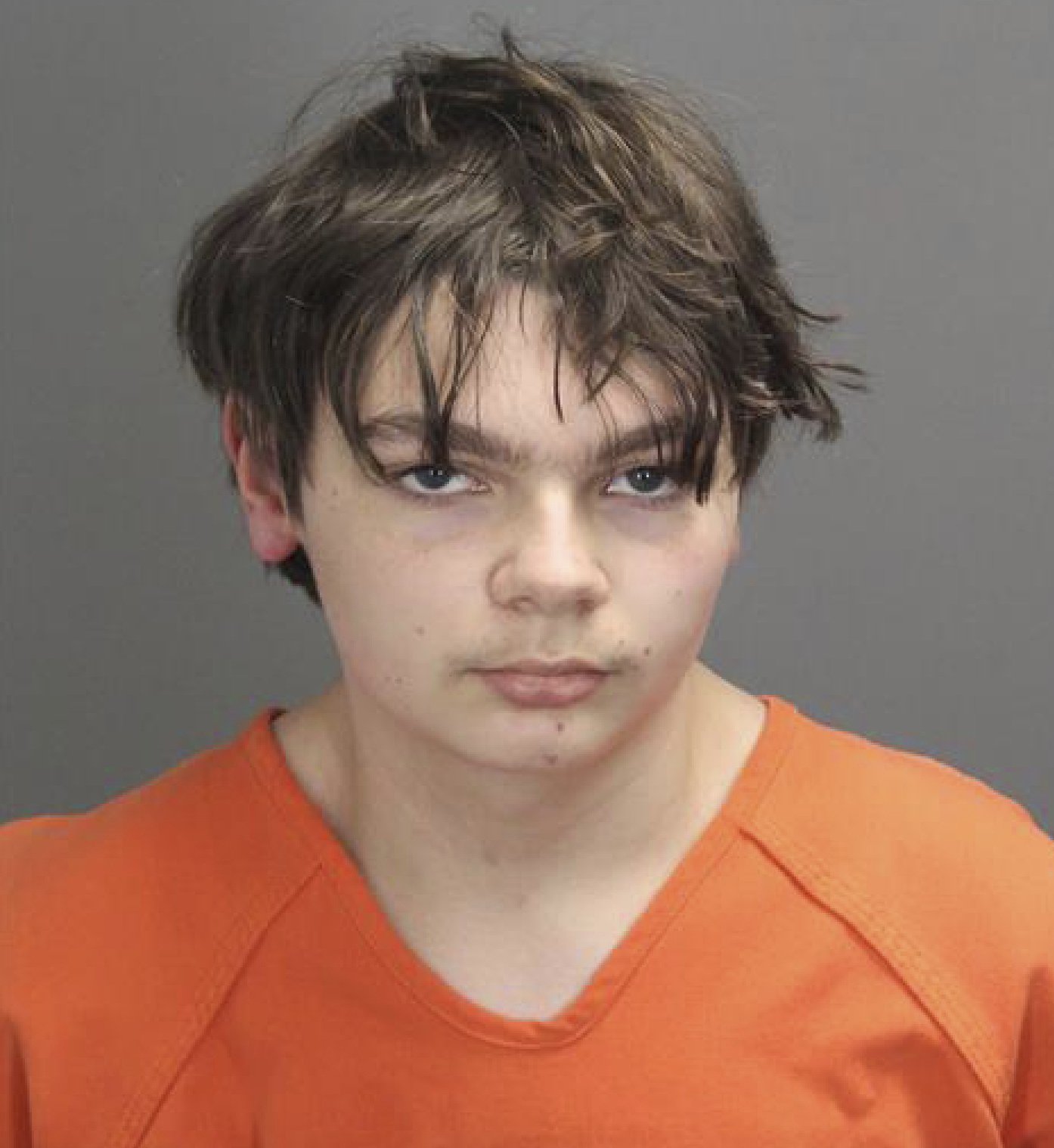 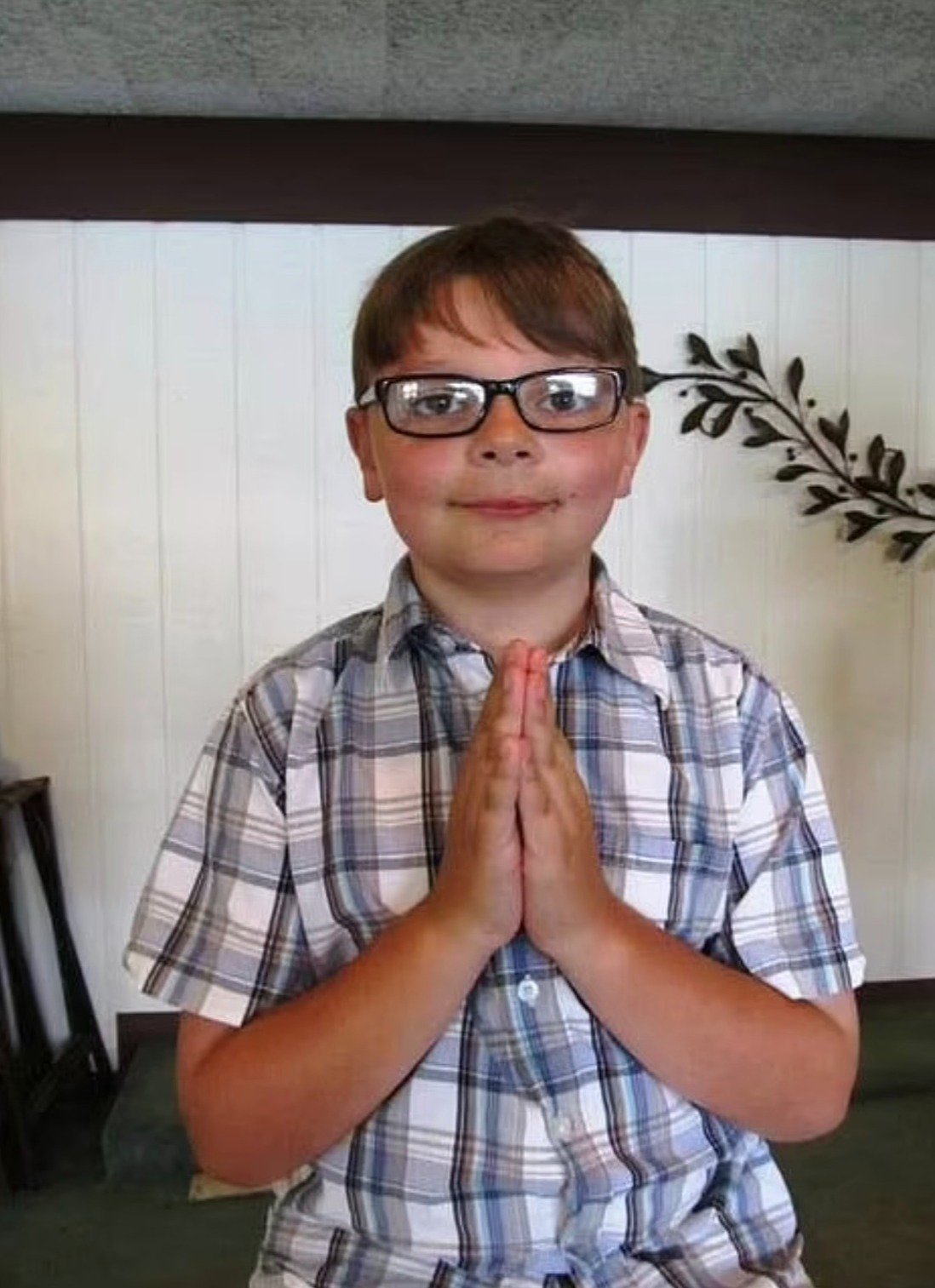 Crumbley, a sophomore at Oxford High School, will be charged with one count of terrorism causing death and four counts of first-degree murder.

He also faces seven counts of assault with intent to murder and 12 counts of possession of a firearm in the commission of a felony.

A fugitive team is now reportedly hunting for the parents after they did not surrender at 2pm, as they were scheduled to. They were also set to be arraigned at 4pm.

Sheriff Michael Bouchard said: "If they think they're gonna get away, they're not."

The FBI and US Marshals are assisting with the search.

The Crumbley family owns a 2021 white Kia Seltos with the license plate DQG5203, according to Michigan Secretary of State records.

“Their attorney had assured us that if a decision was made to charge them, she would produce them for arrest,” Oakland County Undersheriff Mike McCabe.

Prior to the filing, prosecutor Karen McDonald said: "With the right of owning a gun comes responsibility and the responsibility of a gun owner is to secure that weapon and to keep it out of the hands of somebody who could kill people.

"We can provide all the training and put up metal detectors and try to flag behaviors that are concerning in children.

"But at the end of the day, if we don’t make gun owners responsible for their possession, which most people who own guns do and are in favor of, we all should be responsible.

Deputies rushed to the school around lunchtime and arrested the suspect in a hallway within minutes.

He put his hands in the air as deputies approached, Oakland County Sheriff Michael Bouchard said late Tuesday at a news conference.

Oakland County Sheriff Bouchard said the suspect came out of the bathroom armed with a 9MM semi-automatic handgun, fired around 15-20 shots in the south end of the school building and acted alone.

The sheriff later told reporters that the boy’s parents had been summoned to the school before the violence. Bouchard wouldn’t discuss details of the behavior school officials were concerned about.

“There is nothing that he could have faced that would warrant senseless, absolutely brutal violence on other kids,” he said.

A preliminary investigation shows that the weapon he is alleged to have used was purchased on November 26 by his father.

The students killed at the Oxford high school shooting have been identified as Tate Myre, 16, Hana St. Juliana, 14, and Madisyn Baldwin, 17.

At approximately 10am on Wednesday, Justin Shilling, 15, who was in critical condition after the shooting, passed away from his injuries.

On Wednesday afternoon, the alleged shooter appeared in court via video for his arraignment.

Crumbley, who was sporting a white face mask and glasses, was seated with his hands handcuffed in front of him and wearing what appeared to be an anti-suicide vest.

His parents Jennifer and James Crumbley, also attended the arraignment via video.

The alleged gunman only spoke when asked by the judge to state his name and whether he understood the charges against him.

During the court hearing, prosecutors revealed that investigators recovered a video of Crumbley recorded the night before where he discussed killing students.

Crumbley was denied bail and will remain behind bars, isolated from other adult inmates.

The 15-year-old faces life in prison if found guilty.

Crumbley is currently being held at a juvenile detention facility, where he has been placed on suicide watch – with someone checking on him every 15 minutes. He is set to be arraigned on Wednesday afternoon.

MacDonald called for better gun laws, saying: "If the incident yesterday with four children being murdered and multiple kids being injured is not enough to revisit our gun laws, I don't know what is."

Eight others, including a teacher, were injured in the shooting on Tuesday afternoon at the high school in Oxford, Michigan.

It emerged on Wednesday that had a deer's head dumped on its grounds and was covered in red paint just days before the shooting.

School administrators had posted two letters to parents on the school’s website in November, saying they were responding to rumors of a threat against the school following a bizarre vandalism incident.

Both the sheriff and undersheriff emphasized that Tuesday’s shooting was unrelated to the deer head or any earlier investigation by their office.

But according to a November 4 letter written by Principal Steve Wolf, someone threw a deer head into a courtyard from the school’s roof.

They also painted several windows on the roof with red acrylic paint and used the same paint on the concrete near the school building during the early morning hours.

Without specifically referencing that incident, a second post on November 12 assured: “there has been no threat to our building nor our students.”

But one concerned parent, Robin Redding, said her son, Treshan Bryant, is a 12th grader at the school but stayed home Tuesday.

Redding said her son had heard threats that there could be a shooting.

“This couldn’t be just random,” she said.

On Wednesday, Sheriff Bouchard said Crumbley and his parents met with school administrators the morning of the shooting due to concerns about the 15-year-old’s behavior the day before.

However, the sheriff said the school never contacted law enforcement about their concerns.

THREATS 'FOR A LONG TIME'

Bryant said he texted several younger cousins in the morning and they said they didn’t want to go to school, and he got a bad feeling.

He asked his mom if he could do his assignments online.

Bryant said he had heard vague threats “for a long time now” about plans for a shooting.

Tate Myre, 16, Hana St. Juliana, 14, and 17-year-old Madisyn Baldwin were on Tuesday named as the three victims of the shooting.

Tate was a "standout" football player and died from his injuries on the way to the hospital in the back of a patrol car.

Classmates said that he tried to disarm the shooter. 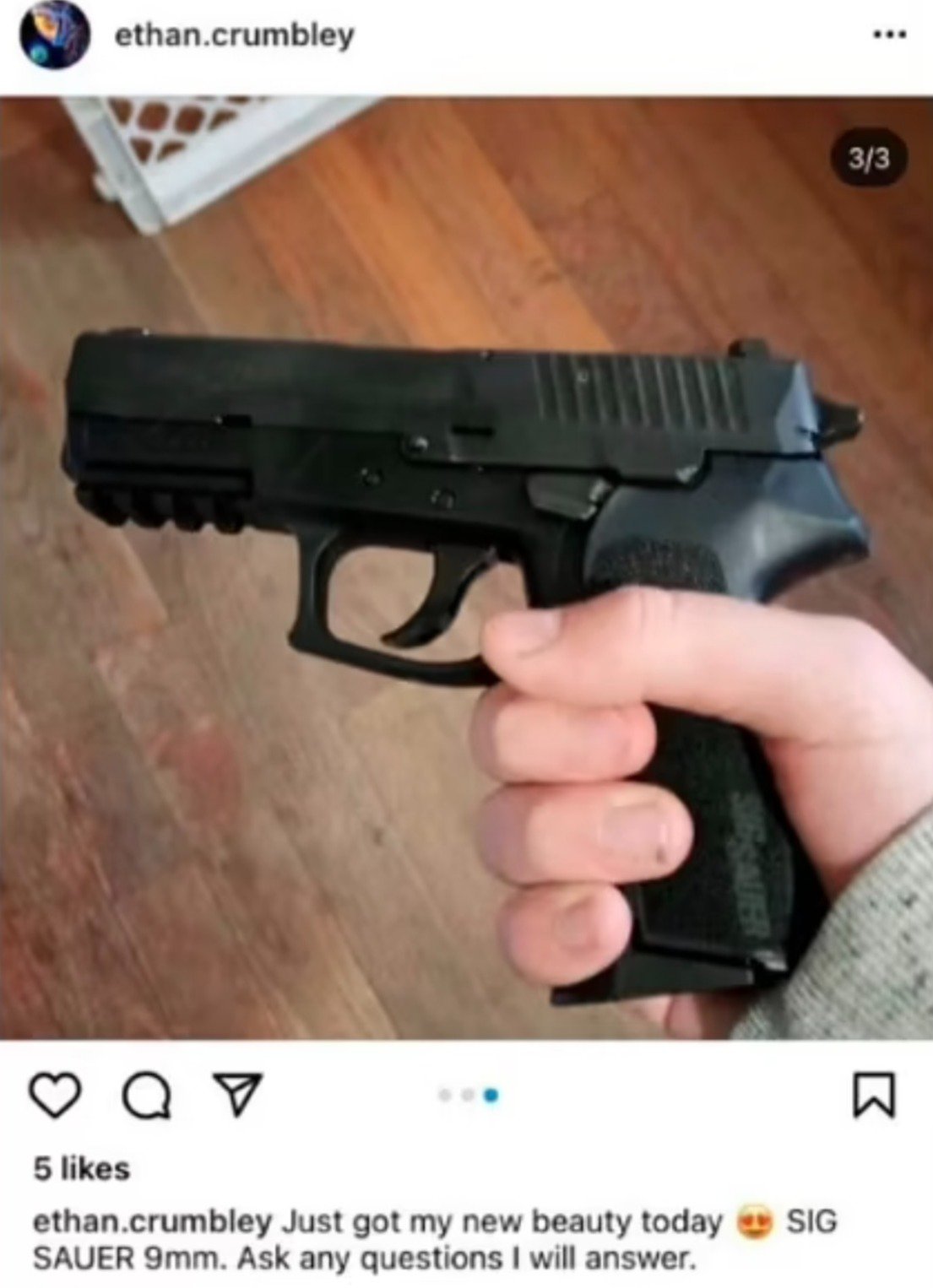 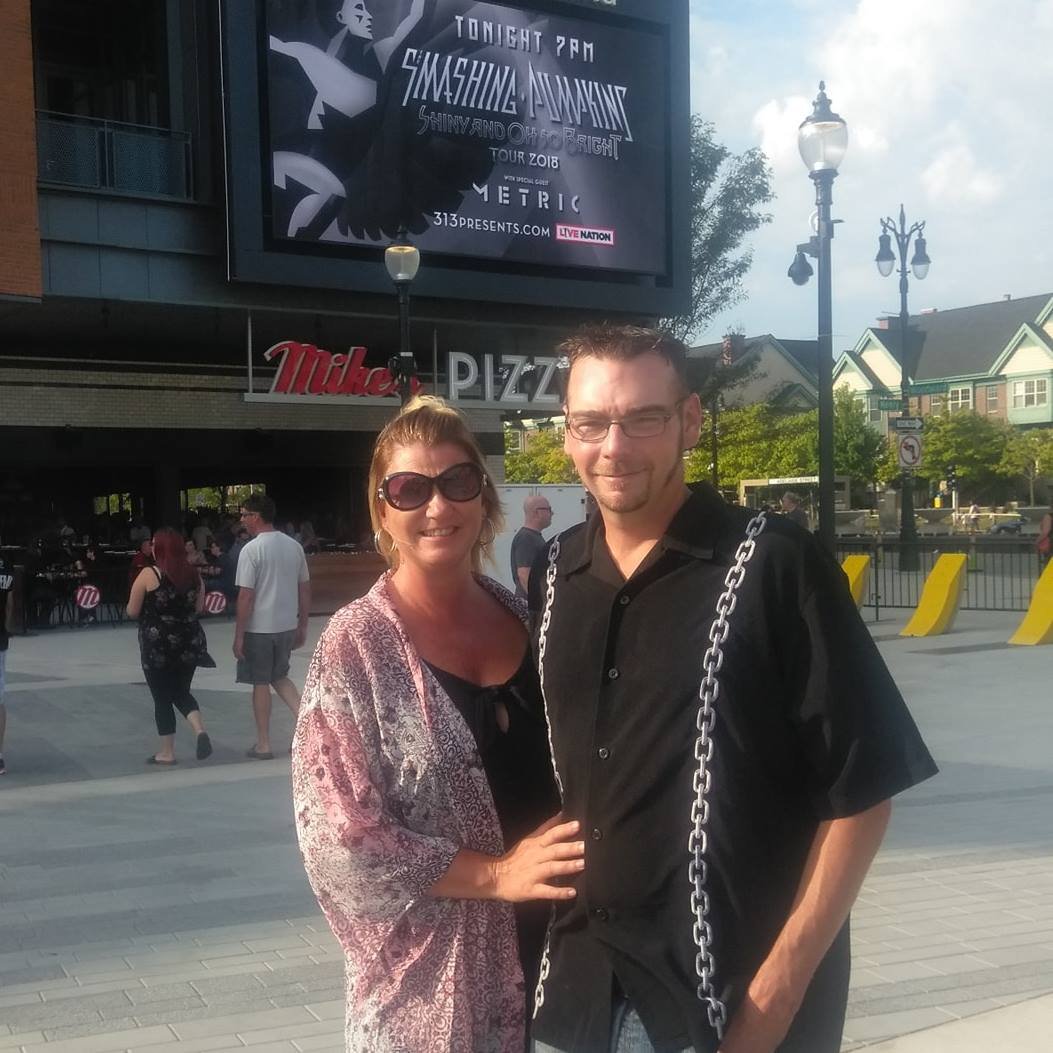