A female school pastoral carer who attacked a woman in a pub toilets and threatened to kill her was spared jail – because she was drunk.

Bobbyjane Boyne, 49, flew into a jealous rage and smashed Anne-Marie Szwed’s head against a sink before using a wall ‘as a weapon’.

She launched at Miss Szwed in the Oak Inn, Coventry, in the early hours of February 24 last year after she saw her talking to a man she knew. 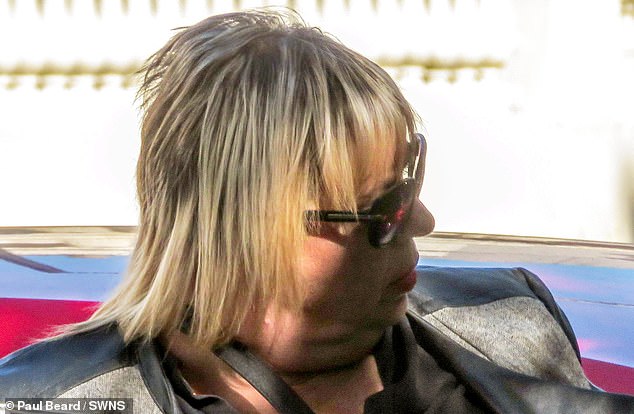 Female school pastoral carer Bobbyjane Boyne attacked a woman in toilets of the Oak Inn, in Coventry and threatened to kill her but was spared jail – because she was drunk

Boyne, of Coventry, was given a 12-month sentence, suspended for two years after she admitted actual bodily harm at Warwick Crown Court on Thursday.

She was also given a 7pm to 7am curfew for three months and ordered to do 150 hours of unpaid work.

Judge Andrew Lockhart QC spared her prison, saying Boyne would not have attacked Miss Szwed if she had not been ‘in drink’. 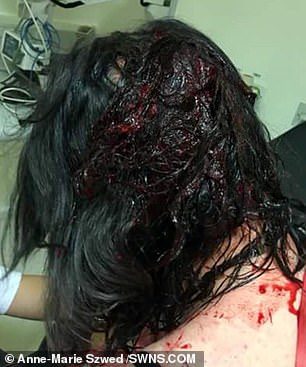 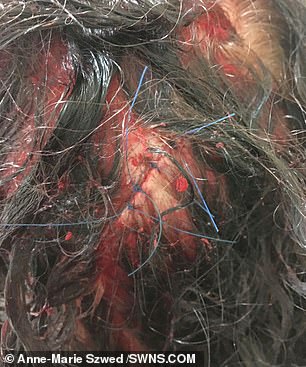 Boyne flew into a jealous rage and smashed Anne-Marie Szwed’s head against a sink before using a wall ‘as a weapon’. Ms Szwed suffered horrific injuries to the back of her head in the attack 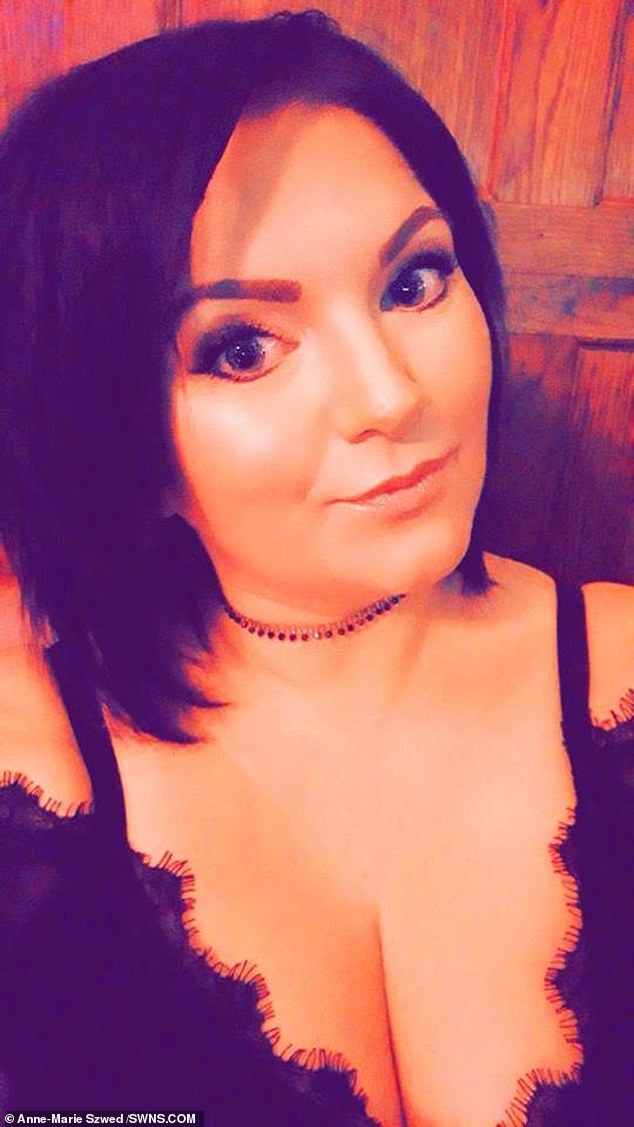 He told Boyne: ‘I take the view you have some form of alcohol problem.

‘Alcohol has been a feature of your life since, sadly, your husband died.

‘Jealousy arose, and you, in my view, formed a view that Miss Szwed had done something to you.

‘If you had not been in drink, you would not have done it, but you put your arm round her throat and smashed her head on the windowsill.

‘You then bashed her head on the basin.

‘There is no doubt in my mind you intended to hurt her – and you did. 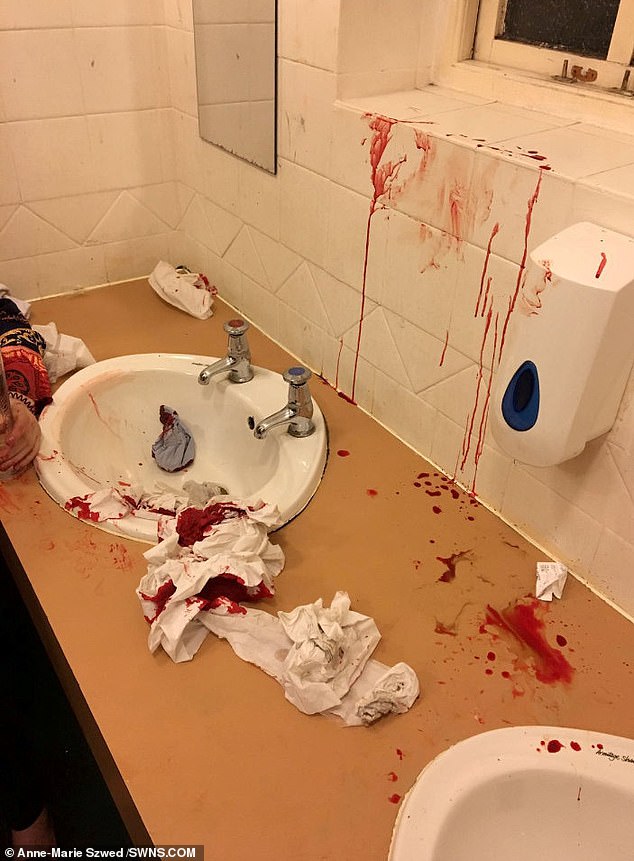 Boyne put her arm around Ms Szwed’s neck and smashed her head against a windowsill in the pub bathroom. She then bashed her head on the basin. Above: Blood-strewn tissues surround the sink 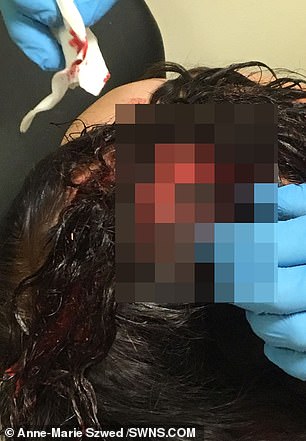 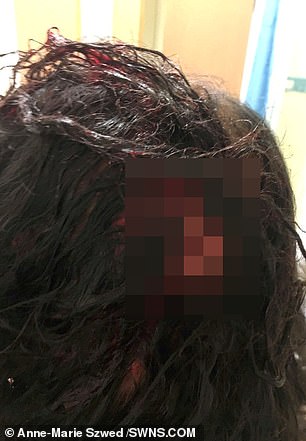 ‘She suffered a very large cut indeed to the top of her head. You used the wall as a weapon.

‘She came out from the toilet and said what had happened to her, but you denied any assault, which I find extraordinary, given the job you did.

‘You didn’t tell the truth in your defence case statement, and only told the truth today.

‘But it was an isolated incident, you were in a good job, and have lost your job and lost your home. A great deal has fallen away from your life.’

The court heard Ms Szwed had also lost her job as a result of time she had to take off sick following the attack.

Prosecutor Graeme Simpson said both women had been in a pub when Ms Szwed spoke to a man at the bar who was involved with Boyne. 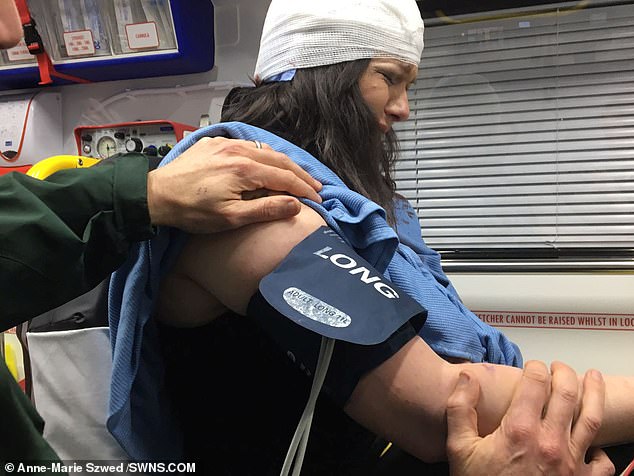 Ms Szwed lost her job because of the time she had to take off following the attack. Above: Ms Szwed in the ambulance after her ordeal 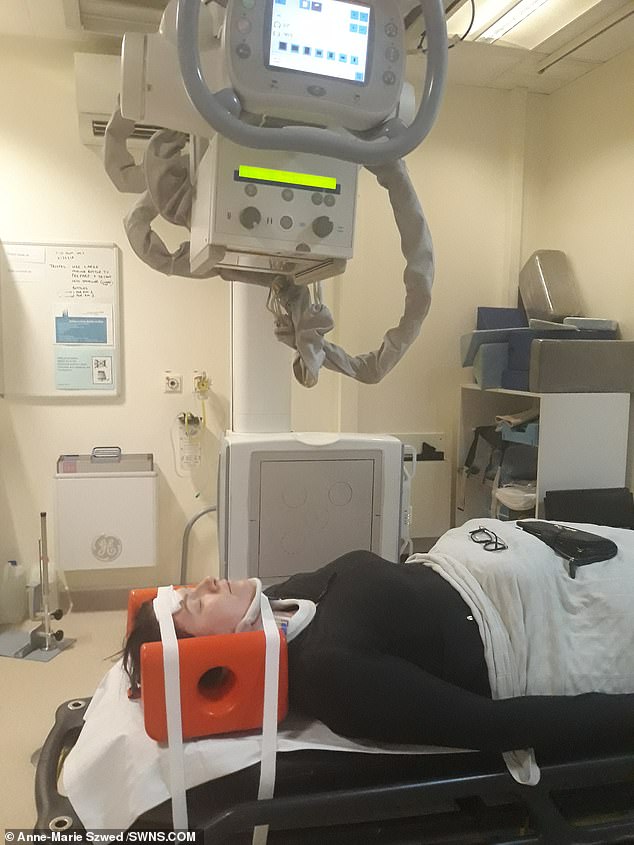 He said: ‘When Ms Szwed went into the toilets, Boyne followed her and began screaming at her: ‘I’m going to f***ing kill you.’

‘She grabbed Ms Szwed by the throat and lifted her up onto a ledge before smashing the back of her head against a tiled windowsill.

‘When Boyne let go, Ms Swed put her hands up to try to calm things down, but Boyne continued to shout abuse and threats at her before grabbing her by the air.

‘Boyne pulled her victim’s head backwards and smashed it against the edge of the sink before letting go and walking out.

‘As a result of the attack, Ms Szwed had a 4cm cut to the back of her head which required stitches.’

When she was arrested, Boyne lied about what had happened and at first denied the assault charge before later changing her plea to guilty.

Sophie Murray, defending, said Boyne had lost her job as a pastoral carer at a school and had also lost her home.