Former NSW Premier Mike Baird says the Coalition must learn from the rise of the teal independent movement across Australia and warned that no seat can be taken for granted as voters demand respect from their leaders.

In his first major political speech since resigning as the 44th Premier of NSW in 2017, Baird implored Liberal candidates across the country to reflect on why they entered politics, saying MPs must reconnect with their local communities. 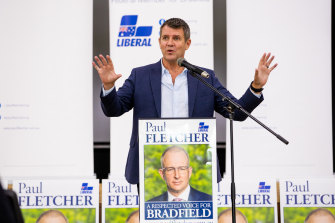 “Voters who vote for us want to have a sense that we are there for them, not for us.”

Baird, who represented the state seat of Manly during his decade in office, said rather than reacting angrily to the climate independent movement, the Coalition needed to reflect on why it was gaining momentum. 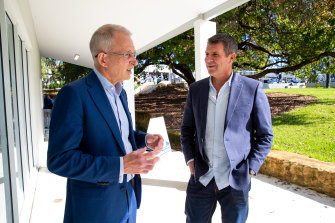 “If you look at the overall percentages, they’re falling for all major parties and in that context I think connecting-in locally is an incredibly important thing,” Baird told reporters after the campaign event.

“Rather than being angry about broad independents, there’s an opportunity for reflection…there’s no such thing as a safe seat, and you can’t take any seat for granted. Your number one responsibility is to connect locally, listen locally and deliver locally.“

He would not be drawn on whether the federal government was doing enough to address climate change.

Fletcher used his speech to party faithful to question the independence of the teal movement and warned of the dangers of a hung parliament dominated by independents.

Calling for climate action and integrity in federal politics, independent Nicolette Boele is contesting Fletcher’s seat of Bradfield, which he holds with a comfortable margin of more than 16 per cent.

Aside from campaigning on the track record of the Coalition government, Fletcher used his speech to personally attack federal Labor leader Anthony Albanese, who he described as “weak” and without a credible plan for the country.

Fletcher, who has held the seat since 2009, was joined by NSW MPs Tim James, Anthony Henskins and Legislative Assembly Speaker Jonathan O’Dea.

Baird conceded it had “been a while” since he had weighed into the Australian political debate, but said he had a “huge amount of respect” for Fletcher.

He listed JobKeeper, the vaccine rollout and the multi-billion dollar NorthConnex road tunnel as successes of the Coalition government during his speech.

Independent Zali Steggal holds Baird’s local federal seat of Warringah by more than 7 per cent, having beaten out former prime minister Tony Abbott at the 2019 election.