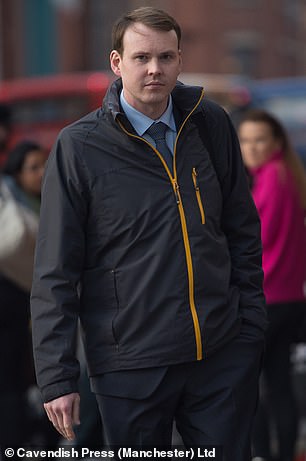 Dr Paul Wilkinson, 32, was jailed in September 2017 for stealing codeine from Aintree Hospital in Merseyside. A Medical Practitioners Tribunal Service in Manchester (Dr Wilkinson is pictured outside on May 31) has now ruled he can practice medicine

A disgraced NHS anaesthetist who was jailed for repeatedly stealing painkillers to feed an addiction has been told he can continue to practice medicine.

Dr Paul Wilkinson, 32, was dismissed from his post at Aintree Hospital in Merseyside in August 2016 after he became addicted to codeine and his performance was deemed ‘unsatisfactory’ during an annual review meeting with health managers.

But despite the dismissal, Wilkinson, from Silsden in West Yorkshire kept hold of his security pass and ID badge and would use it to sneak back inside the hospital. He was at the time suffering from progressively worsening back pain.

He would enter the intensive care treatment wards where he had worked while wearing hospital scrubs before stealing £1,100 worth of codeine pills which were intended for patients.

Wilkinson trespassed inside the hospital on 75 occasions and was seen by nurses wandering around wards and placing packs of tablets into his backpack before being stopped by a manager.

He later confessed to stealing a total of 896 codeine tablets on 32 of the trips but blamed the thefts on him using up his own prescription for a recurring back problem stemming from a lumbar spondylolisthesis condition.

It emerged Wilkinson had been become addicted to codeine after his condition worsened while working at the hospital. He also abused the drug to help with his bouts of stress and anxiety.

In September 2017, Wilkinson was jailed for eight months at Liverpool Crown Court after he admitted burglary and theft between August 2016 and April 2017.

He was subsequently reported to the General Medical Council and faced being struck off.

But at a Medical Practitioners Tribunal Service in Manchester last month, the doctor escaped with 12 months suspension from practice after he apologised and said he had since been getting counselling at recovery groups.

He had previously been given a warning in 2015 following a drink driving conviction.

Panel chairman Andrew Lewis said: ‘Dr Wilkinson’s apologies and expressions of remorse are genuine and reflect not just his regret for having acted as he did but also his determination and commitment so that he is never again in a position where he is likely to act dishonestly.

‘The Crown Court has a statutory duty to punish whereas the function of the [tribunal] is not to punish but to maintain the General Medical Council’s overarching objective.

‘The Tribunal was also sitting 18 months after the sentencing judge’s remarks during which time Dr Wilkinson has made great efforts in remediation and the development of insight.

‘The Tribunal was therefore satisfied that it would not be going behind the decision of the Crown Court if it were not to erase in this case.

‘This was an exceptional matter where the doctor had acted out of character and thereafter has displayed insight and determination to ensure there would be no repetition and was making exceptional progress.’ 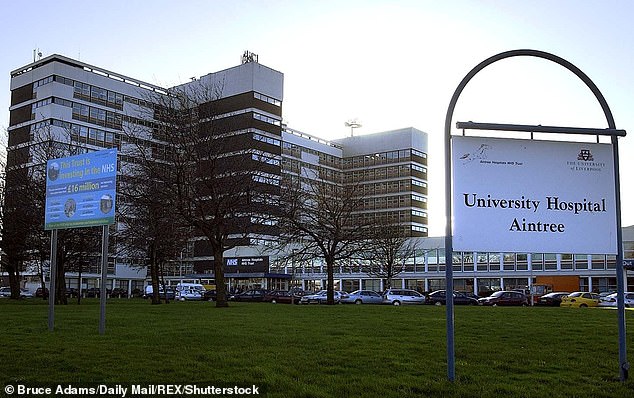 Wilkinson obtained work in Anaesthesia and Critical Care posts at Aintree in 2013. But in April 2016 he was dismissed from his post after he became addicted to codeine

Wilkinson had qualified as a doctor in 2011 and worked as a senior house officer in Liverpool before obtaining work in Anaesthesia and Critical Care posts at Aintree in 2013.

The Manchester hearing was told he had suffered from bouts of depression since 2005 and been prescribed codeine in 2012 due to his severe back problems.

But he gradually began taking increased doses of codeine beyond the prescribed limits to counter his progressively worsening back pain.

During an annual review meeting with health managers in April 2016 he was given an ‘unsatisfactory’ rating and left the hospital the following August.

Miss Susanna Kitzing, a Lawyer for the General Medical Council, said: ‘He was arrested on NHS Trust property after he tried to access a drug cabinet.

‘Ward staff had raised an issue that an individual was acting suspiciously, and that individual had been confronted by the deputy ward manager.

‘Dr Wilkinson later told police he had taken a quantity of codeine tablets, which were retrieved from his bag.

‘He was subsequently referred to the hospital with acute symptoms of opioid withdrawal but he said his drug issues didn’t compromise his clinical care.

‘He stole a total of approximately 896 tablets although these tablets were taken for personal use rather than any commercial reason.

‘There was no suggestion here that this is a doctor who would act dishonestly when well – but he does pose a significant risk of relapsing in terms of both his depression and drug dependence.’ 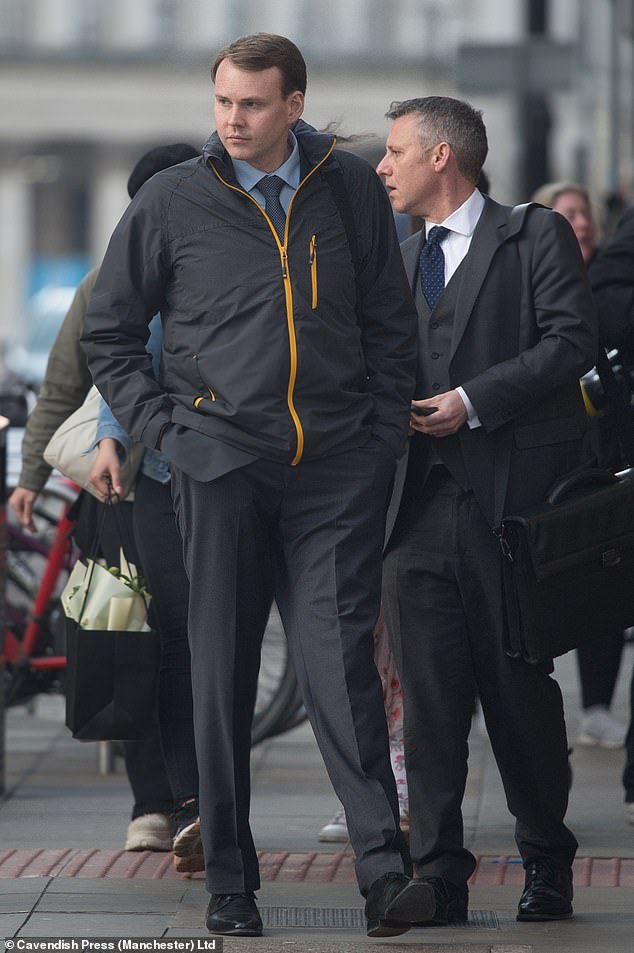 A psychological report showed that Dr Wilkinson had since begun a program of Cognitive Behavioural Therapy which had reduced his depression and he had since given up taking taking codeine tablets.

The doctor accepted the thefts were a ‘manifestation of his ill health/codeine dependence at the time.’

In a statement at the time of his arrest, Wilkinson said: ‘In the last 12 months I have found myself requiring more and more codeine tablets which were originally introduced to me by my GP by prescription.’

Dr Sasi Mahapatra, a leading psychiatrist told the hearing: ‘It is highly unlikely that he will slip back into the state he was. I was pleased and delighted with the efforts he had made, l do not think anyone else could have made further efforts.’

Wilkinson will face a review hearing when his period of suspension ends.

At the time he was jailed Judge Neil Flewitt QC told him: ‘I appreciate you told the police you never completely emptied the cupboard so to speak.

‘But your actions reduced the amounts of the drugs available to the patients that you were there to serve and care for and I don’t understand why your security pass was not taken from you.

‘You were, impersonating a doctor employed by that hospital, and taking drugs that were intended for patients.

‘But you were remarkably candid in police interview, you fully admitted what you had been doing, and you admitted far more than it was likely that the prosecution would be able to prove.’

A statement from Aintree University Hospital NHS Foundation Trust said: ‘We don’t discuss security issues but we have made several changes as part of the lessons learned from this incident.’