A fire on the esplanade of the popular seaside town of Apollo Bay has damaged several shops.

Police and emergency services responded to the blaze at 3.30am on Wednesday morning on Collingwood Street, which is the Great Ocean Road, in Apollo Bay. 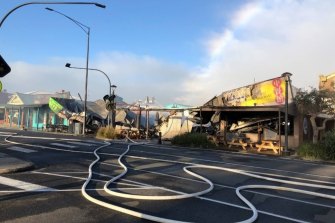 The Country Fire Authority said when they arrived, one restaurant was fully alight, with the fire rapidly spreading to two neighbouring businesses.

“The first two shops have been completely destroyed, with crews managing to save approximately a third of the last business,” a CFA spokesman said.

“A hazmat vehicle has been called to assist due to some chemicals at the scene.”

“Fortunately no one has been injured,” he said, “causation is yet to be determined.

“We expect the recovery process and investigation to take some time. Please avoid the area if possible.”

Like much of regional Victoria, the town had been reeling from the impact of depressed travel during the hard lockdown of metropolitan Melbourne at the height of the coronavirus pandemic.

Colac Otway Shire Mayor Kate Hanson said last year was difficult for the region but a sense of optimism had begun to return to the town over the long Easter weekend. 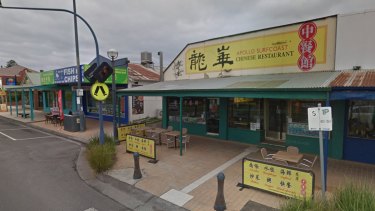 The shops were captured on Google street view before the fire. Credit:Google Maps

“Since November, since things started opening up, a steady stream of visitors has allowed businesses to find their feet again,” she said.

“It’s devastating for the people that run the businesses and it’s also hard for the town to go through the rebuild, however long that takes.”

Deputy Mayor Graham Costin, who lives in nearby Skenes Creek, said council would be erecting temporary fencing and sand to ensure that runoff from the incident is contained.

The area close to the site has also been evacuated.

The CFA declared the scene under control at about 6.30am on Wednesday morning.