Rayvell Powell, 32, and Javon Price, 21, were both booked into the downtown detention center and charged with first-degree murder and first-degree assault. They were both working as contract concessions workers at the stadium, according to an arrest affidavit.

The shooting occurred near gate A outside of the stadium about one hour after a game finished between the Colorado Rockies and Miami Marlins on Friday night.

The deceased victim, who was also a contracted concessions worker at the stadium, got into an argument with the suspects before the game on Friday, according to the affidavit. A fellow employee of the deceased victim told a law enforcement officer that the “argument started possibly over [the victim] and Javon [Price] talking to the same girl.” 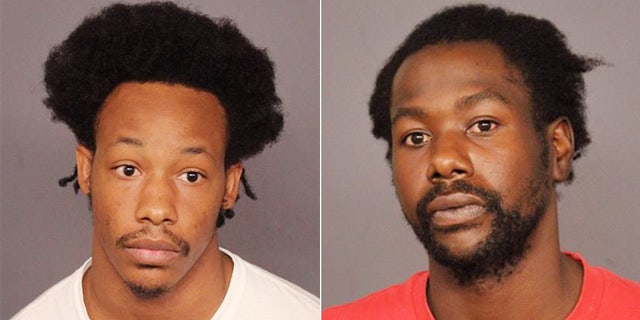 Javon Price, 21, and Rayvell Powell, 32, were charged with first-degree murder and first-degree assault after a shooting at Coors field on Friday night that left one person dead.
(Denver Police Department)

After the game, the victim got into another confrontation with the suspects and was shot, according to surveillance video reviewed by law enforcement.

“The victim is observed arguing with a black male in black clothing. A short time later, a dark-skinned male wearing black pants and a light-colored hoodie appears and then fires a gun striking the victim,” an arrest affidavit reads. “The victim runs down the stairs as the suspect continues to shoot at him. The victim drops a backpack and falls to the ground. While on the ground the suspect runs down the stairs and stands approximately five feet from the victim and fires four to five more shots at the victim.”

The second victim, an uninvolved bystander, was transported to a local hospital with non-life-threatening injuries. The identities of the victims have not been released.