Dementia-hit grandfather’s last word before he died was ‘visitors’ because he was so traumatised by only seeing his loved ones through window due to Covid, family claims

A dementia patient’s last words to his family before his death were ‘visitors’ after almost two years of ‘begging’ for them to be allowed inside his care home, his grief-stricken daughter has claimed.

Gillian Latham said her 84-year-old father Michael Benyo could not understand why his daughters were classed as ‘visitors’, limiting them to only seeing him through the window at Saxondale EMI Nursing Home, in Barnsley, because of Covid regulations.

Ms Latham said her father uttered the word ‘visitors’ with ‘dismay in his voice’ when the 56-year-old and her sister, Jaqueline Benyo, 50, were able to see him inside the home again, alongside his wife, Dorothy, 80, for the final three months of his life after they were given ‘essential caregiver’ status.

She said Michael hated thinking of his daughters as ‘visitors’ and that he had been ‘begging’ for them to be allowed inside while the home was locked down between February 2020 and June 2021. 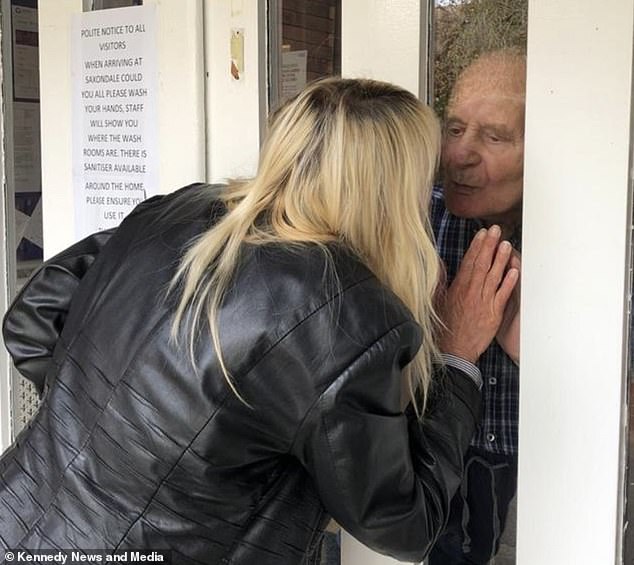 Michael kisses his daughter through the window at his care home while they were banned from going inside to see him, due to the rules surrounding Covid at the time 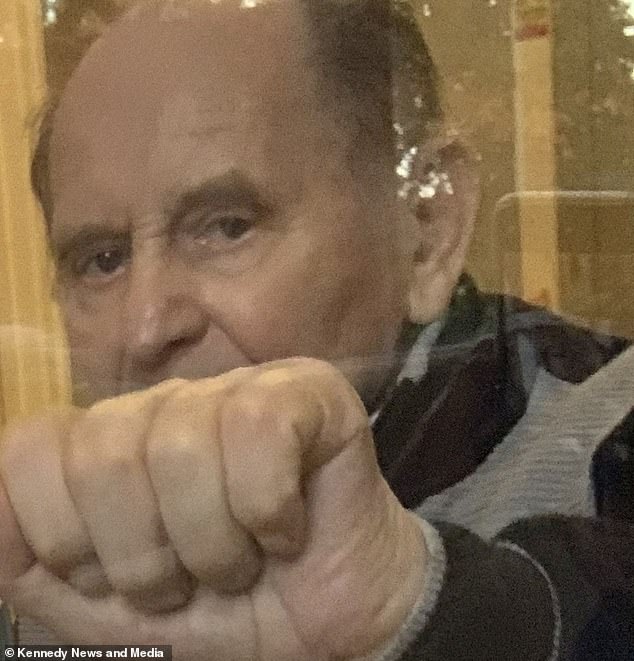 The Government was criticised for its ‘completely unacceptable’ blanket bans on care home visits during the pandemic.

More than a quarter of a million people signed a petition urging Boris Johnson to stop care homes ‘imprisoning our parents’ before it was delivered to Downing Street in May.

A report by the joint-party human rights committee found that between May 26 and June 20 last year, 97 per cent of care homes were closed to all visitors.

This continued for months afterwards for many people in Tier Three and Tier Four areas – even though visits were still allowed.

Ms Latham, who works as a nurse, has revealed the family’s pain at watching her ailing father from behind a window – sharing images showing the confusion on the retired miner’s face as he taps on the pane of glass. 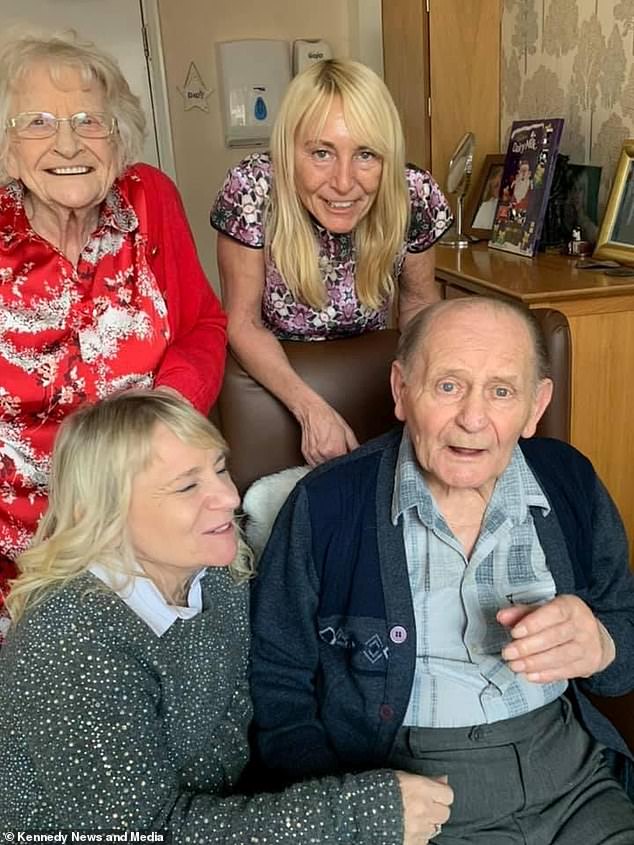 A dementia patient’s last words to his family before his death were ‘visitors’ after almost two years of ‘begging’ for them to be allowed inside his care home. Pictured: Michael Benyo, 84, with his daughter Gillian Latham (back right), wife Dorothy Benyo (back left) and other daughter Jaqueline Benyo (bottom left) 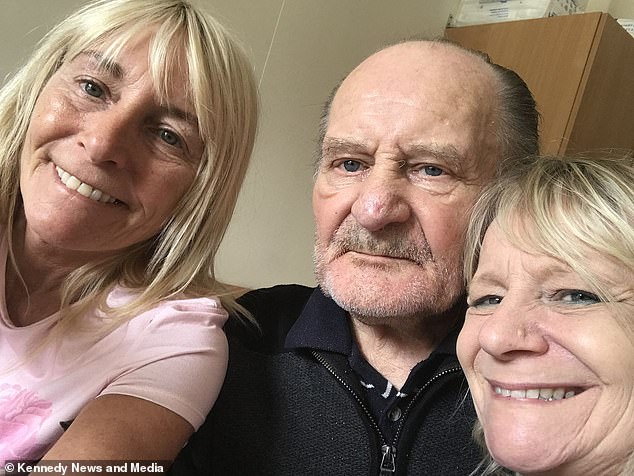 Michael pictured with his daughters: Gillian (left) and Jaqueline (right). They were unable to go inside his care home between February 2020 and June this year

‘When dad was leaving the nursing home in a wheelchair [on the way to hospital], the visitor sign is on the wall near the care home doors.

‘That’s the last word he said – with dismay in his voice and sadness in his face.

‘He detested the word. He always said “they’re not visitors, they’re my daughters – my family”. He hated thinking of us as visitors.

‘In many photos, the anguish in my dad’s face was shocking. It was terrible. Dad didn’t understand why we couldn’t come in.

‘I’m glad he’s out of this and isn’t threatened with not being able to see his daughters or his wife.

‘I wouldn’t have been able to cope now if I hadn’t seen my dad before he died.’ 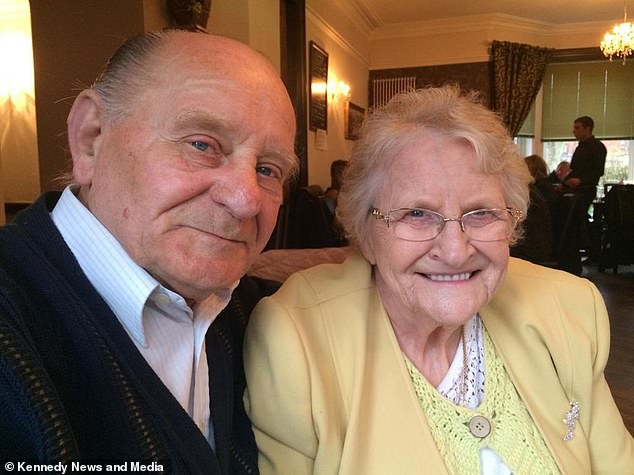 Michael with his wife Dorothy Benyo. He died in October, three months after his daughters were finally allowed back into his care home

Ms Latham said she was given essential caregiver status on June 24, before her sister got hers in July, allowing them both into their father’s room for the first time since February 2020.

Every time they went into the home they had to take lateral flow tests and also had to have a PCR test each week.

Michael, who first came to the UK as a Hungarian refugee in 1957, spent the last three and a half years in residential care, moving into a nursing home in May 2019 after a long period in hospital.

Less than a year later, the home went into lockdown as Covid cases began to rise, leaving Ms Latham fighting to see him in person.

Ms Latham said: ‘It’s shocking what people are going through.

‘Three weeks before lockdown in February 2020, the manager shut down. We agreed with that.

‘But when everyone was coming out of lockdown and they could see their families, we still couldn’t see my dad [indoors]. It was behind glass.

‘He was banging on the windows all the time – begging staff to let us in.

‘The deputy manager said they weren’t having visitors and my dad shouted “they’re not visitors – they’re my daughters. Let them in”.’ 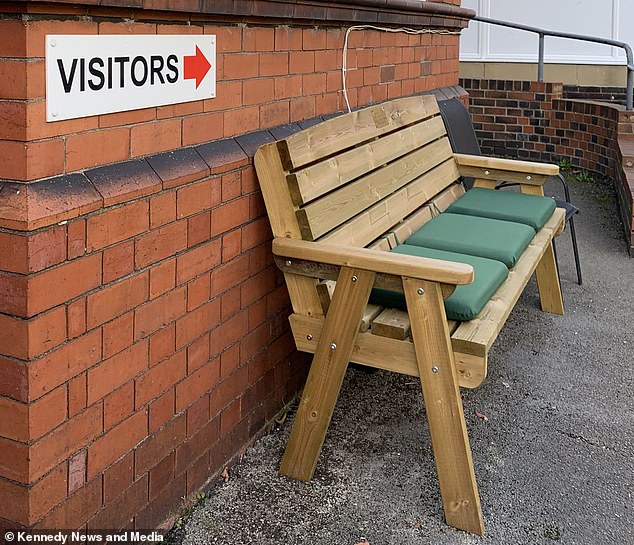 The visiting sign Michael saw while he was being wheeled out of the care home to hospital. Ms Latham said: ‘He detested the word [visitors]. He always said “they’re not visitors, they’re my daughters – my family”. He hated thinking of us as visitors’

She said her father’s dementia progressed while they were locked out because ‘the conversation wasn’t very good at all’.

Praising her father’s care as ‘excellent’, Ms Latham said her only complaint was about the access to her father.

She added: ‘My dad loved us to go and see him.

‘He was happy in the care home. He went viral in a video in 2019 singing around a Christmas tree with the staff.

‘He loved people. He wanted everybody to be together as family.

‘He cared for people, even residents. He’d always ask if they were okay.’

In September this year, Michael’s care home had a Covid outbreak and Ms Latham said she and her sister were told visitation was banned.

But when they refused to stay away, they were let back in, unaware that less than a month later their father would pass away.

The home messaged Ms Latham on September 27 to inform her about the outbreak. She said she did not phone back, choosing instead to visit the home and told them she would ‘rather die than watch my dad bang on the windows again’.

‘I was crying inconsolably’, she added.

‘We grieved all along when dad was behind glass. It was like someone had died.

‘I got to spend some time with dad before he passed away. I got a phone call from the care home and they said my dad had aspirated again.

‘When I got up there, they were changing him. Someone went in and I saw he was stood up.

‘I thought he was going to be okay but when I went in the room, he was grey and his oxygen levels were low.

‘We had a really good conversation with him. Whether some people would have understood half of what he was saying, I don’t know.

‘On the night he died, I could see when I got into the care home that he wasn’t going to make it. He was grey and had an abnormal heart rhythm.

‘As soon as he got into hospital, he was on 15 litres of oxygen and struggling to breathe.

‘I got the call at nearly 5pm and he died at just after midnight. My mum saw him for an hour.’

Now three weeks on, Ms Latham is telling her father’s story in the hope others will not have to continue battling to see their loved ones in care homes.

She said: ‘Dad was so hard-working, an amazing man. He touched many people’s hearts.

‘He said “everybody should be together, love each other, wife, family, friends, be together, get better”. I think he understood a bit about Covid because he did watch TV and the news.

‘It’s hard to fully say what he was processing.

‘Now, in the current climate, with talk about further lockdowns and if people don’t get boosters, it makes you feel concerned that families will be parted again from loved ones.

‘We’re praying that others don’t carry on suffering the daily grief for someone who is still alive, as we felt prior to getting in to see dad.’

Bondcare, who run Saxondale EMI Nursing Home, said: ‘Staff and management at Saxondale Nursing Home have worked extremely hard during the pandemic to ensure the safety of residents, and followed the government guidance issued, regarding visiting.

‘We fully acknowledge the difficult times care home residents, families and staff have had to endure during the time Saxondale has had Covid outbreaks and we will continue to do our utmost to ensure our residents safety and wellbeing.

‘Lastly, we look forward to the day we can fully open up with no restrictions and are extremely excited to welcome old and new faces, we have truly missed you all.’