Jerusalem: A day of upheaval at the holy sites of this contested city quickly widened into a night of warlike violence on Tuesday as hundreds of rockets from the Gaza Strip resulted in the deaths of at least two Israelis and retaliatory air strikes killed at least 22 Gazans.

Clashes also broke out in the West Bank between Palestinians and Israeli soldiers, as well as between Jewish residents, Israeli police and Arab citizens in Arab-Israeli towns and mixed Jewish-Arab towns, leading to hundreds of arrests and at least one Palestinian fatality. 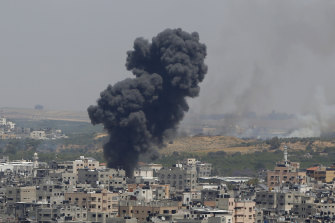 Smoke rises after an Israeli air strike in Gaza on Tuesday.Credit:AP

The armed exchanges, the worst eruption of violence between Israel and Palestinians in recent years, continued into a second day as security officials braced for fighting to escalate even further. Schools in several parts of Israel were closed.

Air-raid sirens sounded every few minutes in towns where many Israelis had already passed the night in bomb shelters. On Tuesday afternoon, more than 200 rockets struck southern Israel within the span of an hour, including in the Israeli coastal city of Ashkelon, just north of Gaza, according to media reports. At least four members of a family were reported injured when one rocket hit an eight-storey apartment building.

“We fired rockets at Ashkelon following an Israeli attack and an attack on a house west of Gaza City,” said a spokesman for Hamas’ military wing.

“If Israel continues to attack, we will turn Ashkelon into hell.” 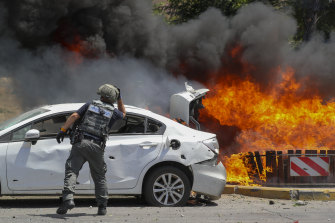 At around midday on Tuesday, at least two residents of Ashkelon were killed when a rocket struck their apartment building. At least three Israelis were hospitalised earlier after rockets hit a school and residential buildings in Ashkelon and Ashdod. Officials told residents to clear the streets and remain in shelters.

Military officials said more than 500 rockets had been launched from Gaza since the start of the flare-up, although a large percentage of them failed to cross into Israel, exploding instead inside the enclave. The Israeli army’s expansive anti-missile defence network, known as Iron Dome, destroyed more than 90 per cent of the rockets that reached Israeli airspace, the army said.

In response to the launches, the Israel Defence Forces (IDF) carried out sustained retaliatory strikes inside the Gaza Strip overnight and into the morning, with planes conducting more than 140 attacks.

The IDF said it killed 15 Hamas and Palestinian Islamic fighters in strikes that targeted rocket manufacturing and storage sites, training and military complexes, two underground tunnels and the home of a battalion commander.

Images from the Shati refugee camp near Gaza City on Tuesday morning showed scenes of destruction following at least one Israeli air strike that appeared to target the top floor of a nearby residential building. The building’s concrete roof collapsed onto the apartment below, where residents were shown picking through the rubble.

Palestinian news agencies reported that two people were killed in a strike in the Shati camp. In separate images, children in the camp’s cramped quarters near the sea sifted through the debris of a strike that also damaged their home.

Palestinian health officials said nine children were among the dead in Gaza. Video on social media showed grieving families amid the rubble of damaged buildings. An Israeli military spokesman said the army would conduct an investigation into reports of children killed. He blamed Hamas, the Islamist militant group that governs Gaza, for embedding weapons and launch sites in civilian areas.

“We go to great lengths to strike only military targets,” said army spokesman Jonathan Conricus. “They are in houses, courtyards, near schools and mosques.” 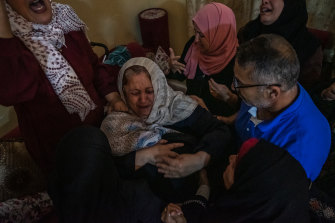 Relatives of Palestinian Ahmed Al-Shenbari, who was killed during an Israeli raid in Beit Hanoun, Gaza, attend his funeral on Tuesday.Credit:Getty Images

World leaders urged both sides to rein in their forces and avoid a further escalation, but there were few signs on Tuesday that the conflict would ease quickly.

On Tuesday morning, the Israeli military called up eight reserve border police battalions and received government approval to call up another 5000 reservists from various units. It also deployed artillery batteries in the towns near the Gaza Strip and said it was boosting its anti-rocket systems around Gaza.

The Israeli army has its “foot on the gas,” and attacks on the Gaza Strip are likely to intensify in the coming days, said IDF spokesman Hidai Zilberman. 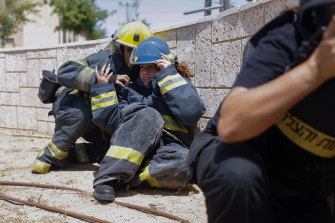 Israeli firefighters take cover as a siren warns of incoming rockets from Gaza.Credit:AP

The Monday night fighting erupted after days of clashes in Jerusalem, where tensions have been mounting over the pending eviction of several Arab families from the city’s Sheikh Jarrah neighbourhood. Near-daily protests in the neighbourhood have built up as Israel’s High Court prepares to rule on a decades-long property dispute that could result in the families losing their houses to Jewish Israelis.

That standoff widened in recent days as Ramadan, the Muslim holy month, brought swelling crowds to al-Aqsa and a series of violent clashes with Israeli police. More than 300 Palestinians were injured Monday, when thousands of nationalist Israelis also poured into the Old City to mark Israel’s 1967 takeover of Arab East Jerusalem.

Monday evening, seven Gaza-launched rockets streaked toward Jerusalem, triggering air-raid sirens around the city and causing residents to seek cover. The attack, the first to target the city since 2014, shocked Israeli officials and set the stage for a major escalation. Netanyahu declared that Hamas had crossed “a red line.”

Neighbouring countries, reportedly including Egypt and Qatar, worked behind the scenes to ease the tensions, but protests were reported in Arab nations around the region as Muslims rallied around calls to defend al-Aqsa and East Jerusalem from Israeli aggression.

In the mixed Jewish-Arab Israeli city of Lod, mostly young Arab protesters threw stones and fireworks at passersby and police and torched cars, trees and a military prep school that contained a synagogue. Jewish students grabbed Torah scrolls as they evacuated the building.

Mussa Hasson, a 25-year-old resident of the city, was shot to death after a man whose identity is still unknown opened fire on a group of mostly young Arab protesters who were carrying Palestinian flags. Four other Arab protesters were injured. A Jewish man and another unidentified man who are suspected of involvement in the shooting were taken into police custody.

Hundreds of Arab protesters who had accompanied wounded colleagues to Assaf Harofeh Hospital in central Israel threw stones, vandalised equipment and intimidated both Jewish and Arab medical staff. The staff moved the injured patients to different parts of the hospital while Israeli police fired stun grenades to disperse the crowds.