Footage has emerged of the shocking moment a driver attempting to overtake an oil tanker spins out of nowhere into the path of a car carrying a child.

The dash-cam footage from a Moscow motorway details the horror as the vehicle carrying the child slams into the overtaking car which ends up smashing into metal railings.

The child can be heard to start crying as two other occupants of the car scream and speak in Russian.

The occupants try to calm the child after the accident from 21st July that miraculously caused no serious injuries.

The ‘Steelbear’ truck keeps its forward trajectory sending the silver estate car spinning dramatically into the path of the screaming occupants of the second car.

A man appears to hold tightly to his steering wheel in a last ditch attempt to keep control of his damaged vehicle. 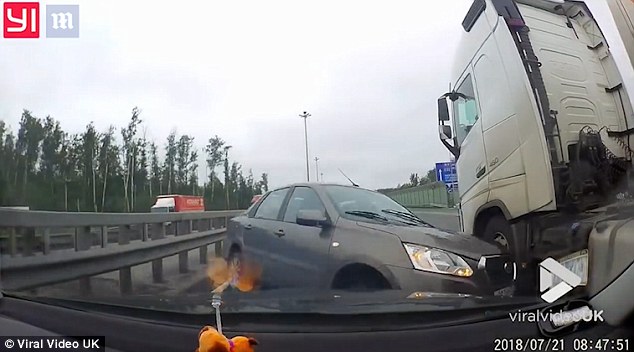 The overtaking car sustained minimal damage even after it became wedged between the ‘Steelbear’ truck and the second car. The truck kept moving forward and sent the car spinning

It spins off into metal hoardings and doesn’t seem to have too much damage despite the collision.

The silver vehicle then slides into the middle section of the four-lane road and brakes as the tanker, seemingly undamaged, continues on.

A similar incident had fatal consequences in Italy on Monday when a petrol tanker slammed into the back of a truck on a highway near the Bologna Airport, causing a huge explosion which killed at least one person and put dozens in hospital. 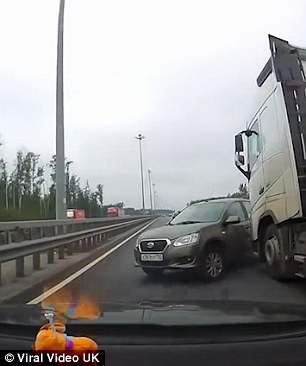 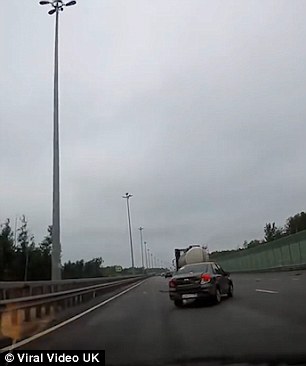