Melbourne-based scientists have developed a new anti-viral technique that can be quickly tweaked to target viruses including COVID-19 – an important step on the path toward new pandemic defences.

The drug is at the earliest stage of development, and has not even been tested on animals – suggesting it is unlikely to be of use in the current pandemic.

But scientists, including Nobel laureate Professor Peter Doherty, have long been calling for investment in so-called ‘broad-based antivirals’, drugs that could immediately fight new pandemics as they emerge. 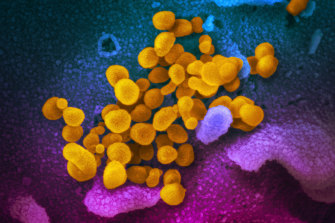 This undated electron microscope image made available by the US National Institutes of Health in February shows the SARS-CoV-2 virus.Credit:AP

The new drug is based on the enzyme CRISPR, the well-known tool scientists use to cut and paste DNA to genetically modify organisms.

In this case, scientists at the Doherty Institute and the Peter MacCallum Cancer Centre are just using the cutting mechanism to snip up COVID-19’s DNA.

“The flexibility of CRISPR-Cas13 – which only needs the viral sequence – means we can look to rapidly design antivirals for COVID-19 and any new emerging viruses,” said Professor Sharon Lewin, director of the Doherty Institute and one of the authors on a study on the new drug, published Tuesday in Nature Communications.

CRISPR uses a tool scientists borrowed from bacteria: a molecular cut-and-paste system that can be programmed to find a sequence of genetic code and cut it. Bacteria use this tool to cut up invading viruses; scientists have learned to use it to cut and paste genes at will, allowing them to easily manipulate an organism’s DNA.

The new anti-viral technique uses CRISPR to target a section of COVID-19’s DNA that contains the blueprints for the virus’s crucial machinery.

With its blueprint shredded, the virus cannot reproduce.

By changing the target, the anti-viral technique could theoretically be used against a broad range of different viruses – including ones that are yet to jump into humans.

However, as the team’s paper notes, they do not yet have a way of getting their anti-viral into human cells.

“This is really only the first step. They need to develop a delivery system,” said Professor Peter White, head of the molecular microbiology laboratory at the University of NSW and an expert in anti-viral drugs.

“It’s a very clever technology, but it’s in its early days in cell culture at the moment. There is a lot to be done. We’ll have to wait for a few years. It is more likely useful for the next one. It’s going to take at least five years to get it even into phase 1 clinical trials.”

“This is CRISPR and is very good work,” he said. “It looks promising and the approach has thought about escape mutants too. The need for therapeutics is great and so anything promising in this area is good news”

COVID-19 is not the first pandemic humanity has faced, and it will not be the last, scientists say – pointing to evidence suggesting human activity like deforestation and agriculture is speeding up the rate at which new viruses jump from animals to humans.

With pandemic threat levels higher than ever before, new defences are needed. Broad-spectrum anti-viral drugs are seen as one key weapon to have in the pandemic arsenal.

“Unlike conventional anti-viral drugs, the power of this tool lies in its design-flexibility and adaptability, which makes it a suitable drug against a multitude of pathogenic viruses including influenza, Ebola, and possibly HIV,” said Dr Mohamed Fareh, a researcher at the the Peter MacCallum Cancer Centre and one of the drug’s co-inventors.

Liam Mannix’s Examine newsletter explains and analyses science with a rigorous focus on the evidence. Sign up to get it each week.