Crown courts face backlog of 41,000 trials due to lockdown as government may be forced to covert civic buildings into ‘Nightingale’ courtrooms to catch up

Crown courts are facing a backlog of 41,000 trials due to the lockdown as the government may be forced to convert civic buildings into ‘Nightingale’ courtrooms to catch up.

Lord Chancellor Robert Buckland admitted that the Government faces a ‘challenge’ to manage the growing caseload, whilst justice minister Chris Philp announced that a total of 168 courts have reopened across England and Wales as of June 3.

Mr Buckland also confirmed that the construction of temporary ‘Nightingale courts’ in civic buildings to tackle the backlog is being actively considered.

Challenged by Labour’s shadow justice secretary David Lammy in the Commons, Mr Buckland said: ‘The overall caseload in the crown court is approaching just around 41,000. Before the crisis, it was 39,000 so there has been a slight increase. 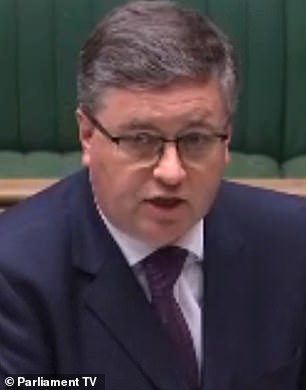 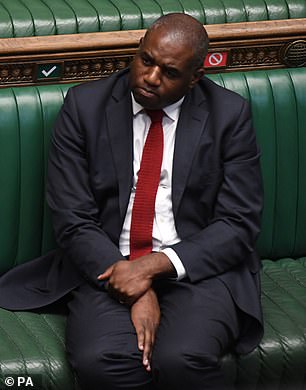 ‘What I will say is that within that caseload the courts have managed a lot of cases that can be dealt with administratively and by way of plea.

‘That does leave a cohort of trials to be dealt with, normally 200 jury trials will be heard a week in England and Wales. We are still dealing with a very small number. That will clearly tell him the scale of the challenge.’

Mr Philp added: ‘We are currently engaged in a herculean national effort to get our courts back up and running, starting with the use of remote technology.

Prisons minister Lucy Frazer said 2,500 to 3,500 deaths would have occurred in prisons had strict lockdown measures not been taken.

Shadow justice secretary David Lammy said: ‘As children in the general population continue returning to school, those in youth offender institutions remain locked up in their cells for almost the whole day without any access to education.’

He added: ‘As the Government prioritises returning children to school, will she give me a date by which she expects all children in custody will have access to education, activities, family and professional visits?’

Ms Frazer replied: ‘He is right to identify that in the youth estate, like in the adult estate, we took severe measures when we realised we were facing a pandemic and we took those measures to save lives.

‘We were looking at 2,500 to 3,500 deaths across the estate and so we took drastic action that we considered very carefully which resulted, he is right to say, in a severe lockdown. And the result of that, although every death is tragic, we have only suffered 23 deaths in our prison estate.’

She added: ‘I am pleased to say that time out of cell has increased as the lockdown has continued and in YOIs children are now let out between two and three-and-a-half hours every day.’

After all jury trials were halted on March 23 to comply with the Government’s Covid-19 lockdown measures, Mr Buckland also confirmed that his department has been looking at civic buildings to house proceedings as they begin to resume.

Plaid Cymru MP Hywel Williams (Arfon) said: ‘It is reported today that ministers are desperately looking for venues for Nightingale courts – well 22 magistrates’ courts were closed in Wales between 2010 and 2020.

‘Will the minister reopen these courts so that the people of Wales can be properly served?’

Mr Buckland replied: ‘Mr Williams makes an important point but what he has to remember of course is that the extra courts need to be compatible with social distancing.

‘So what we are looking for is space and room in order for people to stay safe.

‘And that is why in Wales we have been looking particularly at civic buildings near to the established court centres in Cardiff and Swansea and, indeed, I think of Mold as well and Carmarthen, which I know well.

‘I am confident from my close consultation with partners in Wales that the work is being done that will allow that capacity to increase and allow justice to be served more swiftly in Wales.’

Meanwhile prisons minister Lucy Frazer said 2,500 to 3,500 deaths would have occurred in prisons had strict lockdown measures not been taken.

Responding to Mr Lammy’s questioning of visitor restrictions, she told MPs: ‘We were looking at 2,500 to 3,500 deaths across the estate and so we took drastic action that we considered very carefully which resulted, he is right to say, in a severe lockdown.

‘And the result of that, although every death is tragic, we have only suffered 23 deaths in our prison estate.’