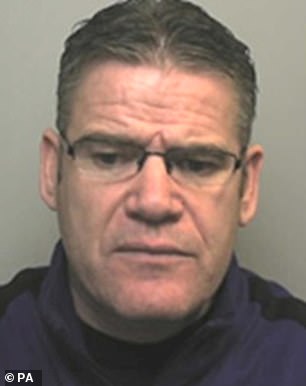 Thomas ‘Bomber’ Kavanagh, originally from Dublin, was described by the National Crime Agency as the ‘top man’ in the UK for the Kinahan organised crime group, which operates in Ireland

An Irish crime boss has been jailed for 21 years for smuggling £30million of drugs into the UK after police found thousands of pounds worth of cash stuffed down the back of a sofa when they raided his luxury bullet-proofed mansion.

Thomas ‘Bomber’ Kavanagh, originally from Dublin, was described by the National Crime Agency as the ‘top man’ in the UK for the Kinahan organised crime group, which operates in Ireland.

The National Crime Agency estimates the Irish network imported drugs with a street value of more than €35million (£30million) into the UK.

Kavanagh lived with his family in a lavish fortified mansion, complete with reinforced doors and bulletproof glass, in Tamworth, Staffordshire, from where he ran his criminal empire.

When officers raided the property as part of a wider investigation to dismantle his drugs empire, in January 2019, officers found weapons, including knives, baseball bats, swords and an illegal stun gun for which Kavanagh was previously given a three-year jail sentence.

Officers also seized cash worth around £35,000 in various denominations, including sterling, dollars, euros and Emirati dirhams, which had been stuffed into drawers, bags and down the back of sofa cushions.

NCA officers also targeted his associates, Dublin-born brothers-in-law Gary Vickery, 39, and Daniel Canning, 43, who were behind drug cargos worth £30million, as well as selling firearms.

Kavanagh, of Tamworth, along with Canning and Vickery, both of Solihull, West Midlands, all admitted conspiring to import class A and B drugs, and money laundering. 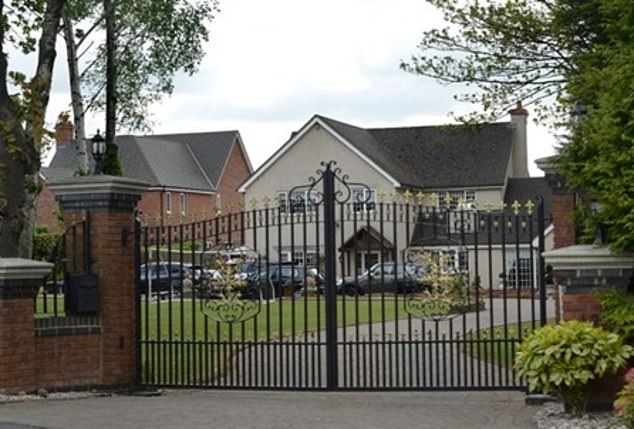 Kavanagh lived with his family in a lavish fortified mansion, complete with reinforced doors and bulletproof glass, in Tamworth, Staffordshire, from where he ran his criminal empire 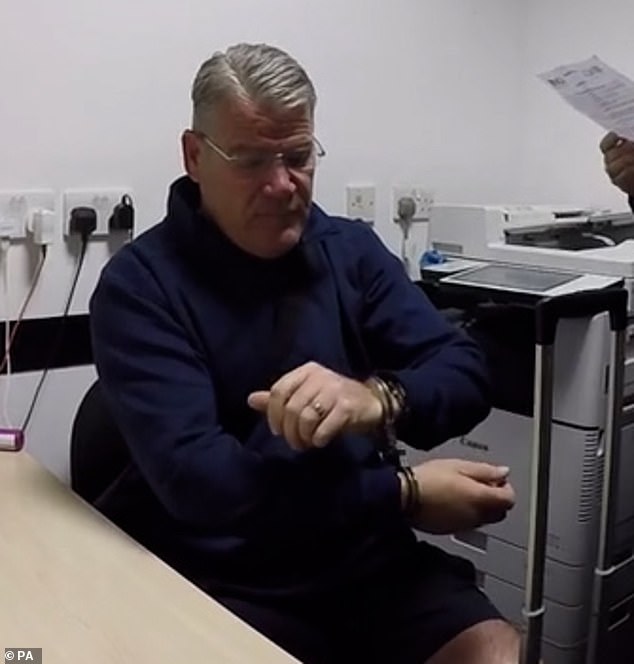 Kavanagh was arrested at Birmingham Airport on January 12, 2019, as he returned from a family holiday to Mexico

NCA Deputy Director of Investigations Matt Horne said: ‘Kavanagh was a high ranking member of the Kinahan cartel, an organised crime group synonymous with acts of violence. He was their main man in the UK.

‘Through their criminal connections overseas, his organisation was able to organise, import and distribute drugs worth many millions of pounds.

‘These men considered themselves to be untouchable, but we were able to systematically dismantle the group and prove that this was not the case.’

In January 2017 Irish police had traced a number of seizures of drugs and weapons to Midlands-based freight and logistics firms linked to Canning, Vickery and a third Irish man named Martin Byrne.

Vickery, Canning and Byrne were all arrested by the NCA in October 2017 following the seizure of 15 kilos of cocaine and more than 220 kilos of cannabis, found inside a six-tonne industrial tarmac removal machine at Dover.

The drugs had been hidden inside the machine, which had a tracking device fitted and was due to be delivered to an industrial unit in Wolverhampton.

This led NCA officers to raid two industrial units linked to the gang, one in Wolverhampton and one in Wednesbury.

In the Wednesbury address, investigators found the shell of an industrial transformer, which still had traces of cocaine inside, as well as a black holdall containing a handgun and ammunition.

Byrne’s DNA was found on the gun, and his fingerprints on the bag it was in.

Investigators also found boxes full of tracking devices, identical to the one found on the machine seized at Dover.

Small amounts of cash and further phones and encrypted communications devices were found at Canning’s home in Dickens Heath.

Information on those devices showed Kavanagh was heading up the criminal enterprise, with messages between the group referring to him as ‘Gaffer’. He was also known as Bomber and an NCA officer said there were ‘various different rumours’ as to where Kavanagh got the nickname ‘Bomber’, but it was ‘quite well documented that that is a nickname which is attached to him’.

Kavanagh was also in contact with criminal contacts in Europe to orchestrate shipments.

He was arrested at Birmingham Airport as he returned to the UK on January 12, 2019, from a family holiday to Mexico. 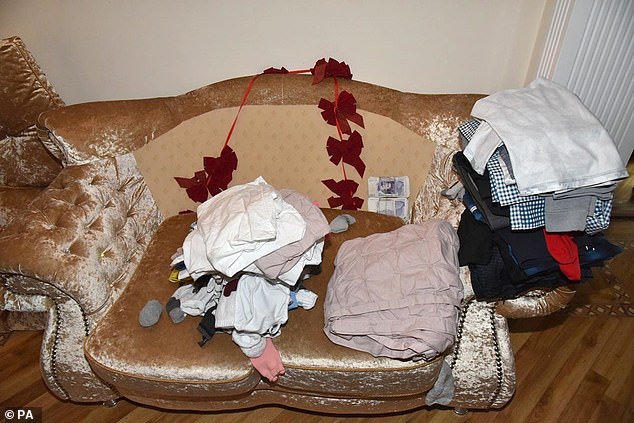 When officers raided Kavanagh’s home, they seized cash worth around £35,000, which had been stuffed into drawers, bags and down the back of sofa cushion 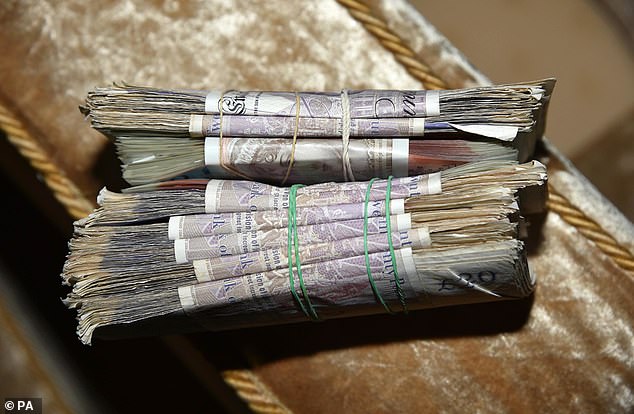 The seized cash was in various denominations, including sterling, dollars, euros and Emirati dirhams

Communications between the group also provided evidence that they had been involved in at least four more drug importations prior to the Dover seizure in October 2017, bringing the estimated street value of cocaine importations by the group up to £23.4million.

Cannabis importations over the same period are estimated to have been worth around £6.4million.

The trio had pleaded guilty in July 2020 but Vickery’s extradition from Lanzarote delayed their eventual sentencing. Martin Byrne died of cancer in August 2018 before he could be charged.

Deputy Director Matt Horne added: ‘This investigation involved co-operation with An Garda Síochána in Ireland. We are determined to work together to target criminal networks impacting communities on both sides of the Irish sea.

‘Our financial investigation into Kavanagh and his associates is ongoing, with a view to stripping them of any assets they have acquired through their criminality. This is not the end of our activity targeting this group.’

NCA officers have already obtained freezing orders on a number of high value items, including watches, bikes and jewellery, seized as proceeds of crime from Kavanagh’s Tamworth mansion, as well as the house itself.

Vickery’s property in Spain is also subject to a restraining order. 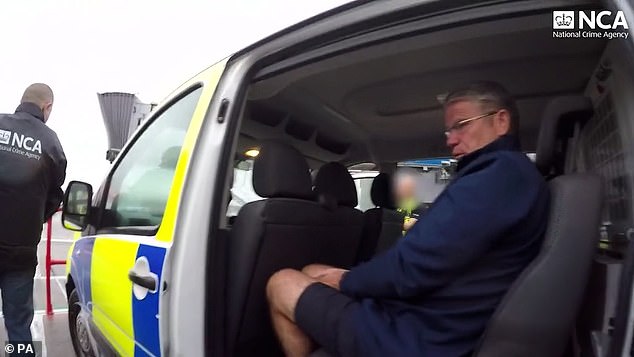 ‘This organised crime group imported millions of pounds worth of dangerous drugs into the country, concealing them in machinery in a bid to evade detection.

‘They showed no regard for the communities they were putting at risk and pleaded guilty in the face of overwhelming evidence showing their part in this illicit operation.

‘Cases like this demonstrate our commitment to disrupting organised criminal activity – and ensuring they face justice.’

Assistant Commissioner John O’Driscoll, who heads Organised and Serious Crime within An Garda Síochána, said: ‘The successful outcome to court proceedings in the UK today represents a very positive development in efforts being made by law enforcement authorities, at an international level, to tackle criminality engaged in by organised crime groups and networks that have an international dimension and who, through the sale of drugs and other crimes have a negative impact on communities across the globe.

‘An Garda Síochána has forged a very powerful working relationship with the UK’s National Crime Agency, which is assisting in ensuring that communities in the UK and Ireland are better protected from organised crime.’