This is the moment a cruel speedboat driver was caught on camera repeatedly circling a terrified swan and apparently trying to hit it.

Olivia Satchwell, 18, from St Neots, Cambridgeshire, recorded the disturbing clip on Wednesday afternoon at Southlake Aqua Park in Little Paxton, Cambridgeshire, and reported it to the police.

In the footage the man, who appears to be flouting lockdown rules to go out on his boat, keeps his eyes fixed on the lone swan while he circles it. 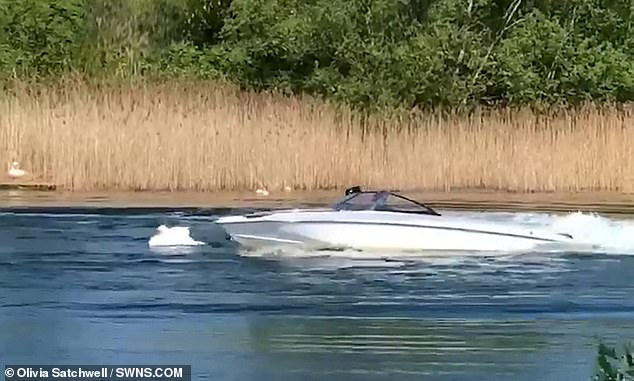 The distressed bird is trapped in the middle of the boat’s wake, being swirled around by the motion.

An onlooker can be heard saying: ‘Oh my god’ as they watch helplessly.

Miss Satchwell, an estate agent, said: ‘He was directly trying to hit the swan, driving away to gain speed and then going straight towards it.

‘He also stood up and shouted at the mother swan on the nest. 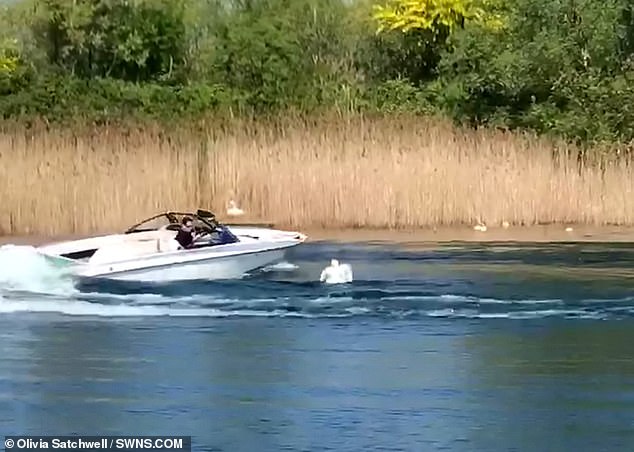 ‘He was doing it for five to ten minutes straight.

‘I could see him clearly, but he couldn’t see me as I was behind a bush watching and filming him.

Some people have suggested to Miss Satchwell that he may have been ‘checking for injuries’ but she doesn’t believe that is true because ‘the swan was swimming fine before he showed up’. 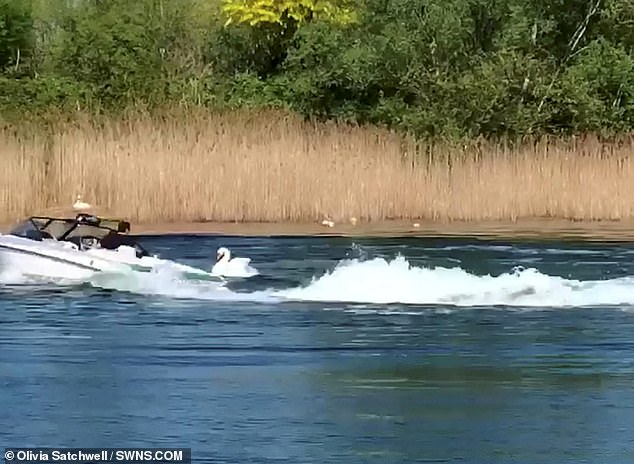 She added: ‘I would’ve loved to shout over at him but I had no chance of him hearing me as I was quite far away and his boat was loud.

‘There must be something wrong with this man to purposely go out of his way to spend his time doing this.

‘He knew exactly what he was doing and where they were. He didn’t go there for anything else other than to cause them trouble.’ 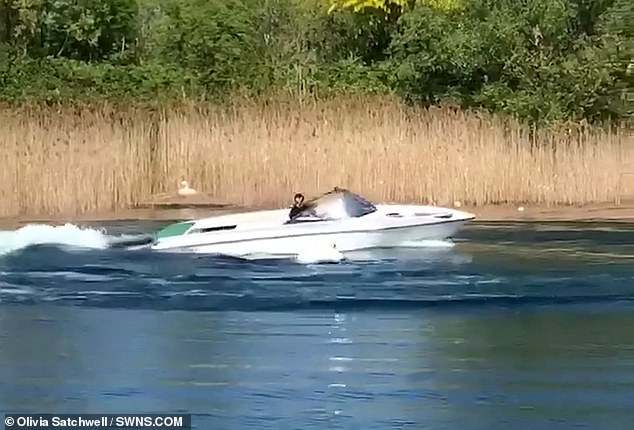 Miss Satchwell said other people had complained about the same boat to her.

Cambridgeshire Police confirmed they had been called at 2.42pm on Wednesday.

The spokesperson added: ‘The complainant reported a man with a speed boat purposefully trying to drive into two swans near to the boat house.’

Anyone with information about this incident is asked to contact police either online at www.cambs.police.uk/report quoting CC-22042020-0234 or call 101.

WHAT CAN YOU AND CAN’T YOU DO DURING LOCKDOWN

A three-page document, entitled ‘what constitutes a reasonable excuse to leave the place where you live’ has been produced by the National Police Chiefs’ Council (NPCC) and the College of Policing.

The regulations say householders can go outside if there’s a ‘reasonable excuse’, such as shopping for essential items, providing medical help and for exercise.

It says buying food for several days, including ‘luxury items’, including alcohol, is likely to be reasonable and is not restricted to just basic food supplies.

People are not allowed to buy paint and brushes ‘simply to redecorate a kitchen’ but can purchase tools and supplies to repair a fence.

On exercise, the guidance lists driving to the countryside for a walk as ‘reasonable’ if ‘far more time’ is spent walking than driving. However, driving for a ‘prolonged period with only brief exercise’ is not reasonable.

Under the guidance, police are advised not to intervene if people stop to rest or eat lunch while on a long walk, but short walks to sit on a park bench are not allowed.