Judge throws out case on ‘wildcat’ second Scottish independence referendum for being ‘hypothetical, academic and premature’ after SNP vow to hold one

Scotland’s supreme civil court has dismissed a case questioning whether an independence referendum could be held without Westminster’s consent – saying it was ‘hypothetical, academic and premature’.

Martin Keatings brought the case to Scotland’s Court of Session on behalf of pro-independence group Forward As One, ahead of Holyrood’s election in May.

A two-day hearing last month heard from Aidan O’Neill, who was acting on behalf of Mr Keatings. He argued that voters needed to know if such action is possible.

Lady Carmichael has now dismissed the case, ruling it was ‘plainly raised prematurely’, with the question of another referendum ‘also hypothetical, and may never come to pass’. 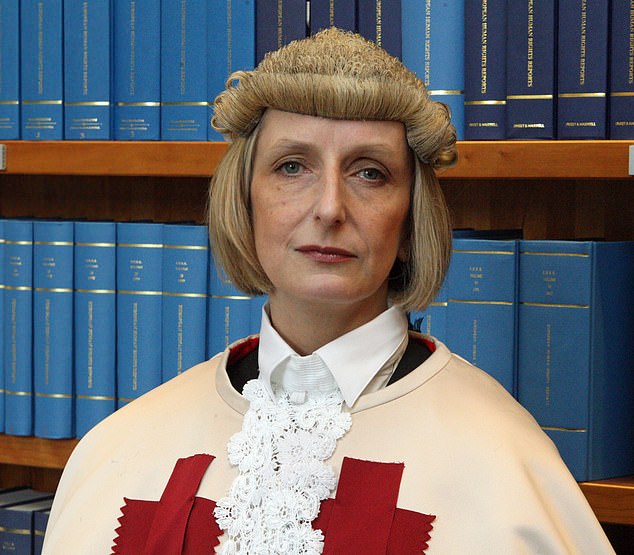 Lady Carmichael has thrown out a case asking whether Holyrood had the power to legislate a second independence referendum, her decision said the case was ‘hypothetical, academic and premature’

In her decision published on Friday, she said: ‘The defenders’ submissions on these matters all express in slightly different ways the underlying proposition that it is either not necessary, or not possible, for the court to provide this pursuer with the remedy that he is seeking.

‘The action is for these reasons, hypothetical, academic and premature, and the pursuer lacks standing to bring it.

‘For the reasons given… I would have reached the same conclusion even if a draft Bill were available for consideration.’

Lady Carmichael added that the court would intervene if there was any future allegation that Holyrood had acted unlawfully by forcing through a referendum.

‘Having reached the view that I have in relation to standing, prematurity and the hypothetical nature of the proceedings, I do not require to determine whether to grant the declarators sought would have been incompatible with the separation of powers.

‘It is, however, important that matters which may properly be the subject of political debate and campaigning in the democratic process are permitted to unfold and be worked out in the political process, and that the courts intervene only when they need to do so to fulfil their function as guardians of the rule of law.

‘The courts will clearly intervene to determine allegations of unlawfulness.

‘Where, however, there is no allegation of unlawfulness, and the court is asked for a determination as to the state of the law in an area which is the subject of current political debate and controversy, it will be important to ensure that the question of whether an answer is required in order to protect the rule of law is addressed with rigour.’

The judge said it is ‘unnecessary and would be inappropriate for me to express an opinion on the question of law’ given the case was based on an ‘assumption that a referendum is to be conducted, or has actually already been conducted, under an Act of the Scottish Parliament’.

In addition, no view was taken on ‘the intentions of the Scottish Government’ in regards to any draft Bill.

She said both ‘the first defender and the pursuer to some extent asked me to speculate… that would not be determinative of whether there was an issue of law on which the pursuer was entitled to a ruling from the court’. 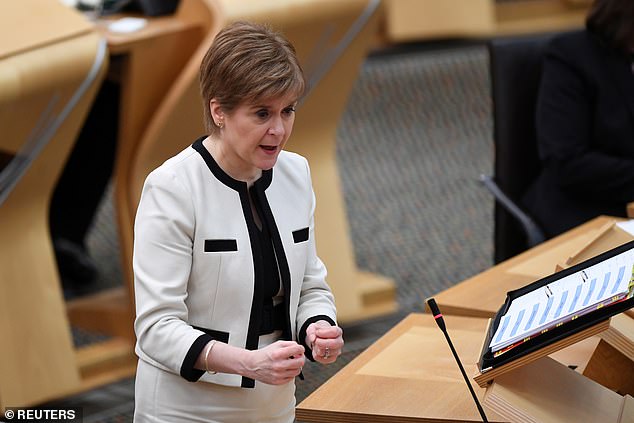 The case was brought on behalf of pro-independence group Forward As One, which argued voters needed to know what powers Scottish parliament has ahead of May’s election. Pictured: Nicola Sturgeon addressing parliament last month

On Mr Keatings’s standing, the judge said it is ‘relevant to note… the pursuer is an enfranchised voter in a system of representative democracy’.

While she said ‘he and every other voter has the right to vote for representatives in the Scottish Parliament’, she added ‘it is correct to say that Parliament derives its authority, strength and legitimacy from the electorate’.

Lady Carmichael concluded by highlighting that elected members are the ones ‘who then go on to make judgments, in their capacity as legislators’.

A legal opinion for Forward As One was first published by Mr O’Neill in December 2019, on the constitutionality of the issue after Prime Minister Boris Johnson refused to grant a section 30 order under the Act to pass laws normally reserved to Westminster.

One had been granted by the UK Government ahead of the 2014 independence referendum, in which Scotland voted to remain part of the UK by 55.3% to 44.7%.

Mr Keatings is standing as an independent candidate for Mid-Scotland and Fife in the May 6 vote.