A couple who were attacked for intervening when a gang of youths kicked their pet dog in the face have spoken of their ‘terrifying’ ordeal.

Amber Cole and Adam Stevenson were hospitalised after the ‘brutal’ assault in Dorset and say their Staffordshire Bull Terrier puppy, Luna has been left traumatised.

The couple were out walking with Luna at a beauty spot in Poole on Sunday afternoon when a group of five youngsters grabbed hold of Luna and started kicking her, prompting the couple to intervene before being violently attacked themselves.

Dorset Police are urging witnesses or anyone with information about the ‘nasty incident’ to come forward. 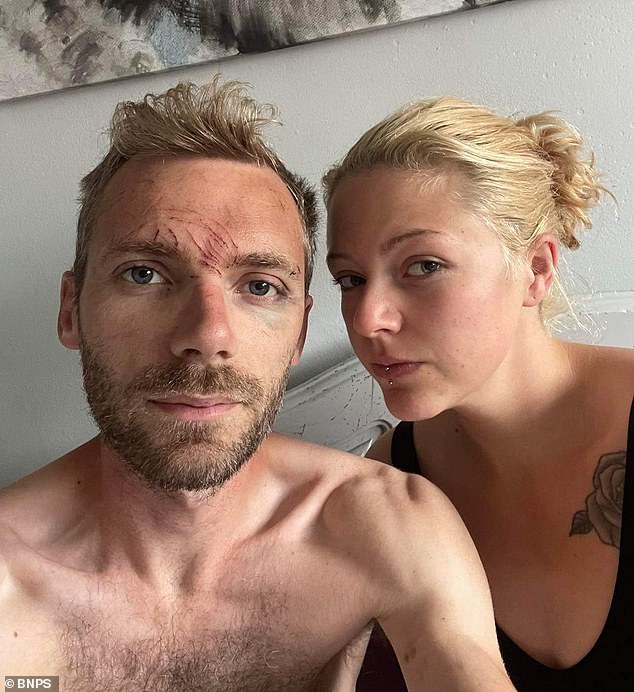 Adam Stevenson and Amber Cole were left with numerous injuries after they intervened when a group of teenagers started attacking their dog while out walking at a beauty spot in Poole, Dorest, on Sunday afternoon 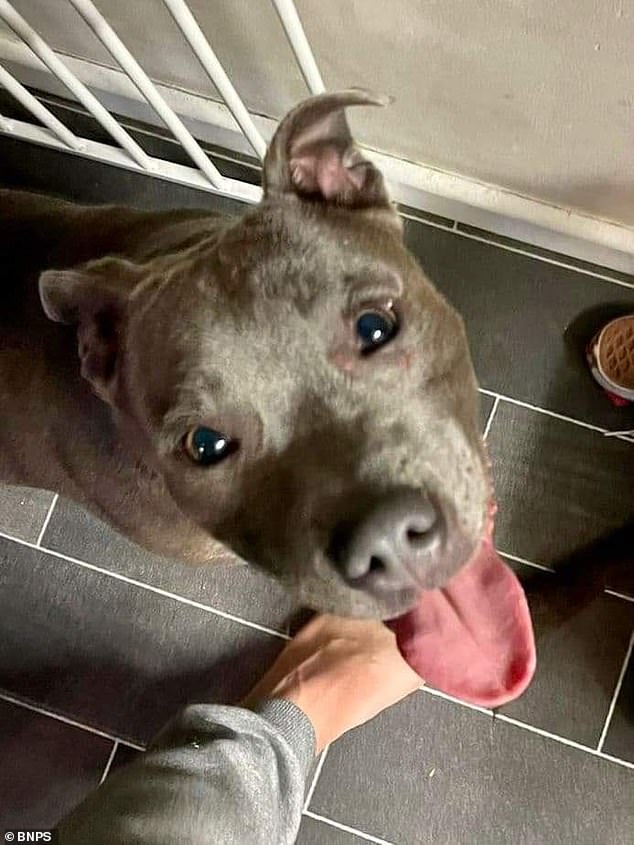 Luna, an eight-month-old Staffordshire Bull Terrier, was grabbed by the group of youths who then proceeded to kick her. Her owners said she has injuries to her eye and is showing signs of trauma

Mother-of-two Amber, 25, was left with swelling and bruising to her face and internal injuries to her ribs.

Meanwhile Adam, 33, suffered tissue damage to his foot and a laceration above his eye which has caused vision problems and may require surgery.

The pair had been out walking at Bourne Valley Park at around 6pm when eight-month-old Luna approached a group of males, thought to be between the ages of  13 and 17.

One of the teenagers held the dog while another kicked her in the face.

When Amber jumped in to stop them, one of the youths hit her in the head and then another grabbed her shoulders and kicked her in the chest.

When her partner, Adam, stepped in to protect her the youths ‘jumped on him and threw him to the floor’, delivering repeated blows and kicks. 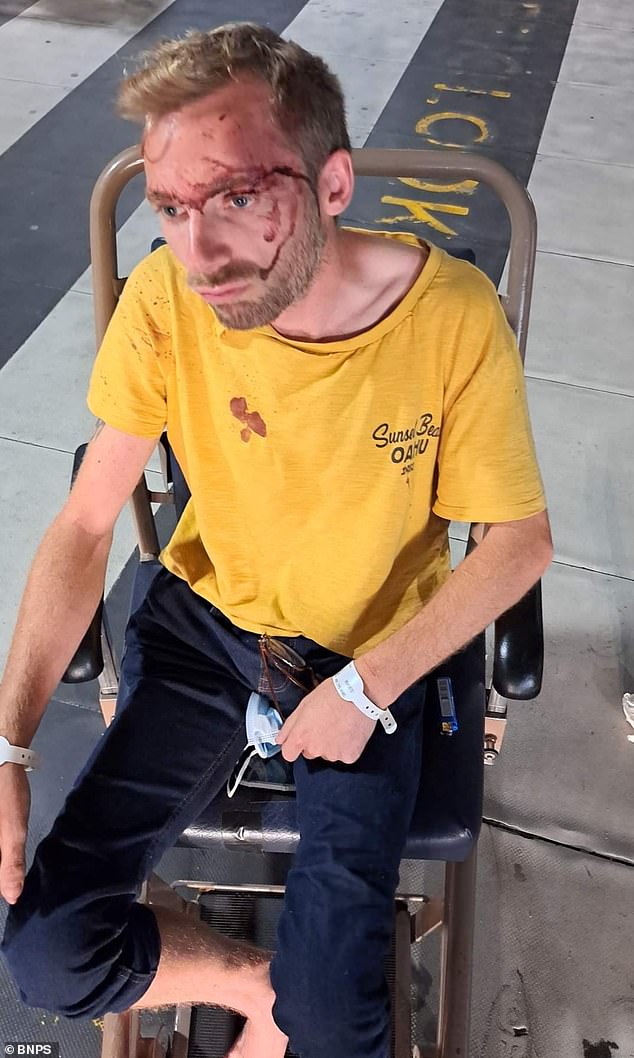 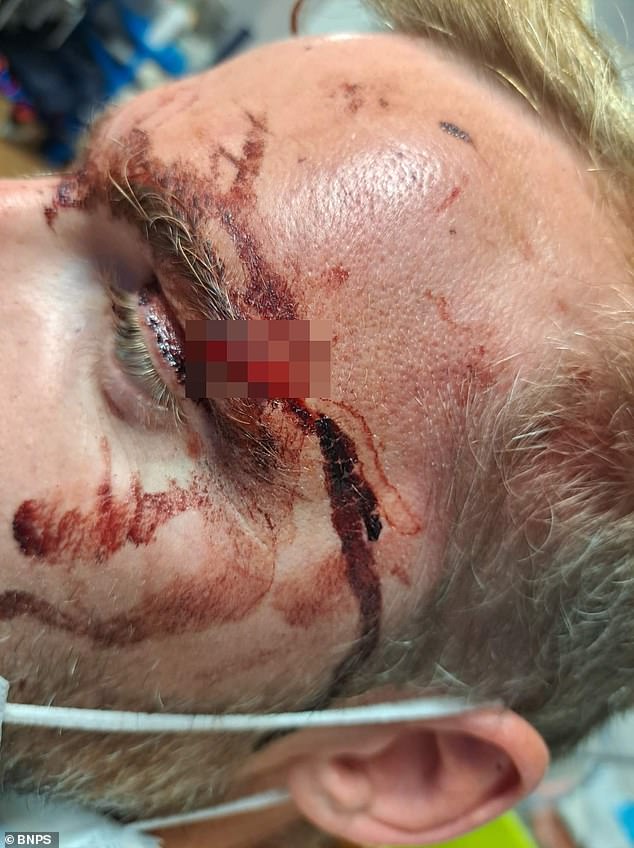 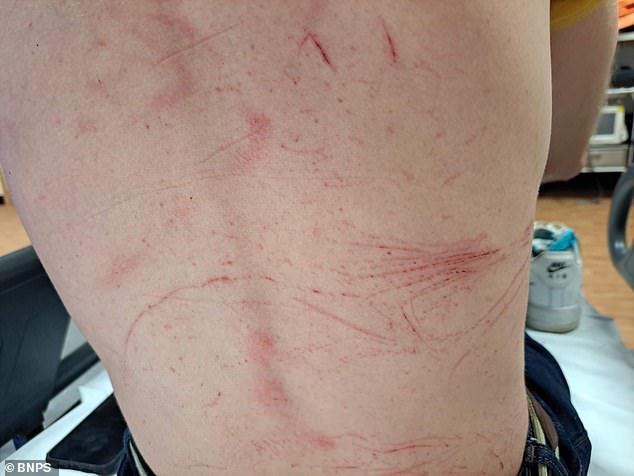 The group then ran off in the direction of a nearby skate park and Turbary Road.

Recalling the incident, Amber said: ‘There was absolutely no reason for it, my puppy didn’t jump on them or anything.

‘She screamed when they kicked her. I ran up and said ‘get off my dog’ at which point I was smacked in the head a few times.

‘The eldest of the gang grabbed me by the shoulders and started booting me really hard in the chest with the bottom of his shoe.

‘He said he doesn’t care if I’m male or female and that he will kick my head in.

‘It was terrifying. I was just thinking this is going to end badly. It has left me with internal injuries in between my two ribs. I’ve got lots of swelling and bruising on the side of my face.

‘Adam stepped in and they jumped on him and threw him to the floor. They repeatedly punched and kicked him.

‘He has a lot of damage internally to his foot, a laceration above his left eye which has caused vision problems because of the repeated blows he received. His back is pretty nasty too.

‘He has to speak to a facial surgeon because where he was repeatedly punched near the eye, it will require surgery. 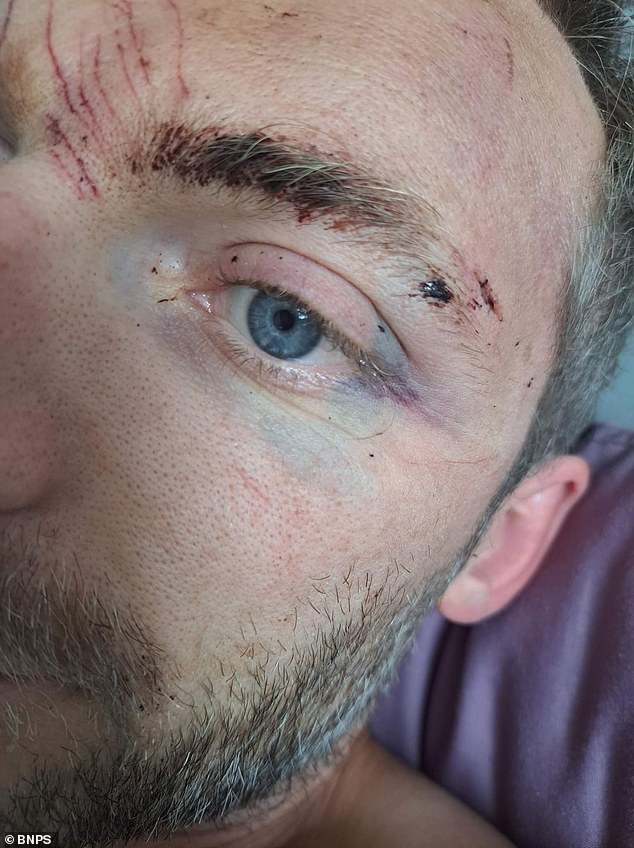 ‘They were so intent on causing as much damage as they could. Before it rained, there was blood everywhere.

‘My partner lost a lot of blood, his blood pressure dropped. As you can imagine, he is in a lot of pain and discomfort.

‘They thought it was hilarious. The youth today have no respect for other people. They are fully intent on hurting people.

‘It’s a place I take my two young children for walks. My kids won’t understand why they can’t go to the park again.

‘They won’t understand why mummy is all bruised and cut up with lumps and bumps over her. How do I explain that to two young children?’

Amber said she is now too scared to take her children, who were not present at the time of the attack, to the park.

Adam, a cavity wall technician, is on crutches and is currently unable to work following the assault.

He added: ‘They threw me down this bit of a hill with brambles so I’ve got scratches all over my belly and back.

‘I tried to get up but hurt my foot so I couldn’t get my balance and they just kept knocking me down. I tried to block my head as much as I could, I managed to protect my nose but they hit me so many times in the side of the face.

‘It was absolutely brutal.’

Luna also suffered injuries under her eye and some fur loss.

Her owners said she is showing signs of being traumatised and requires further treatment from the vet.

Dorset Police are urging anybody with information that could identify the teenagers to come forward.

Police Constable Louis Allen, of Poole police, said: ‘This was a very nasty incident and we are carrying out a full investigation to identify those responsible.

‘I am appealing to anyone who was in the area and witnessed what happened to please get in touch.

‘Also, I am keen to hear from any residents in the vicinity who may have relevant home CCTV footage to help my enquiries.

‘I fully understand this incident will cause concern in the local community and officers from the local neighbourhood policing team can be contacted with any issues or information.’