Elizabeth “Betty” Joan Norton (nee McCracken) was born in Tatura in 1927. She was one of 10 children now all deceased. Early life on a dairy farm was full of chores and adventure but made uncertain as her father most probably had post-traumatic stress disorder after serving in the trenches in France during WWI.

Going to the small local school involved a horse and buggy bulging with her siblings. After school, she followed her elder sisters into nursing at the Mooroopna Base Hospital, an 18-mile bike ride from home. As a nursing sister she was responsible for 40 patients – the work was more patient care then as opposed to para-medical today.

Social life included dances where the local eligible gents lined up to try their luck with the nurses. At such an event, she met young Mervyn Norton – romance blossomed.

An article “Nurses’ return social” that appeared in the Shepparton News of the day provides an insight: “The hall was gaily decorated with branches of gum tree and palm fronds extending around the walls and multi-coloured streamers hanging from the ceiling.

“The bathing beauty contest was won by Mr Geoff Freer, who wore an attractive two-piece play suit … Mr Mervyn Norton, who “missed out” and could only find two towels and successfully managed to drape around himself.

“The Monte Carlo, that was conducted in aid of Miss Goulburn Valley was won by Miss McCracken {probably Hilda, Betty’s older sister} and Mr Ted Fleming.

“The raffle for ducks donated by Mrs McCracken from Tatura {Betty’s mum} was also won by Mr Ted Fleming and donated to the nursing staff.

“Nurse Betty McCracken … thanked all those present for attending and making the evening such a success. A delicious supper brought the proceedings to a close.”

They soon became a couple around town as they went for evening walks, often ending up on the Kiala bridge overlooking the Goulburn River.

They were married on Remembrance Day 1950. They set up home on the family farm “Menzies” on Echuca Road where the high school stands today. Their own family soon followed with Meredith, Pamela and Jeffrey. She loved to cook for one and all with chocolate and lemon puddings being family favourites and sponge cakes presented when friends visited.

Later, the farms were sold to enable the children to be educated in Melbourne for she saw this as a necessity after the local high school floated a four-day school week and limited subjects. The family home moved to Shepparton where, “free” of children, she developed an interest in gardening. She spent hours working away and enjoying the results as well as helping neighbours and friends with tips and cuttings for their own gardens. She loved the colours of autumn. 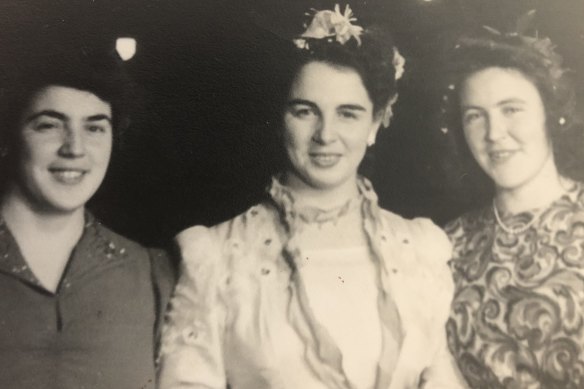 Betty Norton (centre) with two of her sisters.

She discovered lawn bowling and won club championships at Mooroopna, Shepparton, Tatura and Ivanhoe, often teaming with Mervyn or Meredith and her grandson Robert. She was always looking to encourage new bowlers and mentored many. Practising with Mervyn gave her great pleasure.

Unfortunately, over her last 15 years she developed dementia and was lost emotionally to the family. She passed away peacefully at Doncaster at the age of 95. She was predeceased by Mervyn who can also be considered as a victim of dementia in that he was broken-hearted when his wife and love couldn’t recognise him any longer.

She was survived by her grandchildren Robert, Kate, Melinda and Sarah and great grand-children Selwyn, Harrison, Alby and Ledger.