A coronavirus conspiracist charged with giving false details to police during a COVID-19 lockdown wants the case against her thrown out, partly because officers incorrectly listed her gender as male.

Eugenia Limberiou, also known as Eve Black, last year filmed herself celebrating after she refused to give a police officer her details and was told to drive through a coronavirus checkpoint in Bunyip, south-east of Melbourne. 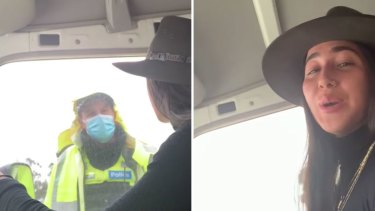 Eugenia Limberiou, also known as Eve Black, in her interaction with a police officer in Bunyip.Credit:Screenshot

Her actions drew widespread condemnation from police, the state government and the public.

Six days after the incident, on July 29, officers pulled her over in Carlton and arrested her when she allegedly refused to give her details.

Ms Limberiou took part in a remote hearing before Melbourne Magistrates Court on Tuesday that was interrupted by the sound of a squawking parrot.

She was represented by a man who told judicial registrar Alison Paton he was a paralegal and acting on his friend’s behalf.

The friend apologised for the parrot noise.

Ms Limberiou, 28, is charged with failing to show police her licence and giving a false name and address, but her friend told the court the case against her was misleading and police had ticked her gender as male on the charge sheet.

The friend said the charge against Ms Limberiou should be struck out.

Police allege Ms Limberiou refused to state her name and address when pulled over in Carlton and insisted she record the interaction on her mobile phone.

“She was argumentative and unco-operative and wound up the window and locked the door, refusing to acknowledge or respond to police requests,” a summary alleges.

Police allege they warned Ms Limberiou they would have to break the window if she did not comply, before using a device to shatter the driver’s door window. The woman was then dragged from the car, handcuffed and arrested.

She was fined $1652 for travelling during lockdown without a valid reason.

Ms Limberiou, who has previously posted on social media her beliefs that the coronavirus is not real and a “scam”, now lives in Brisbane and is due to appear before the court again on July 1.